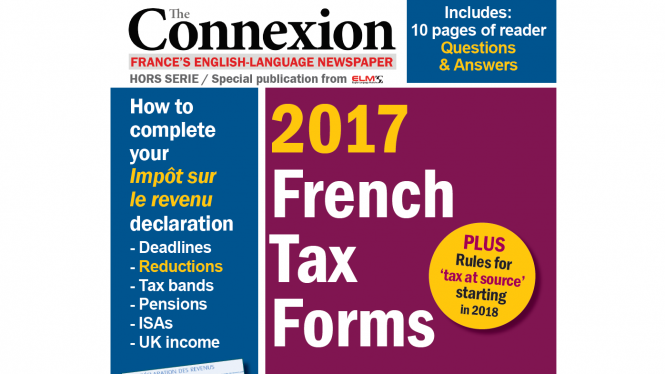 The addendum here is for our 2017 Income Tax guide and is produced to complement and update the wording of the guide, but does not replace it. It is produced because at the time of publishing our help guide the final versions of this year's forms had not been released. Our help guide is still on sale at this link.

Please note also that this year’s declaration deadlines have now been released.

The online declaration service opens on Wednesday April 12 at impots.gouv.fr and paper forms will be arriving / available at around the same time.

The deadlines for online declarations for residents of France are:

This year there is a new form for tax credits and reductions - 2042 RICI, which stands for reductions d’impôt crédits d’impôt.

In a previous year’s reform the tax authorities moved claim boxes for eco-friendly home renovations from the main 2042 to a new form, 2042QE. Claims for some other kinds of income tax credit (home help, gifts to charities…) were still made on the last page of the 2042, section 7.

As of this year’s declarations the 2042QE is abolished and section 7 has been deleted from the 2042. The 2042 RICI replaces these.

If you have tax credits to claim the 2042 RICI should be completed and signed at the bottom with the place and date.

The boxes for claiming tax credits for charities located outside France in the EU have moved from the 2042C to the second page of the new 2042 RICI tax credits and reductions form.

On the paper version of the 2042 the box for giving additional information to the tax office on page 2 is not labelled E this year and is now called Eléments complémentaires.

There is a new box in section 1 of the main 2042 form, for pensions from abroad that attract tax credits (including government pensions). This may be to help avoid the problems discussed on page 27 of our annual tax guide; in other words to make sure that if you insert these pensions on the main 2042 form there is no confusion between foreign ‘tax credit’ pensions and other pensions.

After declaring these on the 2047 form as usual the appropriate box on the 2042 is now 1AL/1BL (not 1AS/1BS as for French pensions). As a result of this it is not necessary to add a note to the tax office as suggested on page 44 of the guide.

Other UK pensions, assessable in France, are declared in a new foreign pension box on the 2042 (after declaring on the 2047 foreign income form) at boxes 1AM/1BM (not 1AS/1BS).

Work done in the UK by French residents

There are new dedicated boxes on the 2042 for declaring foreign work income earned by French residents, notably at 1AF/1BF for salaried work done in the UK which was taxable in the UK and which is eligible for a tax credit for French income tax.

As for UK government pensions, new boxes have been added specifically for this kind of income on the 2042 and in the 2042C PRO. As a result, it is not necessary to add a note to the tax service such as suggested on page 44 of our 2017 income tax helpguide and if inserting this income on the 2042 form(s) the following boxes are now suggested instead the ones for income of French origin.

Rental income: The tax service advises using box 2042, 4BL for carrying over amounts of UK rental profit that have been declared to the UK.

Letting income: The tax service advises that the profit from furnished letting as declared to the UK should be declared at 2042C PRO, 5EY (if you use the services of a centre de gestion agrée or the similar viseur or OMGA services) or otherwise 5EZ.

There have been some changes to labelling in the 2047 form page for this income, affecting some of the instructions on page 46 of our 2017 guide. As a result to avoid confusion use the following updated version instead of the wording on that page.

Write "RU" (for Royaume-Uni - the UK) in line 201 (pays d'origine); then in 203 write the net income from all relevant UK dividends; then in 204 the official dividend tax credit percentage rate from the countries list in the 2047 notes; then multiply the income by the rate to work out the credit and insert this in 205 and then actual UK tax paid in line 206 (probably zero).

(You can do the same in the extra columns provided if you have income from other foreign countries). The smaller of the two figures – tax credit or actual foreign tax – should be inserted in 207 and then the total of incomes from 203 and tax credits from 207 is inserted at 209.

The above two income kinds, and French dividends, are also declared at:

Dividends from French shares and qualifying UK shares and unit trusts are declared gross in box 2DC (This is the figure from line 209 on the 2047). Non-qualifying ones go in 2TS (from line 221 on the 2047). If you claim any allowable expenses with regard to investment income, these are inserted on the 2047 at line 251 before they are carried to the 2042, box 2CA. These allowable expenses need to be justified. The figure from line 253 on the 247 is carried to box 8VL at the end of the 2042.

With regard to any foreign investment income which has suffered tax deductions at source, the total foreign tax (or the tax credit) from form 247, line 253 needs to be transferred to the main 2042 form, last page, section 8, box 8VL.

Please also note that if you have non-French investment schemes which you opened, closed or used during the year you should also make this known on form 3916, as mentioned above.

This year the tax service says you will be obliged to provide bank RIB information before finishing your online declaration (though it might not be necessary if you have supplied this before). In which case keep one to hand (spares are usually provided inside chequebooks), for the relevant details such as IBAN number etc.