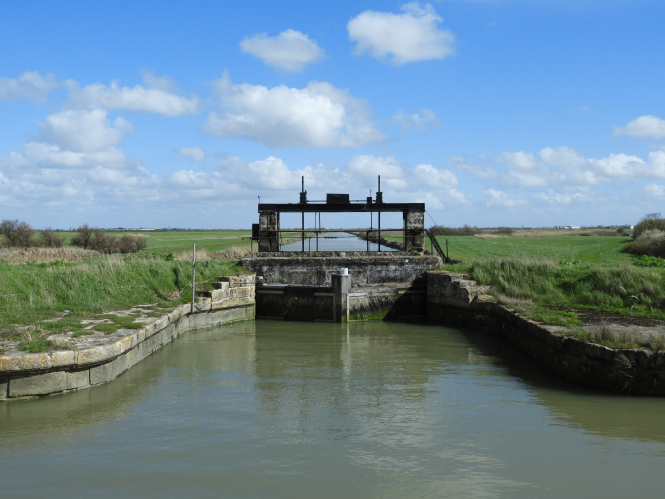 It extends across three departments, the Vendée, Deux-Sèvres and Charente-Maritime, and is divided into three areas: the wet marsh – also known as France’s Green Venice – the coastal zone, and the agricultural dry zone.

Officials in the Vendée are drawing up an inventory of all its heritage sites and their work has revealed many architectural features linked to the draining of the land, including the canal systems, dykes and several canal gates which have been used since the Middle Ages.

This early system still functions, even though the area has been in constant danger from natural forces or war, and the drainage system has been repeatedly destroyed and rebuilt.

The department’s chief heritage officer, Yannis Suire, knows the region well as some years ago he studied the hydraulic features for his PhD thesis.

He said: “The same principles have been used to keep the sea at bay since the end of the 12th century and though the original wooden gates have long since rotted, we know that many of the existing ones today are on the same sites, and built in the same way, and pre-date more recent systems in the Netherlands.”

The oldest existing structures date from the end of the 18th century. There are 13 near the village of Puyravault, which were all built in the same way.

A wooden platform rests on wooden piles which were sunk into the mud. Some of these are undoubtedly originals, in the same way that Venice rests on old piles still intact after centuries of submersion.

Then there are stone supporting walls on each bank – and between them the wooden gates which are pushed shut by the force of the water at high tide or during violent storms, and open again when the waters subside. The two gates are built so that they close against each other to become watertight, forming a V pointing downstream, which makes them stronger than if they shut flat.

Usually a house was built nearby to lodge a lock-keeper. Records show the Port de l’Epine was first built in the 13th century and there are records from 1694 asking for permission to build a cow shed against it. In 1884, it was rebuilt to allow cart access.

Another was on the Canal de la Banche. The structure was not, however, easy to build. Stone from quarries in the Charente and wood from nearby forests were brought by boat to avoid the marshy land.

Work was interrupted by the tides and it is not easy building in mud and water. Mr Suire said 19th century documents record the difficult working conditions, and he said he could imagine it was even more difficult in earlier times.

Only wealthy landowners could afford to tame the marshland by paying for labour to dig the canals and build the gates. At first, in the late 12th and 13th centuries, monasteries undertook the work as they knew that valuable pasture and arable land lay underneath the water.

One of the canals is still called Canal des Cinq Abbés as its construction was funded by five abbeys which grouped together in 1220. Other canals dug out by hand were the 20km Ceinture des Hollandais in 1283 and the Canal du Clain, which is one of the oldest still in use today.

Dykes built along the Aiguillon Bay have been repeatedly breached and rebuilt through the ages. Dykes were also built along each side of the canals, with tracks along the top of them to act as roads. During the Hundred Years War, many of these works were destroyed.

In the late 15th century the king ordered repairs and a royal official concluded that this was “a very good land, fertile and abundant with wheat and other fruit and farm animals of all kinds”.

In 1599, a report into the state of the marshes, near Aiguillon Bay, indicated that a gate from the Bot Neuf canal had been taken away by Protestant troops and its replacement was urgent.

In the 17th and 18th centuries, the dry marshes were an important region for wheat, the bread basket of Poitou, despite storms in 1616 and 1671 which caused massive sea flooding and destroyed crops. After the revolution, a syndicate was formed to maintain the defences.

During World War Two there was more damage, which was subsequently repaired, only to be destroyed again by Cyclone Xynthia in 2010. Despite the constant battle to keep the canals, dykes and gates functioning, the dry marshes are still in existence and the drainage system, although renovated, is basically the same.

Mr Suire said important lessons have been learned: “Man has been constantly working to reclaim the sea here, and from the first they understood that this was only possible through enormous effort.

“If they built houses, they built them on raised land and built ditches round them to protect them. The dykes and the canals were intelligently planned.

“The gates were solid constructions – not like some building works we see on flood plains today. This is not just history, it is relevant today.”