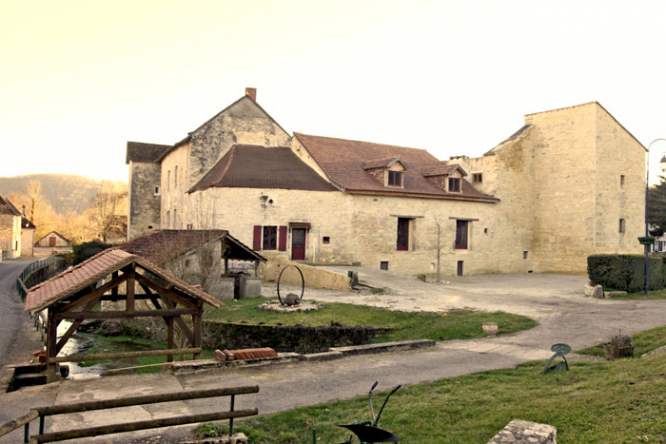 A chateau rebuilt as part of a massive project by an Englishman and his French wife was featured in a TV show where B&Bs and gîtes are judged by other owners.

The TF1 show, Bienvenue en Famille, was “a lot of fun”, said Adrien Wood – known as Woody – even though their B&B business did not win. As a consolation, they did win a section on the best presentation of rooms.

Woody, 67, has lived in France for 35 years, and fell in love with the chateau in the Lot in 2005. He runs the B&B with wife Manay and her daughter Emma.

He first lived in Brittany, working as an entertainer and DJ, while also doing up houses. But he was living near Nîmes and had already restored and sold on four houses by the time he saw the Château de Saint Chamarand, in Saint Chamrand near the Lot-Dordogne border.

“It was nearly a ruin but I thought that with the skills learned on the houses, I could work on a chateau,” Woody said.

He was helped by his brother Julian, who died three years ago from lung cancer.

“A lot of the work was basic restoration – you start on the roof, and we did three of the five on the property,” he said.

“Then we also started to make some changes to the interior layout, knocking down a wall here to make a room, and building another one there.”

The chateau dates from 965, and notably had Louis XIII stay a night in 1632, when on his way to Toulouse to punish Henri II de Montmorency for conspiring against him. It was abandoned during the Revolution, beginning a long decline.

After eight years of work, the property was ready to open for B&B and its gîtes, although work still continued. “There is a cellar I have not touched,” Woody said.

Letting the gîtes and bthe B&B were made easier by new technology and smartphone apps.

“What made a big difference was the arrival of online sites such as Airbnb and Le Bon Coin. I was mainly on booking.com and I was not happy for a number of reasons, but things are better now, and we get a lot more French people staying here.

“It is not anything we did consciously to appeal particularly to French people, it just took off with Airbnb and Le Bon Coin.

“Airbnb takes a lot of the money when people book through them, 20% when all counted, but it works and the few problems we’ve had have been sorted quickly.”

Woody married Manay last September. After a health scare, he has decided to sell up and downsize, with the chateau on the market at €750,000.

“A lot of my life has gone into saving this building and getting the gîtes and B&B up and running as a business,” he said.

“But it is also a lot of hard work, and I feel the time has come for me to start to take things a little bit slower.”