Building a home in France with glorious, good wood 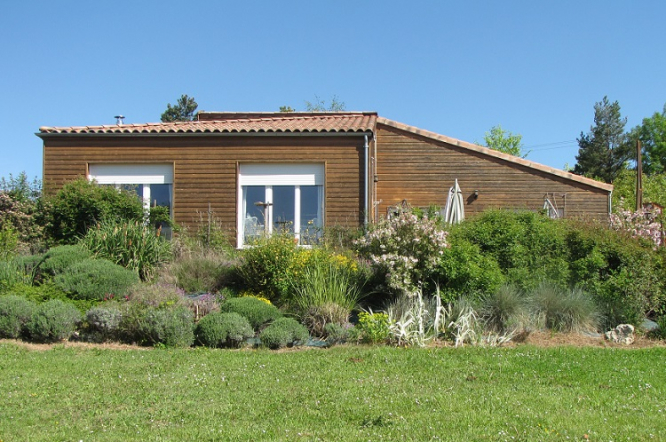 Around 14,000 are built each year, representing around 4% of the total newbuild houses.

It is not just builders of mountain chalets who turn to wood. There is also a steady market for bungalows and storeyed houses, most of which look similar to conventional homes.

Houses in France were traditionally built out of stone, with bricks, especially red ones, popping up where there were local sources of clay.

Now, almost all are built using concrete blocks, hollowed out to take poured concrete and extra reinforcement in the form of steel rods.

Old wood-framed houses are generally kept as relics of the medieval period in picturesque town centres such as in Honfleur, in Normandy.

They were lucky to survive. Most wood-framed houses in Caen and other towns were destroyed in World War Two and rebuilt in concrete.

Frédéric Robert, owner of Quadrapole, said: “Most people who build wooden houses do so because they are ‘greens’ and want to put their money where their hearts are.”

His company is unusual because, while the design and construction is in France, the initial carpentry is done in Poland.

“I was running a simple joinery company when I met a Pole at a trade fair and we started talking,” he said.

“The initial attraction was the lower wages and the ease of setting up a factory in Poland compared to France, but wages there have gone up because there is now little unemployment.

“It is now rather the quality of the work we get from our team over there, most of whom have been with us since we started there 12 years ago.”

Most wooden houses are built on concrete foundations with posts forming the framework fixed into the concrete. The outer walls, made of tightly fitted overlapping wood, are fixed to the framework, before insulation and the inner walls are fitted.

“These are techniques which have been used for years in the US,” said Mr Robert.

“Where we are different from some of our competitors is that our prices are more or less the same as for a house built of concrete, but the quality is higher and the houses are individual designs, not out of a catalogue.”

Building regulations for a wooden house are the same as for a house of any other material, with an architect’s approval for plans required if the floor area is above 160 metres square.

In most areas, the main restrictions are on the colour of paint used on the wood, if the house is painted. Many planners specify that it must blend in with the landscape.

On the other hand, if wood is left varnished but not painted, approval is likely.

Wooden houses often score higher on energy-saving tables than concrete ones because insulation is built into the walls and roof from the start, and because wood prevents heat transfer more than concrete.

Most wooden houses cost the same as equivalent hard houses, with the average national price to build being around €1,500 per square metre.

Other outlets promoted for French wood include laminated wooden beams used for the main structural elements for large buildings.

After living in a cold stone longère farmhouse, moving to a warm wooden house was bliss for Connexion reader Sue Wigham.

She and her husband Ray moved to the Maine-et-Loire in 1993 and regularly woke up to frosty panes before they installed double-glazing and other insulation.

“But even with the improvements, the stone house was cold in winter,” Mrs Wigham said.

“We did not mind until we started getting on a bit, which is when we decided we wanted a smaller, wood house. It had to be a wood house, but I don’t know why – it is an idea we had.”

They bought a plot of land in 2007 but then had to wait three years for the longère to be sold.

In the meantime, they visited a maker of log cabins in Vancouver, but felt the complexity of getting the building kits and builders over to France, and the difficulty of getting a 10-year new house-builder’s guarantee meant a Canadian log cabin was too great a risk.

Instead, they hired a local architect, found through their estate agent, to supervise construction.

It brought the frame and walls to the site in three lorries, and put up the basic structure in three days.

Just as work was starting, Ray was diagnosed with cancer. Completing the house took 11 months, by which time Ray was spending most of his time in hospital.

“We only had a couple of years together to enjoy it before he died,” she said.

The house is warmed with a log-burner stove, and is “lovely and warm in winter”, she said.

She recently benefited from the government’s €1 insulation scheme for her roof, which further improved its heating efficiency, and is considering moving to a pellet stove because logs are “getting hard to handle”, at age 68. “It is a lovely house – we asked for wider corridors and doors than normal, and it meets my requirements perfectly,” she said.

“After a hip operation, I thought of moving but then took it off the market. I do not see myself living anywhere else.”

In total, the house cost €283,017 and the land €19,800, which works out at around €1,500 per metre square, whereas similar-sized architect-designed concrete-block houses in the area are built for around €2,000 per metre square.

When Mike and Judith Wood downsized from their five-bed French farmhouse with seven hectares of land, they decided to build on a plot where permission for a newbuild was available.

Mainly for environmental reasons, Judith wanted the house to be built of wood (see home pictured above, and main picture).

Mr Wood, 83, a former marketing director in the UK, said: “It is solid, warm and energy-efficient, and we are very happy.

“We went to the architect with some basic ideas of what we wanted and he came back with not only plans, but also a model, which was almost exactly what we had in mind.”

The wooden house rests on concrete piles, due to the sloping ground. Most of the frame is oak, although the central beam and key posts are of laminated wood which gives it the strength of a steel beam.

The outside is of pine planks, stained to an oak finish, and there is extra insulation in the walls and roof.

As well as the house, the couple built new stables and an indoor riding area (a manège), also of wood.

Using an air heat pump, the couple save €1,000 a year on their heating bills.

Insuring a wooden house against fire in France is the same price as insuring a house built of stone or bricks.

Wooden houses have to meet the same fire standards as any other homes in the country.

And, if the worst does happen, the way wood burns, with a carbon crust forming, means that it is relatively slow-burning compared to other materials.

“Firemen prefer dealing with wood rather than other materials because it takes longer to burn and can be put out more easily,” he said.

“Incredible as it seems, a fire in a concrete house is more difficult to deal with, because the heat goes through the walls quicker.”