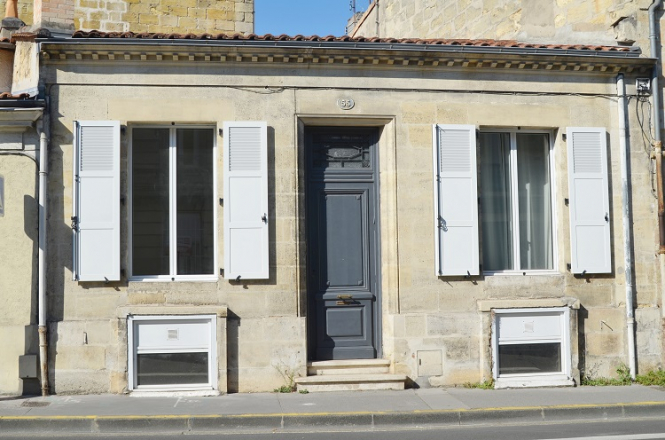 These single-storey houses are unusual for a big city, where land prices mean high buildings are the norm.

They are called échoppes and there are still streets which are predominantly made up of these small homes.

Around 25,000 were constructed in the second half of the nineteenth century up until the First World War. Many of them have been renovated and can now fetch prices of well over €500,000.

When they were built, however, they were for people of modest incomes, including hospital staff and the railway workers creating the new train lines and stations.

They were destined for a new working urban population which had left the countryside for the city and were often built by employers for their new workforce.

Their design was simple but they provided decent living accommodation. The front opened straight on to the street but the door was up some steps to be away from the roads below, which were often dirty and muddy as they were not tarmacked at the time.

At the back there was a garden, which could be 50-100m². Philippe Prévost, director of Bordeaux Heritage Tourism, says the gardens had a practical purpose: “They were nearly always used as vegetable gardens and created a link between the old rural life and the new city life. Often a family would have chickens or even a pig.”

There are two models.

One is the échoppe simple with one window next to the front door, and the second is the échoppe double with a front door with a window on either side. Both were single-storey, but many had cellars which protected the living quarters from damp and could be used for storage.

The échoppe simple had three rooms, with a bedroom at the front, a kitchen/living area at the back and a “blind” room sandwiched in between. A corridor ran down the side of these three rooms.

The échoppe double had a central corridor with various arrangements of rooms coming off this. The toilet was originally separate, often at the end of the garden. The houses were made of limestone. “This came from one of up to 1,000 quarries in the Gironde that were being worked in the 19th century,” said Mr Prévost. “The whole of the house was made out of stone, apart from some dividing walls which were sometimes made in brick. It was dressed and often had very elaborate and fine carving on the front.”

The word échoppe comes originally from the word choppa dating back to medieval Occitan and Gascon languages to mean a shop (though there is an example as early as 1482 of the word being used in the accounts of the city treasurer with the spelling eschoppe).

The term was used locally in the 16th and 17th centuries to describe buildings used by craftspeople who would live on the first floor and run their business and sell from the ground floor.

“It is likely that the English word shop is related”, Mr Prévost said. “Due to the trade between the UK and France at the time, many words were interchanged.

“In Bordeaux, the word choppa gradually changed spelling and meaning to be used for a dwelling place, rather than a shop.”

These modest dwellings are just one of the architectural features in Bordeaux which have made it a UNESCO heritage site. It is the most extensive urban environment in the world to be so honoured and it has 347 listed buildings, more protected buildings than any other French city outside Paris. The designated area is called the Port of the Moon, because the port of Bordeaux was situated on a crescent-shaped bend of the River Garonne.

Bordeaux has been prosperous across the centuries and has never been destroyed by war so it shows a unity in its architecture which has survived for more than two centuries from the 18th century. Most of it is in the classical and neo-classical style, so that even the échoppes, which were built later on, were designed to fit in with the existing architecture.

One of the best-known features is Place de la Bourse, which took 20 years to build in the 18th century.

The city had been surrounded by walls for centuries and this represented the beginning of a modern Bordeaux, breaking out of its medieval traditions.

It was the idea of Intendant Claude Boucher, who was in charge of the administration of the city from 1720 to 1743.

To make up the square, there are long and imposing buildings, the Hôtel des Fermes and the Hôtel de la Bourse, which run at an angle to the river and are separated by a central building.

It was designed to be a royal square and originally there was a bronze statue of Louis XV, which was melted down after the revolution and briefly replaced by one of Napoleon. Since 1869, the central feature has been the Fountain of the Three Graces.

When Victor Hugo saw it, he said: “This royal square is simply half of the Place Vendôme, situated on the edge of the water.”

The whole of the edifice is now reflected in a vast shallow pool which was placed there when the quayside was renovated in 2004.