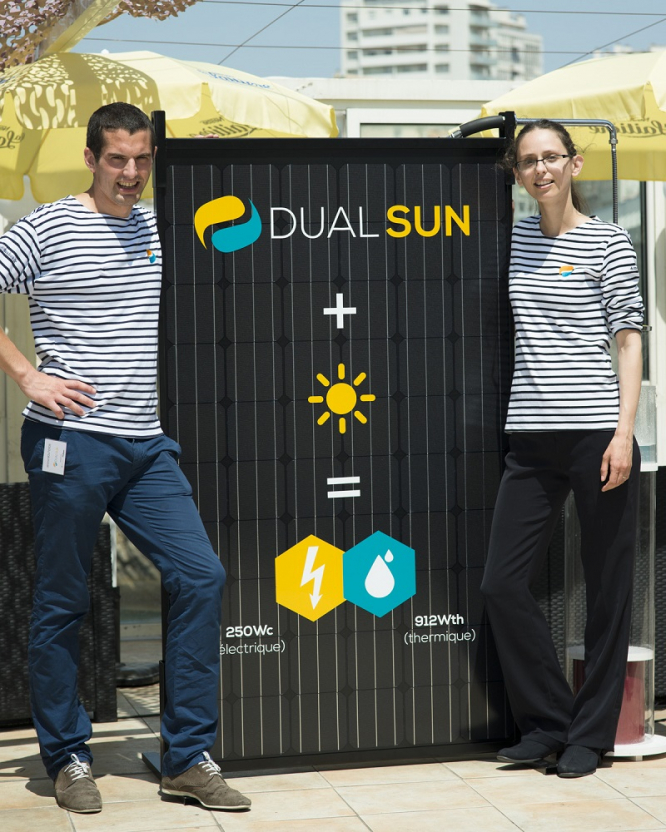 Engineering students Jérôme Mouterde and Laetitia Brottier came across the concept while studying in Paris in 2010 and started the DualSun company to develop it.

Their enthusiasm came from research that showed that liquid cooling of the photovoltaic panels increased their efficiency and lifespan.

When the liquid is then used to provide hot water, the total amount of energy produced is two-and-a-half times that of an ordinary photovoltaic panel.

Mr Mouterde said: “It took a long time to get certification in 2013 and to meet the strict safety standards which apply when you have electricity and fluids in close proximity.

“We have four patents for our panels and welcome other people starting to produce hybrid panels using different technology. The more people who know of the concept, the more the market will grow. The more efficient systems are, the better the environmental impact.”

Most of the installations of DualSun panels use a pump to help move the cooling fluid to the heat exchanger for the hot water system, but some work simply using convection.

The company says that in most places in France, between four and six panels, covering 10m2, will provide a four-person house with enough electricity for their own consumption, with the excess sold to the grid, and 70% of household hot water.

After heating, providing hot water is the main use of electricity in France. Energy savings with these panels are usually found to be 50% higher than simply using photovoltaic-only panels.

The company has a network of skilled tradesmen for installations.

The cost of the panels and installation is about 30% more than for simple photovoltaic panels. “Our research shows that most similar electricity output photovoltaic panel systems cost about €8,000 and we are 30% higher than that,” said Mr Mouterde.

“But over the expected lifespan of a set of panels, we end up being much cheaper.”

The company (dualsun.com/en) has a factory near Lyon and is based in Marseille. It employs 16 people and has installed more than 1,000 panels. As well as domestic ones, these include campsites, municipal swimming pools, a mountain refuge and office buildings.

Investors are a mix of private and public individuals and institutions.

The main focus for the company is France but it is also developing internationally, with Hong Kong and Australia the first target markets.