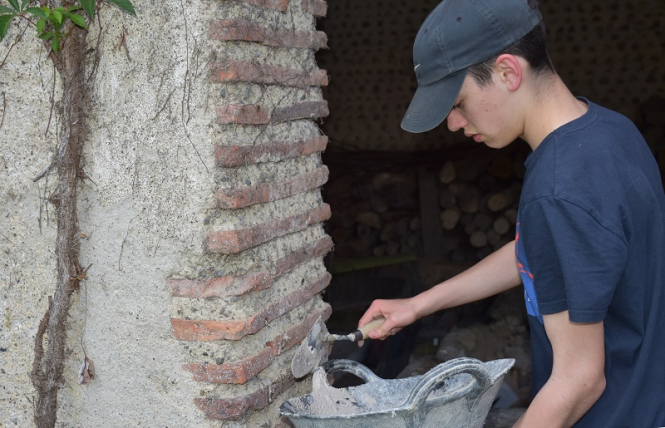 There’s a fundamental difference between an inter-war terrace house in London and a French farmhouse.

It’s not obvious but it is of more importance than it might first seem. Almost every house built in the developed world after the mid-19th Century is glued together with a Portland cement, whereas every house pre-dating the Industrial Revolution used lime (chaux, in French).

Cement sets quick and hard so modern construction companies prefer it but lime has two extraordinary properties of its own: it moves and breathes.

The reason why this old house has lasted so long with so few cracks is because the lime in its walls has adapted to the weight of the roof timbers, the two things working together over the centuries.

Lime is also held to be more friendly to the environment.

My friend Eric, grappling with his impossibly large house and sticking to traditional methods, is sure that using lime mortar is the only way to control damp in the walls.

It draws moisture upwards and lets it evaporate higher up.

This constitutes a system of natural air conditioning in summer. An ancient house can be deliciously chilly in August (but freezing in December).

Each type of architectural glue has its appropriate uses but generally they do not mix.

Cement combines well with modern forms of construction – for metal girders you would always use it, never lime.

To repair and restore an old French house, however, you need to keep to the original formula and use lime whenever possible. That means learning a bit about it. There are books about it but here’s a brief guide:

Broadly (there is a lot more to it than this), lime comes in two varieties – pure lime aérienne, which is white and used for rendering rather than structural work, and the far more common hydraulique lime.

This is off-white in colour and sets hard in contact with the air if left alone (depending on the thickness of the mortar and the weather).

The latter is classified with a natural hydraulic lime (NHL) number indicating its hydraulicity. Tell your builder’s merchants what you are going to do with the stuff and they will tell you which sack you need.

I usually keep both a sack of the average-grade NHL 3.5 hydraulic lime for repairs to the fabric of the house and a sack of Portland cement for outside jobs, such as laying paving stones.

With both cement and lime, the stuff you put with it is also important. Look at two old houses and the mortar will not be the same. In the old days, rich people demanded a lot of lime in their mortar but the poor used only the minimum.

The gloriously different tones of French farmhouses across the land are often due to the different colours of the local sand and soil that were mixed with the water or whitewash.

There is a lot of expertise involved in choosing the aggregate that is used to make a lime mortar so that it binds tightly, with a minimum of space left inside for air.

There are small manufacturers of lime in various parts of France that will give you advice.

Bigger companies, such as Socli and Lafarge, hand out printed information on how to use their products – mostly in French, of course.

A useful resource in English is the UK’s Society for the Protection of Ancient Buildings (www.spab.org.uk/advice/lime).