Cookie Consent by FreePrivacyPolicy.com French News and Views in English | The Connexion Most popular places to own a holiday home in France
6 may 2021
Classifieds Currency exchange Newsletter
Login Register BASKET
Facebook Twitter

Most popular places to own a holiday home in France If you have ever gazed into the windows of French agents immobiliers while on holiday, you’ll understand the temptation of owning a second home here.

Outside big cities, you tend to get a lot more for your money than in other countries, including the UK, and it’s easy to picture yourself enjoying a glass of wine on your own sunny terrace as the sun goes down on another busy day of relaxing.

But where should you look? A 2019 survey found that more than 45% of property in the Hautes-Alpes department, in the southeast of France, is now a holiday home, owned by French people, followed by 39.4% in island paradise Corse-du-Sud.

The figure is 37.3% in Savoie, and 35.3% in Haute-Corse, according to data published by the newspaper Le Figaro, from a report by research firm Elabe for mortgage bank le Crédit Foncier.

The Var department has the most second homes overall - in absolute figures - with 476,514 properties in the area (25% of its total housing) classed as second homes.

That's good news for department coffers, which relies heavily on income from taxe d’habitation - as announced in 2018 by then-finance minister Bruno Le Maire - taxe d’hab still applies in full to second homes, even as it is being phased out for primary homes. Also popular for second homes are Lozère (32.4% of total homes), Alpes-de-Haute-Provence (31.6%), Pyrénées-Orientales (28.7%), Aude (25.5%), and Ariège (24.7%).

Where to buy a second home in France

Here, we list three departments, and three towns and cities worth considering when deciding where to buy a second home in France.

Surely, 476,541 second homeowners cannot be wrong. If you're following in the footsteps of the countless people inspired by A Year in Provence, the Var is, without doubt, the place for you. It ticks all the Provencal-lifestyle boxes: history, tradition, delicious food and wine, festivals and events, villages so typically pretty they should carry a cliche warning, and a climate made for outdoor living.

Yes, Dordogne is so popular with British immigrants and second-homers that it has been saddled with the pseudonym 'Dordogneshire' - but there's a reason so many Britons head here. It's beautiful and charming, and easygoing - in a gentle, rolling, bucolic South Downs way. Just with much better weather. And food. And drink. Give it a chance. You'll be entranced.

Chamonix, in neighbouring Haute-Savoie, may hold the second-home crown in France's Alpine resort country, but Savoie is home to the country's largest number of ski hills - and that makes it the department to head for if your holiday home plans involve winter sporting it. And, even when the snows have melted, it's a perfect place to visit on a long or short break from it all.

Capital advantages. Parisian style. It's a near-unbeatable combination. The City of Light has it all, and more. Every arrondissement is different - so choose the one that fits your second-home lifestyle best and enjoy… and make money by renting out your pied-à-terre when you're not there. Win-win.

One of the oldest towns in France, fashionable Agde is known as the la perle noire de la Méditerranée because of the distinctive black basalt used in local buildings, including the cathedral of Saint Stephen, built in the 12th century to replace a 9th-century Carolingian edifice - which itself was built on the foundations of a fifth-century Roman church. Pretty, warm, and casually chic, it has everything for second-home owners to enjoy - including the rental potential when they're not home.

Due to the unique microclimate of this region, you can enjoy a morning’s skiing in the Alps followed by a dip in the Mediterranean sea in the afternoon - all just an hour from arriving at nearby Nice airport. And if that lifestyle still isn't enough, international jet-setter spotting during the film festival is the perfect way to while away a few relaxing hours.

Already own or looking to buy property in France? Take a look at our 'Owning a second home in France' Help Guide

Designed with Britons in mind, our comprehensive guide gives an overview of what you need to know if you own a second home in France. Includes rules, tips and answers to your questions on Brexit, inheritance laws, property taxes and more. Take a look and see what's inside. 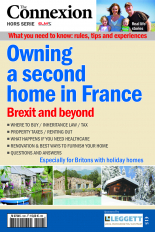 Owning a Second Home in France*
More from Property
More from Connexion
Get news, views and information from France
Join the newsletter
Subscribe to The Connexion