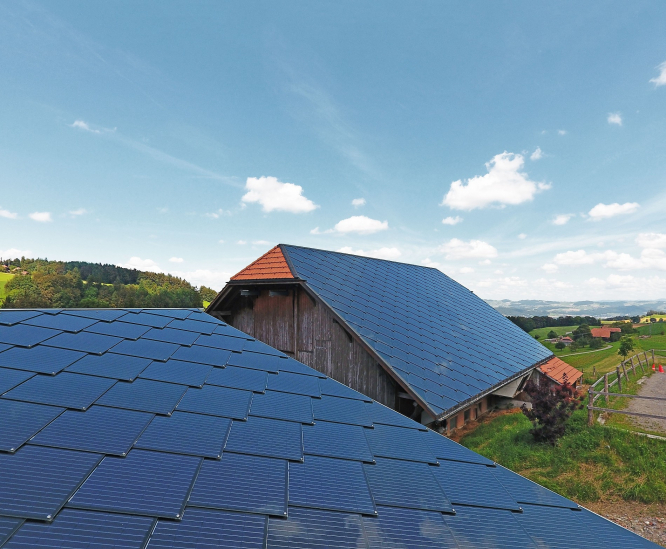 Photovoltaic roof ‘slates’ made by The Sunstyle factory
By Connexion journalist

Some Connexion readers who were early adopters of solar panels have guaranteed prices for 20 years of around €0.60 per kwh – compared with the €0.15 now available to householders selling all the electricity their panels produce.

Buying electricity costs around €0.17 per kwh.

If panels are installed as part of an auto consumption contract, where only electricity not used by the householder is sold, the sale price is €0.10 per kwh.

Ms Pompili told senators the high prices in the contracts meant installation costs of the photovoltaic power stations had been paid and “taxpayers cannot be expected to just continue paying an exaggerated price”.

“All the contracts involving installations of less than 250kwc (the measure used in the contracts) are not affected by this,” he said.

“That includes farmers and householders who typically have contracts of less than 9kwc.

“Your readers can be assured that the contracts they have will remain as they are under these proposals.”

As a sign of its support for photovoltaic electricity, the government said it will extend aid for roof mounted photovoltaic panels by raising limits for government help from installations of 100 kw to 500 kw, with savings from renegotiating the contracts going towards funding the extra help.

They were invented by André Posnansky, who founded Sunstyle after complaints from chalet-owners in Switzerland that panels were spoiling the look of their properties.

Terracotta-coloured ones have been approved by the Architectes des Bâtiments de France for use on or near historic buildings in the south of France and the grey ones approved for areas where slate roofs predominate.

In most cases, the production of electricity pays for the roof in 10–15 years, the firm claims. Sunstyle said the new factory will build tiles both for France and export and will create around 500 direct and indirect jobs.

The new factory is in Châtellerault in Vienne, Nouvelle-Aquitaine.

It is the first time that Sunstyle has opened a factory outside Switzerland, and the company said it was designed to build tiles capable of producing 1GW of electricity by 2025.

Environmental news in France for January 2021