Students build their own flats to beat sky-high rents 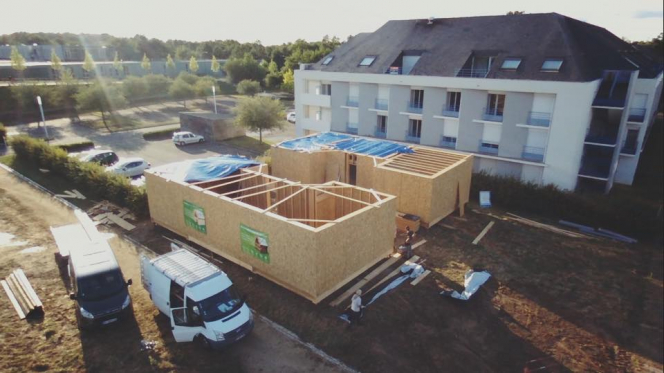 The high price of student accommodation has prompted a group of students in Brittany to design and build their own home on the Ecole des Métiers de l’Environnement campus in Bruz, near Rennes.

With a wooden frame and environmentally-friendly design, it surpasses conventional building and even low-energy ‘passive house’ standards and the four separate flats plus communal areas will house four.

Three of the seven students involved – Martin Ruau, 24, Pierre Lumalé, 19 and Lucas Vigouroux, 20 – will live there for the remaining years of their courses while the other flatmate is still to be found.

Using some of the environmental savvy from their course, such as siting windows to heat the building through solar power, they predict the thermic design will cut both energy expenditure and carbon footprint by up to 10 times compared to standard designs, and up to three times compared to a passive house.

The project began when the group realised that for the price of their average €400 monthly rent over their five-year studies, they could build their own high-standard, environmentally-friendly accommodation.

Martin said: “We all have convictions about sustainable development as a way of life, and we want to prove that students can build their own ecological house, with the same budget.”

To finance the project, they took a €20,000 loan, and launched a fundraising campaign (which has raised €1,200). Private companies impressed by their idea stepped in to offer free equipment and they also had help from their parents, most of whom work in construction.

Martin said they had also had great support from their school.

The prototype is modular so the parts are built elsewhere then assembled on site.

It also means the building can be hoisted on to a flat-bed truck and moved elsewhere. This inspired the name of their association, Hélicity – the ‘heli’ part of the name comes from a snail that carries its house on its back.

Their own experiences on the social side of flat-sharing helped them shape the design – this resulted in two shared kitchens and a patio area shared by all four.

“We thought about the good points and bad points, and felt one kitchen for two would be good, and with two bathrooms we’d have private space,” said Martin.

“We started planning the project in 2015 during our first year in the school. We did some sketches and 3D designs.

“The building work started in August this year. We received the timber on August 3 and started to cut all the wood, to build the walls and the floors, and then we transported it to the site on August 26 and began to put it together.”

The team worked through August and September, in soaring heat and torrential downpours, and enlisted friends to help.

“We didn’t have a lot of time, as we began school again on September 15, and since then we’ve been working every day for three hours during lunch and then after classes very evening, from 18.00 to 21.00. The days are long, but that’s OK – we are young!” said Martin.

While still building, they had to rent accommodation. “We took rooms in a student hotel for two months – it’s expensive but just for two months it’s OK.”

Martin said they were aiming to be able to move in on November 1, “but it might be a little bit later as we have a lot of work”.

The plan for Hélicity is onward – they hope to expand into a proper company – and literally upward.

“Next year we are going to build the enterprise. We want to develop and to offer to build for other students.

“Also, we don’t want to limit ourselves to buildings, there are a lot of problems on the campus, we want to look at other things like energy, food, transport – we want to move on and develop ourselves.

“At the end of our studies, we’ll have our own house to sell or to rent.

“We are also planning to work on a building with three floors because single-storey buildings take up a lot of place – we want to move on up into the sky!”