Cookie Consent by FreePrivacyPolicy.com Garden city of Stains near Paris is town-planning before its time French News and Views in English | The Connexion
8 may 2021
Classifieds Currency exchange Newsletter
Login Register BASKET
Facebook Twitter 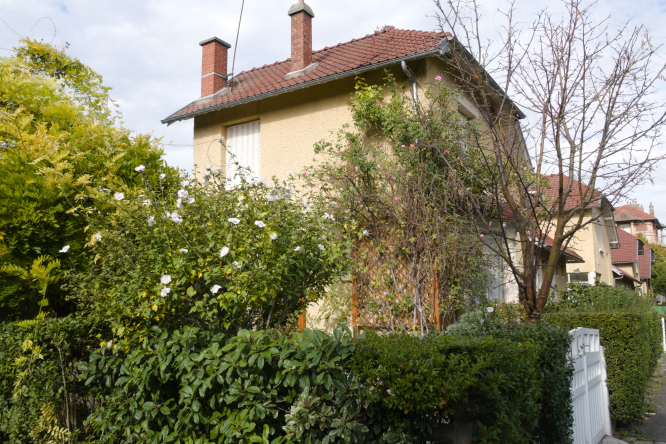 No two properties in Stains garden city are similar, yet all are in harmony
By Mike Diliën

A winter sun illuminates the ochre-yellow facades of cosy detached and semi-detached houses.

Hedges separate front gardens from narrow roads. It is less than 10 minutes to the Louvre on the Metro.

A leafy Paris suburb accessible only to the well-off? Not quite: the entire estate is council housing.

This year, the Seine-Saint-Denis garden city of Stains – pronounced with the same consonant sound as “van” in English and a silent final “s” – marks its centenary. The 28-hectare estate arose beside the old village of Stains from 1921 to 1933.

A variety of colours, styles and designs avoids the dullness that is typical of council housing

Even in a row of terrace houses, no two are similar, yet all are in harmony.

The garden city movement, conceived by British urban planner Ebenezer Howard in 1898 and pioneered in Hertfordshire with the creation of Letchworth Garden City in 1903, aimed to combine “all the advantages of the most energetic and active town life” with “all the beauty and delight of the country”.

The concept was soon copied all over the world. In France, the Seine- Saint-Denis department created no fewer than 22 garden cities to house its numerous factory workers.

Stains garden city is a true gem. At the time, it was the council housing office’s most ambitious project.

The estate has not been disrupted by later development – Stains was the first of the garden cities to be classified as a picturesque site, and later as a site of exceptional value.

Architects Eugène Gonnot and Georges Albenque planned their garden city meticulously. The street layout is a cobweb: from central Marcel Pointet square, broad avenues transition into serene squares, small roads and curving alleys. Everywhere, from the lines of plane trees on the avenues to a solitary oak in an alley, greenery is part of the overall plan.

Combining layout, architecture and vegetation, Gonnot and Albenque created different vistas. Plane trees and apartment buildings on avenue François-Bégué give the city an urban look, the semi-detached houses and leafy central reservation of avenue Paty give it a provincial air, while detached houses in the closes are reminiscent of a prosperous village.

The initiators of the garden city worked hard to promote their concept. There are 13 different types of house. In particular, the apartment buildings have been adorned with an eye for detail. They were also innovative: all homes had running water and the larger ones had a shower.

On top of accommodating factory workers, the concept also had a utopian intention: educating them.

In 1919, Henri Sellier, director of the council housing office, wanted to “offer lodging to the thousands of families which, in stinking shacks in our quarters and suburbs, catch the germs of all social, physical and moral diseases”. With 12,000 Parisians dying of tuberculosis every year, the garden cities would offer public baths and washrooms and classes in hygiene.

Because the council housing office never privatised its garden city, the estate has preserved its working-class roots. Since the 70s, academics have interviewed residents to collect testimonies of life there.

These testimonies reveal that times were quite different. Families were large and children worked from a young age.

'We warmed our pillows on the kitchen stove'

Mme Dussaux, who was born in the garden city in 1948, said: “Large families were moved to the Leclerc quarter, so-called four rooms. There were seven of us when my mother was assigned the home… Four rooms, but no heating … We warmed our pillows on the kitchen stove.”

Historian and long-term resident Pierre-André Loiseaux said: “The garden city, an idea of the conceivers from the previous century, allowed the poorest, the most deprived, to enjoy country pleasures which were until then reserved for the privileged.”

At the time, there was a strict code of conduct. The garden city employed 14 watchmen. Tenants were not allowed to hang laundry out of windows and no bar was allowed.

Today the rules the tenants have to follow are more relaxed. Even when most gardens are lush and manicured, more than one house has a garden that looks barren and neglected.

Garden cities that have been privatised usually undergo radical alterations. Mostly, the alterations consist of extensions: houses built in an era in which families were large are deemed too small today.

Living standards have risen noticeably. Many detached houses now have CCTV. Every street is lined with cars. Some tenants have two cars and many sacrifice greenery for parking.

In the 70s, after the failure of the high-rises that Paris suburbs had become associated with, garden cities and their quality of life drew attention from architects and urbanists.

Today, in times of sustainable development, integrating nature in the city and social inclusion, architects and planners again look to the garden city concept for its communal gardens and incorporated infrastructure.

Last year, an exhaustive renovation project spanning almost two decades ended. The works had to be planned so that tenants could keep living in their homes during the works.

It was hard to find craftsmen who could restore the ochre-yellow roughcast facades. Nonetheless, the team has done a sterling job.

The renovation, combined with the testimonial project, earned Stains the 2015 EU Prize for Cultural Heritage for awareness-raising.

'All of a sudden, I realised: people visit the place where I live'

Ile-de-France’s garden cities association, which aims to preserve and promote the region’s 83 garden cities, keeps an office in Stains. The “Mémoires de cité-jardin” office has a permanent exhibition and a library.

The region’s garden cities are becoming – as Letchworth in England once was – a tourist attraction, to the surprise of the residents: “At the tourism office, I noticed an ad for visiting the garden city of Stains.

“All of a sudden, I realised: people visit the place where I live.”