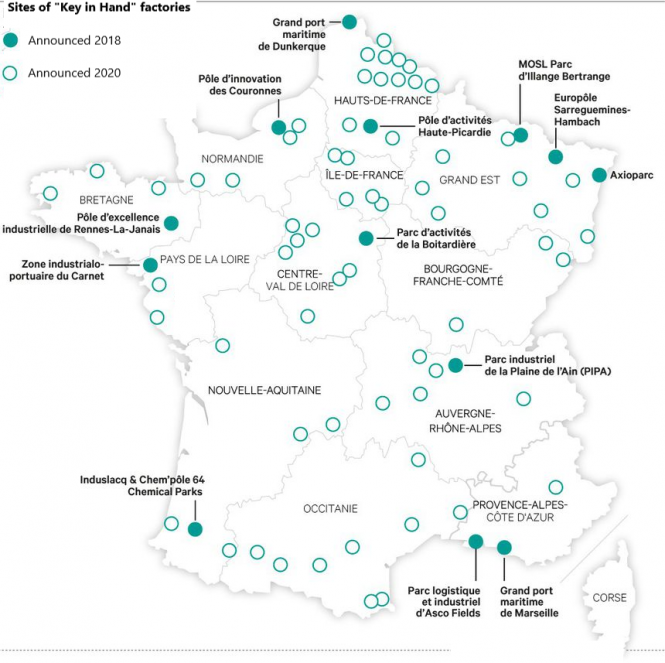 Under the scheme, a streamlined planning permission decision is guaranteed in three months and environmental authorisations within nine months, allowing building work to be fast-tracked.

There will be no need for investors to pay for expensive archaeological digs or biology surveys, currently required for all large new projects, as the government will have already paid to have these done on the sites. A first list of 12 sites was unveiled at a conference held in Versailles earlier this year. It provoked immediate interest from foreign investors but nothing was signed due to delays caused by the Covid-19 lockdown.

Agnès Pannier-Runacher, the new minister in charge of industrial development in the finance ministry, has taken up the idea and expanded it. “The idea is that industrialists do not waste time with endless Théodule committees,” she told Les Echos newspaper. Committees which have little or no use are dubbed Théodule in France, after a famous speech by General de Gaulle.

He said it was important to work with the people, and not “the Gustav committee, the Théodule committee or the Hippolyte committee”. Another phrase often used to describe the same thing is usine à gaz, (gas factory), referring to something which is made more complicated than it needs to be.

The government is thought to be planning to release a comprehensive package to relaunch industry this month. It might even cut the 30% rate of tax, one of the highest in Europe. However, Ms Pannier-Runacher said it was important to react immediately and not wait for further developments.

“Industrialists are sometimes reluctant to open factories in France because they say the administrative delays are longer than elsewhere,” she said in a radio interview. She added that the three months for planning permission and nine months for environmental approval were much shorter than normal. Nouvelle-Aquitaine has six of the sites for “key in hand” factories. Guillaume Defillon, in charge of political and economic missions at the regional prefecture told Connexion they were mainly on existing industrial sites, meaning connections for water, electricity and the road network were already available.

Work to carry out archaeological digs and ecology surveys are well advanced. “It is something which will boost the attractiveness of the region, and I do not see there will be problems meeting the minister’s timescale, although obviously, the type of factory will have an impact on the environmental study, which looks at both the impact on nature and on the people living in the area,” he said. “French and international investors are interested in this region and additional help, like this, can tip them into committing to investment.”

Second homeowners in France: Can I get a heat pump grant?

Economic development in France has long been a political football, with various agencies changing staff and orientations according to changes in local and national politics. In an attempt to change this, the government concentrated powers for economic development in the hands of regional councils and Mr Defillon said this would remain the case. “In exceptional cases like this, where the government is committing itself to large sums of money in a national strategy, there will be a push from the government,” he said. “But the principle of having regions in control of economic development projects remains because they know the situation on the ground better than people sitting in Paris do.”

Before the coronavirus crisis, inward investment to France had picked up compared to other European countries. Between 2017 and 2018 overall foreign investments in Europe fell by 4% but rose by 1% in France, with 1,027 recorded projects, the annual attractiveness survey published by EY consultants showed. This put France in second place, just behind the UK.

In a sub-section devoted to innovative investment projects, France was first with 144 projects. It was also top of the table for industrial investments, with 339 projects.