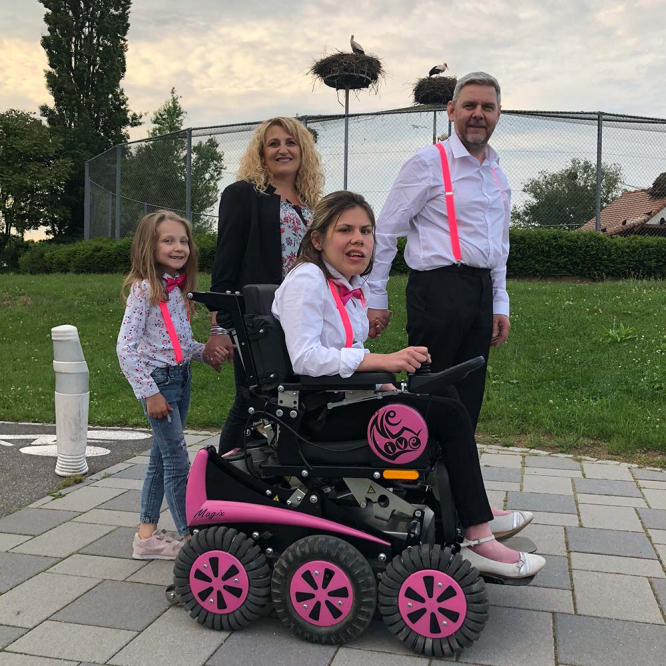 A six-wheeled powered wheelchair designed by a French carpenter for his disabled daughter has proved so successful that it has gone into full production.

The inspiration for the wheelchair came from a frustrating family ski holiday when Michel Ohruh found his daughter Mégane’s wheelchairs completely blocked by snow. Neither push wheelchairs nor electric ones could cope.

Mr Ohruh, who has a business specialising in designing and installing wooden and metal staircases, decided he must be able to design a wheelchair which is more mobile, and he immediately decided on six wheels.

The first models were used exclusively by Mégane but the response of others led him to think it would be good to start a wheelchair business.

He entered the annual Concours Lépine in Paris, which allows inventors to exhibit their products, and won the first prize in 2010.

Banks were not interested in lending “to a carpenter who wants to make electric wheelchairs” so it was family help and partnerships with groups such as l’Association des Paralysés de France that led to the first commercial models, called Magix, being built and sold in 2013.

This led to Mr Ohruh setting up a company, New Live, and moving to a new factory in Betschdorf in the Bas-Rhin department.

The family business has a dozen employees, 80% of whom are registered disabled. Mégane, 24, helps on the assembly floor.

Each wheelchair is made to order and is personalised with colours and finishes to the user’s wishes. They have two motors, one on each side, and a drive system which allows the power to go to the wheels which have the most contact. Mr Ohruh told Connexion: “The wheelchairs allow users to go almost everywhere and cope with most kerbs and other obstacles which you find on streets. And they can cope with snow and difficult conditions better than most others.”

Another feature of the chairs is the ability to raise the seat, to allow users to reach cupboards.

Most of the sales have been in France and the company sells through local agents, usually medical equipment suppliers.

For most French users, the cost of the chairs is covered by the health service and complementary pensions. A few have been sold, mainly by word of mouth, to people in Belgium, Germany and the UK, but the firm is gearing up for its first big export market, the United States. It hopes to start selling there next year.

“Early trials at trade shows over there had a very positive response, and we have big hopes,” said Mr Ohruh. “There is room in the factory to expand and we hope to get significantly bigger.”