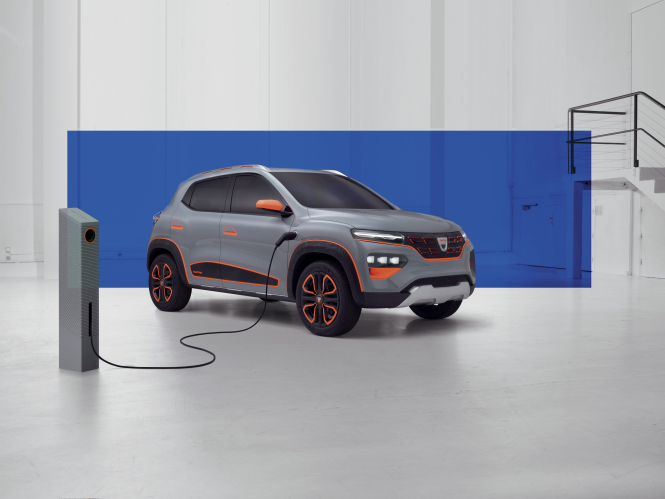 An electric car designed for city driving is being launched in France next year and is expected to cost as little as €15,000.

The Spring will have a range of 200km and is being built by Romanian carmaker Dacia, which is owned by French motoring giant Renault.

The four-seater car, based on a small car platform similar to a Twingo, has an SUV-style body.

No details of price or an exact launch date have been given, nor whether it will have batteries included in the price or have them rented – the model favoured by Renault.

However, leaks to French media, not confirmed by Dacia, said it was aiming at a price of €15,000, once government bonuses for buying electric are taken off. That compares to €32,000 for the cheapest Zoe.

Renault has launched a publicity campaign to highlight its own electric ambitions. At the centre of it is a hybrid petrol and electric engine, called E-Tech, which will be fitted to versions of its Clio, Captur and Mégane estate.

Renault claims the plug-in hybrids will be able to travel about 50km on electricity alone.

The company is also launching a new all-electric car, the Twingo ZE, based on the existing Twingo, which has a petrol engine. It will have a range of 180km in normal use and 250km in city driving.

A special edition of the purpose-built electric car, the Zoe Riviera, will have distinctive paintwork, a large screen for the cabin, and extras such as parking assistance and a reversing camera – as well as the option of a safety radar feature to detect pedestrians in the road and apply the brakes.

Renault has not given any information on prices or launch dates for the new cars.
Problems in finding recharging points in France are often cited as a brake on electric cars.

In February, 189 of the 217 recharging points in the Izivia network, based at motorway filling stations, were closed due to overheating.

The affected chargers were made by Bordeaux-based EVTronic, which blamed Izivia for not carrying out routine maintenance work.

The Ionity network says it intends to expand into France and, by March, had 200 fast chargers, though these cannot be used by Japanese vehicles.
Tesla has its own exclusive fast charging network.

Reconditioned Autolib “BlueCars” from a Paris car-sharing scheme that ended in 2018 are being sold for less than €5,000.

Autopuzz convinced Bolloré not to scrap thous-ands of the electric cars when the scheme collapsed, and bought 1,500 of them in a job lot.

The cars got their name because they were unpainted, having their aluminium bodywork covered with a thin varnish.

Pierrick Hamon, Autopuzz’s sales manager responsible for BlueCars, said: “For a basic asking price of €4,990, you get a car we have revised mechanically, with clean technical controls and which has had its interior deep-cleaned twice.”

However, the bodywork will be in the state it was when it left Paris, complete with dents and scratches.

For more money, the company, based near Lorient in Brittany, is happy to do a bodywork restoration and paint the cars.