Explore France in a campervan or motorhome this summer 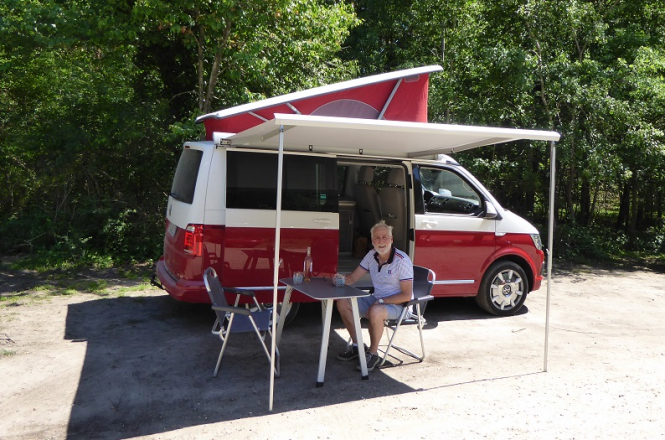 A glass of rosé at the end of a day’s driving and a chance to relax under the awning. The first VW Combi vans hit the streets 70 years ago next year. This California Ocean is ideal for a couple to head off for a fortnight
By Ken Seaton

Anyone driving along France’s roads this summer will not miss the flow of camper-vans and motorhomes from all over Europe, as countries emerge from their respective coronavirus lockdowns.

Hundreds of thousands of couples and families grab a chance for a get-away-from-it-all holiday in the world’s No 1 destination - with fabulous beaches, river and mountain scenery allied to history and gastronomy.

France also has an autoroute network that makes fast travel easy without stress.

As a bonus, parking is available anywhere a car can park, with 'overnighting' possible anywhere - unless specifically banned or on a public road.

Campervans are one of the fastest-rising holiday phenomena, with the number of vanistes doubling from 10 years ago to 504,881 vans on the road today.

But that liberty can come at a price. Buy new and you are looking at tens of thousands of euros – although resale values are good – with significant running costs as these are heavy vehicles with a thirst. Some larger motorhomes are also charged péage tolls the same as much larger lorries.

Read more: Motor home rental in France a hit for this summer

For years, larger motorhomes have been the No 1 market – Europe’s motorway network made it easy – and Citroën’s camping-car manager Pascal Bélot said the typical buyer was “55 years old, spending €55,000”.

Today, however, smaller vans similar to the classic 50-year-old VW Camper (while still not cheap) are a rising trend, being used as main cars and as “nomad” vehicles to head off for a night, weekend or fortnight.

Costs vary enormously depending on facilities – simple vans such as the VW California have no toilet – and also on age. Called camping-cars in France, the market is split into fourgons (vans) with a large car-sized van chassis and simple accommodation, going up to the larger motorhomes - which can be as sumptuous as your budget allows.

Vans take up the same space on the road as a car and are as easy to drive but motorhomes are longer, wider and much less easy to use on rural roads or town streets.

What kind of licence do you need to drive a motorhome in France?

Most campervans and motorhomes can be driven on an ordinary UK (or French) licence which includes B and B1 categories, meaning driving vehicles up to 3,500kg with a trailer of up to 750kg, while for larger units you may need to pass an additional test to gain the C1 category for up to 7,500kg.

UK licence-holders who passed their test before 1997 include C1 but, as with other British licences, it expires at age 70. French residents should swap it for a French one before then and will be required to take a medical test to keep the C1 category.

What should I look for in a motorhome?

That depends on what life you want to lead on holiday.

If you want all the mod cons, opt for a motorhome, but there is a range of sizes and a smaller one can give both comfort and ease of use.

Smaller vans are mostly for getaways, with a side awning giving extra living space. They have a key advantage, being able to get into most car parks with a 2m barrier. Many have no toilet, or rudimentary facilities, which limits isolated camping and makes campsite stops vital.

As for prices, the luxury life can be something like the German Morelo Empire Liner, a €440,000, 12m-long behemoth that can carry a Porsche in the “garage” storage at the rear.

The size of a bus, it sleeps five in full comfort. It weighs in at 15 tonnes, meaning you need an HGV licence.

Lower on the scale, VW launched a “cheaper” version of its sought-after California, with the Origins costing just under €50,000 – but rivals are much cheaper, with renovated vans, called fourgons amenagés, hugely in demand and starting about €35,000.

Vans with pop-up roofs are popular, especially with children, as the pop-up bed allows clambering over seats to get up and, with large screen windows, a den with great views.

The best way to find if it is for you is to rent – expect to pay €750-€1,100 a week including insurance - for a two-berth motorhome from big hire firms.

Their vehicles are usually relatively recent but private rentals from the likes of Yescapa or Wiki­campers offer older vehicles that have seen more use at prices 30% cheaper.

Where can you park a motorhome in France?

After that, choose any one of France's 8,000 campsites with 900,000 pitches, and many roadside aires. Plus, to get back to nature, there are 100 naturist sites.

Although France has thousands of roadside aires, some long-term vanistes have complained that finding decent parking is a problem, although some communes help by offering serviced parking areas. Groups such as the French FFCC, costing €34 a year, or the Dutch ACSI at €20, offer vast lists of campsites and give reductions of about 60%.

Slightly different is France Passion which details 2,000 free stops in 1,000 farms and 800 vineyards.

It is likely that the impacts of Brexit will have to be considered, although nothing will change before the end of the transition period.

After that, in all but the softest Brexit scenarios, visitors from the UK will only be able to spend a maximum 90 days in any 180 in the Schengen area (France, Spain, Italy...).

If you are French resident – after Brexit you will need to obtain a carte de séjour – you will also be able to travel in other Schengen countries within the 90-day limit.

UK passports will need to have at least six months left to run on them to allow entry to the Schengen area.

Drivers from the UK will need an international driving permit to travel in most EU countries. It is not possible to obtain one if you live in France and have a UK licence, so you should consider swapping for a French licence.

This is a light van where the original internal fittings have been stripped out and replaced with fixed units that give maximum functionality in the minimum of space.

Often the roof will be cut so that it can be replaced by a pop-up roof that gives an extra sleeping area.

The cult VW Combi started the market but Pössl is the leader in conversions.

The name comes from the jutting brow that gives space for a sleeping area above the cab and makes it ideal for families.

The space is also used as a store while driving.

Coachbuilt and based on a larger van, this Challenger is extended at the rear and gives standing room throughout.

This allows more comfort than a van and the driver’s cabin is generally separate.

This is the highest-selling sector of the market, with fittings built on to a standard or extended chassis.

The name comes from the sleek aero-dynamic shape of the front and the walk-through internal arrangement can give room enough to sleep four comfortably with its width giving full- length beds.

This Chausson has a drop-down bed in the lounge roof and fixed beds at the rear.

For many, these are the height of luxury, with a completely rebuilt unit on a naked chassis giving full scope for any type of layout and combination of features.

Another Chausson, it has a dedicated bedroom at the rear, a lounge that sleeps different numbers and a separate shower.

It is a complete walk-through space but its size means that it demands thought and care when driving.

Similar to the Intégral, these are the real height of luxury, with the example shown from Pilote being one of the smaller available (it can still be driven on an ordinary licence).

They can go up to the size of coaches like the Morelo Empire Liner.

Internal fittings are at the whim of the buyer and this 7.2m model has a central bed with a face-to-face lounge.

Go easy on the heavy stuff or else

Weight is the van owner’s enemy as most have a maximum authorised mass (MAM in the UK or PTAC in French) of 3.5tonnes. Carry heavy loads or fill up the tank with water and – at 1kg for every litre – you could fall foul of the gendarmes at a weigh-in.

Daily spending is typically €15.50 per person.

Choose your destination and your company wisely

What does the typical vaniste in France look like? Likely to be retired, the average age is 59, 72% are couples and 90% own their own vehicle. Average trips last just over 25 days, with most stops in a roadside aire, usually for three nights.

An older version of this article appeared in The Connexion September 2019 print edition.