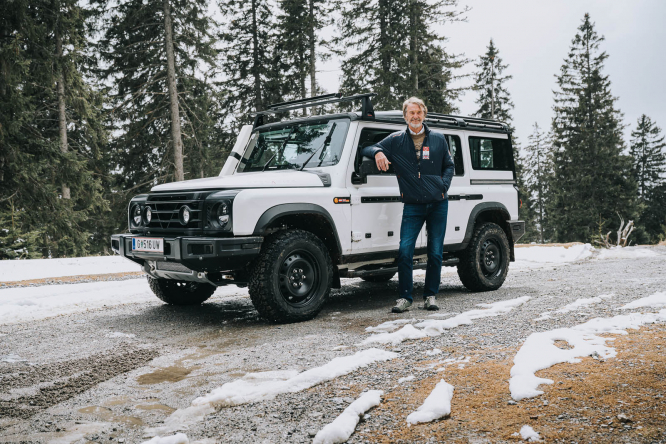 Sir Jim Ratcliffe, the billionaire founder of Ineos chemical company, set up a new unit called Ineos Automotive to build a 4x4 he is calling the Grenadier, from scratch, to keep the spirit of the old Land Rover alive Pic: Courtesy of Sir Jim Ratcliffe

The Grenadier is the 4x4 designed to replace the historic Land Rover design, which its owners stopped building, after 68 years, in 2016.

Land Rover replaced it with a 4x4 called the Defender, which has a price range of €54,000 to €129,000 and uses electronics for many of the functions performed mechanically on the old Land Rover.

It is much more comfortable than the old Land Rover but many feel the basic utility ability of the vehicle has been lost.

Sir Jim Ratcliffe, the billionaire founder of Ineos chemical company, set up a new unit called Ineos Automotive to build a 4x4 he is calling the Grenadier, from scratch, to keep the spirit of the old Land Rover alive.

His fortune is estimated at £17.5billion, making him the UK’s richest man.

An outspoken supporter of Brexit, Sir Jim moved to Monaco last year, saving himself an estimated €4billion in tax payments. The Sunday Times estimated that he paid €110million in taxes in 2018, making him the third largest individual taxpayer in the UK.

Initial plans to build the Grenadier involved two factories being set up from scratch, one in Wales and another in Portugal.

Sites were being prepared for the factories and deals were being negotiated with local development agencies.

Then Daimler, which makes small Smart cars as well as Mercedes cars and vans, announced it wanted to sell its factory making Smart cars in Hambach in France’s Moselle department.

In less than a month, Ineos Automotive had bought the factory for an undisclosed sum, with Sir Jim reported as saying the opportunity to buy a working factory with skilled workers was too good to pass up.

In a statement, Ineos Automotive said: “The site’s location on the French-German border, only 200km from Stuttgart, gives excellent access to supply chains, automotive talent and target markets.” As part of the deal, the factory will continue to produce electric versions of the Smart car until 2024.

The Hambach factory is one of the most modern car factories in the world, being built from nothing and opened with much ceremony in 1997.

French president Jacques Chirac and German chancellor Helmut Kohl were both at the official opening ceremony, and an estimated two million Smart cars have been built there since. Ineos Automotive initially hoped to start selling Grenadiers by the end of this year but plans have been put back by Covid-related delays.

Almost all car makers have announced delays due to global shortages of electronic chips, steel, rubber and other materials.

Mayor of Hambach, Daniel Muller, said that the news that Ineos was advancing in its plans was “excellent.”

“When Mercedes said they were going to stop the Smart there was concern, but then when we heard Ineos was taking over, we were very relieved and happy. Ineos has a big chemical factory only about seven kms away so they are known and respected here.”

Mr Muller saw one of the prototypes of the Grenadier when an event was held at the factory for a visiting government minister. “It looked very good - ready for work,” he said.

He has also received regular briefings from top management at the factory. “Everything has gone well so far,” he said.

Ineos Automotive said it has just started a programme of testing 130 phase II prototypes, after a model was driven by Sir Jim himself on a testing ground carved into the Schöckl mountain in Austria.

“We have made great strides since the very early versions of the Grenadier I drove a year ago,” Sir Jim said in a statement in May. “Today was a real test for our prototypes and they came through it really well.

“There is still work to do but I am confident that the Grenadier will do the job we have developed it to do.” Some cold weather testing of the prototype has already taken place in northern Sweden.

Warm weather and desert testing is due to take place this summer, including in Death Valley in California, and in the Middle East. Much of the detailed design has been carried out in Austria by the Magna Steyr engineering consultancy.

Unions at the plant have been reserved about the changes, fearing job losses and doubting if there will still be a market for large 4x4s in a decade.

Ineos Automotive seems to have taken these concerns on, and said it had formed a partnership with South Korean firm Hyundai last November to “explore possibilities” in using hydrogen as a fuel.

Hyundai is one of the world’s largest makers of hydrogen fuel cells and the announcement led to speculation that a fuelcell version of the Grenadier might be worked on.

Fuel-cells use hydrogen fuel to produce electricity, with pure water as a by-product.

Ineos is best known in France for sponsoring a British professional cycling team, formerly sponsored by Sky, with Tour de France winners Bradley Wiggins and Chris Froome racing for it.

The team last year rebranded as Ineos Grenadiers after the car. Ineos employs 22,000 people in 34 businesses with core businesses of petrochemicals, speciality chemicals and oil products.