New cars will cross the Atlantic by sailing ships 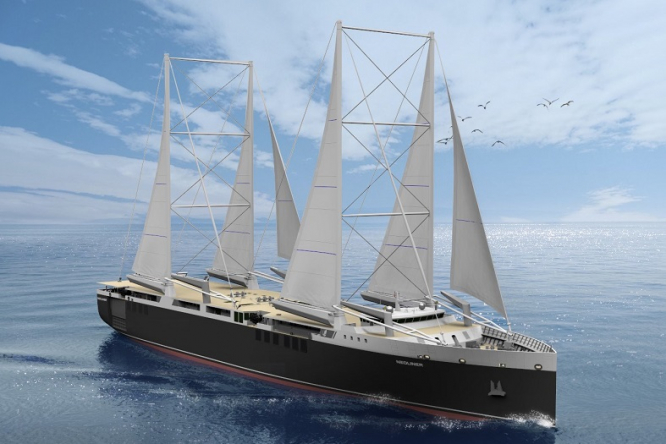 The ships will have sails on the side
By Connexion journalist

Tenders have been issued for the building of the first two 136m-long steel sailing ships, designed by the company Neoline. They are expected to cost €35million each.

Unlike sailing ships built at the end of the 19th century, the new ships’ masts and sails are set on the sides of the vessels. Automated furling systems and winches mean sailors will hardly ever have to climb to the topsails.

Adrien Prot, the firm’s sales director, told Connexion: “The ships are designed to have a crew of 15 and we have been overwhelmed with offers from merchant seamen who are passionate about sailing and want to be in the crew.

“Having this contract with Renault gives us a firm start for our transatlantic plans.”

At the moment, the hundred or so cars and vans which go to the overseas territory of Saint Pierre et Miquelon off Canada are first shipped into Halifax, Nova Scotia, and then, after being kept in a secure customs yard, sent on.

As well as having sails, the ships will have diesel-electric hybrid engines and captains will use on-board computers to calculate the most efficient sail and engine use to meet delivery targets. “Obviously, the idea is to use the sails as much as possible, but sometimes doing so will not be practical,” said Mr Prot.

The ships have been designed to take outsized cargo, which is often difficult and expensive for other ships to handle. The idea is that this work will give a necessary boost to general cargo, which will rely mainly on customers who want to reduce their carbon footprint.

“Objects like large turbines, aircraft parts and other bits of large, awkwardly-shaped machinery will fit easily into our ship,” said Mr Prot.

Renault said it was delighted to be the major launch company for the service.

The company said: “The determining factor for us was the environmental approach. Then our priorities are that the solution is viable and competitive, and this one is.”

After Renault, two more large French manufacturers – Groupe Beneteau, a boat and yacht builder, and Manitou Group, which makes rough-terrain handling machines – also signed to use Neoline. Both will send equipment to the port at Baltimore in the US.

For Beneteau, the 9.8m-high doors and 12.6m ramp width means that boats can be transported without having to be dismantled, a considerable advantage compared to other freighters.