French cyclist's jersey shows overtaking distance to drivers on back 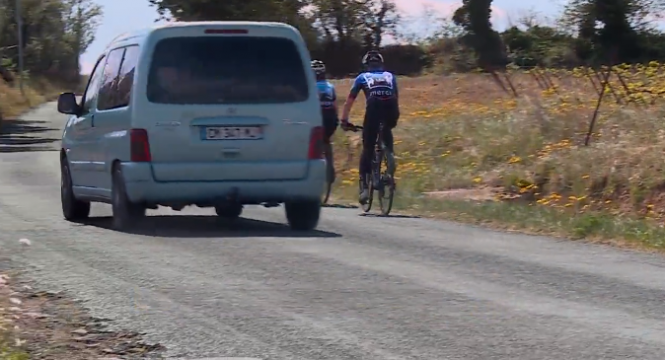 A cyclist has developed a jersey designed to encourage motorists to keep their distance as they overtake on French roads.

It's a simple message, simply told. Clearly printed on the back of the jersey developed by a cycling enthusiast in the Pyrénées-Orientales is a reminder of the passing distance in the French highway code.

Article R414-4 in the code states that the minimum distance for passing a cyclist is 1m in towns and 1.5m outside built-up areas - but it is a rule that motorists appear to forget.

In 2020, some 60,000 cyclists were treated by France's emergency services following incidents on the country's roads.

A few years ago, Lilian Cornelli was involved in a collision while out on his bike. It prompted him to develop the Sécuvélo jerseys, one for town riders, and one for those who head out into country roads. They are available online for €35 and €79.

And according to its creator, the shirt works: since he has taken to wear his "signaling jersey", Mr Cornelli has noticed a clear improvement in driver behaviour.

WHO recommends lifting of international Covid travel bans
23 January 2022
More from Transport
More from Connexion
Get news, views and information from France
Join the newsletter
Subscribe to The Connexion