Public can test out a robot taxi in Normandy 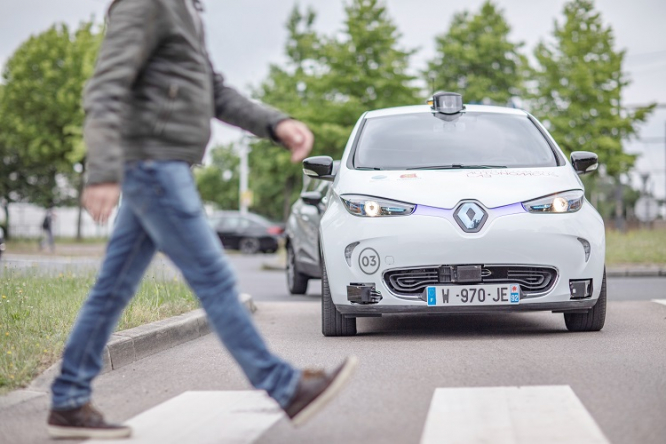 Using a smartphone app, users can hail one of the four blue, white and red all-electric Renault Zoes running routes in the Technopôle du Madrillet in Saint-Etienne-du-Rouvray to the Technopôle tram stop.

The service is due to start in  September “if necessary permissions are obtained” with taxis shuttling passengers to and from the tram to cover the ‘last kilometre’ to premises in a 10km zone with little public transport.

The robot cars will drive at normal road speeds and the first zone covered will be just 1.6km and extend to other circuits later.

Madrillet, like most business parks, is filled with pedestrian crossings, roundabouts, junctions, badly parked vehicles and building entrances but also has a shopping centre and residential area.

It will give the robot taxis a full test for what Renault and partner public transport operator Transdev see as a massive market.

With drivers no longer needed to control the vehicle, it opens up many other options for haulage and other businesses, councils, public transport or taxi companies and even individual drivers.

Renault told Connexion it had had “much contact with taxi companies through its regular taxi fleet sales” and was “confident they would adapt to and join in” on the new market, especially on short routes that gave little profit.

As a European leader in electric vehicles, it aims to be able to offer automated, on-demand mobility services by 2022.

It said of the Rouen test: “The pioneering project is unique in its comprehensive drive to build a ‘complete’ autonomous transportation system by testing innovative technologies able to create an all encompassing transportation system and provide an open-road service at speeds equivalent to those of conventional vehicles while ensuring passenger safety.”

Private testing has been done by Renault, Transdev and insurer Matmut at Madrillet since June 26 which have included tests on the Nestor smartphone app, the Zoe fleet control room, smart infrastructure and telecoms networks.

Each car is covered with sensors including Lidar and cameras and, for the moment, each also has a ‘safety driver’ ready to take control for legal and safety reasons.

Renault and Transdev hope that by the end of the tests they will no longer need the safety driver.

The driver does not touch the steering wheel unless required.

There is also a following ‘support’ car which runs just behind and the fleet operator can always take over control of the vehicle.

Passengers are asked not to talk to the safety driver, who must concentrate on the road as the sensors are sensitive and will stop the car on the open road if someone is detected, even on the verge.

Seating has been adapted for taxi use with the driver area sectioned off and the front ‘passenger’ seat facing the rear. There is an information screen just behind the driver’s seat.

Cars will be tested for about five hours a day and the full public test runs until Decem­ber 2019.

The Zoes will be joined by a minibus-like robot shuttle in 2019. Developed by Transdev and Alsace transport vehicle maker Lohr, this  i-Cristal shuttle will offer walk-in access for up to 16 passengers and a low floor for disabled access.

Renault has also designed an EZ-GO concept robot taxi that has no driver and offers walk-on access.