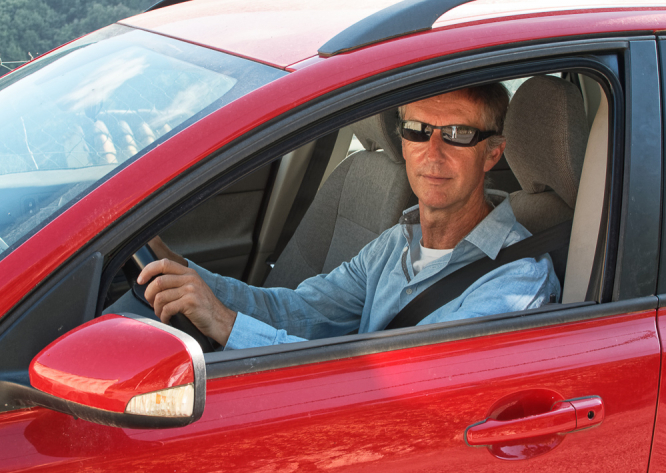 British writer Edward Sheen has been living and driving in France since 2000 and never expected to have to take a French test – however that changed as he faced delays with having his UK licence exchanged.

He told The Connexion he decided to “take control” of the situation by applying to take the French test.

It comes as new rules on using a UK licence in France come into force today meaning that many of those driving on UK licences will no longer have to exchange their licence this year to continue driving legally in France.

When Mr Sheen moved to Saint-Jeannet, Alpes-Maritimes, from the UK, he already had 20 years of driving experience and had continued driving on his UK licence under EU rules.

However he applied to change it for a French licence as Brexit approached, bringing the end of the automatic mutual recognition of valid UK licences.

However, applying in 2019, he was then one of many caught up in the problem of application backlogs in France.

His application was returned to him unprocessed in 2020, with the instruction that he should reapply online via the online process at ants.gouv.fr

He did so, but as the waiting continued, he cancelled the application and opted for the French test instead. “You might as well wait for some cows from La Loire-Atlantique to wander home as they are not processing anything until the politicians agree something,” he said.  “This would at least give me some control over the situation.”

The Connexion recently learned that although swap applications in 2020 should be honoured due to the Brexit transition period, officials had been waiting to agree ‘special measures’ for these applications.

It has now been announced that in this case French licences will be issued where the UK licence has six months or less to run on it, but otherwise the holders will be told to continue driving on their UK licence instead.

When he made his decision Mr Sheen was not aware of the level of knowledge that would be required for the test. Passing the theory test in France turned out to be more arduous than the process in the UK 40 years ago, when the test consisted of a few questions asked in the car at the end of the practical test.

He found that the French test, called examen du code de la route or ‘le code’,  involves a sit-down test in an examination centre, with 40 questions and a pass mark of five mistakes or fewer.

“After I obtained le code I could then apply to do the practical driving test itself through a driving school,” he reports being told*.

Mr Sheen signed up to Ornikar, an online driving school, and after paying €30, went through all the material they had.

“The first thing I realized was that I had driven here for 20 years without knowing the rules of the road. Also, it was immediately apparent that, judging by the way they drive, most other road users don’t know them either,” he said.

The subjects covered in le code are comprehensive and are grouped under themes such as ‘legal provisions regarding road traffic’ and ‘first aid’.

“After trying some test papers I realised there was absolutely no likelihood of me passing the exam,” Mr Sheen said. “Some serious study was needed and also an intimate knowledge of French driving vocabulary.”

He added: “It’s a bit like mastering a crossword too. You have to get inside the mind of the person who sets it. It’s not a case of what you think the answer is, but knowing what the answer is they want you to give.”

After several weeks of intense studying and a string of successful test papers under his belt, he felt confident enough to apply to sit the exam.

Applicants must obtain a number for a digitized photograph which Mr Sheen obtained from a local photo booth, as well as scans of identity and proof of address documents.

Once all the documents had been uploaded on the website of official agency ANTS (Agence nationale des titres sécurisés) Mr Sheen obtained his attestation d’inscription au permis de conduire with a NEPH number –  Numéro d’Enregistrement Préfectoral Harmonisé – enabling him to book his theory test for €30.

“So, I took my first exam for 33 years, not far from the station in Cagnes-sur-Mer on a Saturday morning. Some nervous participants were puffing cigarettes outside. They were younger than me and looked rather askance when I said I had driven for 40 years.

“One thing that bothered me was the machines. Would I be able to operate them? Of course, I was the one having difficulty getting my tablet to work – and the examiner joked about how nervous I was. Clearly, this étranger had no idea what he was doing.”

However when the results came through ten minutes after finishing, this étranger was triumphant.

“‘Une faute’, the examiner exclaimed. ‘Une faute.Bravo, monsieur. Une faute. C’est impressionant’ [one mistake, well done sir, it’s impressive]. Me, I was just relieved I wouldn’t have to do it again.”

Despite having driven for 40 years, Mr Sheen is now starting lessons all over again.

Beginners need a minimum of 20 hours of lessons, though Ornikar offered an initial one hour’s evaluation.

“I think my young instructor took a while to get over her puzzlement as to why I was there – she seemed impressed by the categories of vehicle I was allowed to drive – but politics are politics and so we took to the roads of St Laurent-du-Var.”

After his evaluation the instructor told him he would need just five lessons, as a matter of course. She also told him that there was a waiting list of at least four months for a test.

“What do I think of all this? After a few angry outbursts I’ve made my peace with it. An immersive experience with the French language has been of benefit as has actually learning the rules of the road. Plus most people could do with bad habits being ironed out. It just makes the roads safer for everyone. I also gained the respect of the French young people. Une faute, first time is, vraiment cool!”

*The Connexion notes however that there is another option known as candidat libre (free candidate) which does not involve going via a driving school for the practical test. Interior Ministry officials told us in this case those who have formerly driven on a non-EU licence can be dispensed from showing the otherwise obligatory practice with a school or with another driver and a dual-control car, if their right to drive remains valid in the country that issued the licence (usually until age 70 for a UK licence).