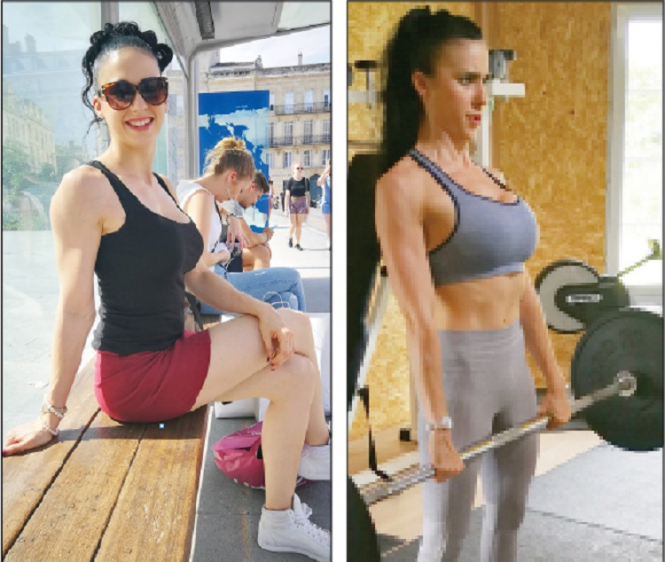 “I didn’t know any French,” she said. “So I felt completely out of my depth when I started school.”

Her parents Sharon and Peter, both 57, had decided to make the move after holidaying regularly in France. Both set up their own businesses once they arrived in 2005, with Sharon working as a hairdresser and Peter as an electrician.

But Anne found it difficult to settle. It took several years to master the language. “I loved the idea of living in France,” she said. “But I found settling in really hard.”

Despite her challenges, she obtained her BAC-L at lycée in 2012 before starting a university course in Poitiers with the ambition of becoming a translator.

Two years on, however, she had a change of heart. “I just couldn’t imagine myself working as a translator,” she said. “It didn’t really suit me.”

She enrolled on a BTS in tourism in 2014, and qualified two years later. But she still felt uncertain about her choice.

Anne had recently joined a gym. Seeing her trainer interact with other gym members made her realise where her ambitions were. “I decided I wanted to train as a coach,” she said. “But I found out the cost was €6,000.”

Although Anne’s parents were supportive, they told her she would have to raise the money herself. “They wanted to make sure that I was committed to my career. I had to work different jobs, including waitressing in fast-food restaurants and serving drinks in a sports club.”

It was this determination that helped Anne through the recruitment process for her chosen course. “There were 100 applicants for 20 places. We had to do a physical test, a writing test and the interview.”

After starting her course in 2014, an unfortunate experience on a physical exam set Anne on the path to her current success. “I had to perform at least five pull-ups,” she said, “but only managed to perform two correctly. I was given a chance to redo the test in February 2015; if I’d failed, I’d have had to repeat the year.”

A friend told Anne about trainer Jérôme Petit, who ran the local gym Le Ranch de Sanxay. “I hadn’t even known about the gym,” she said, “so when I found out that Jérôme had coached two world champion bodybuilders, I couldn’t believe my luck.” Anne began training with Jérôme, who put her on a high-protein diet with targeted workouts. “Gaining strength is 70% diet, 30% effort,” Anne said. “Jérôme told me to eat six high-protein meals a day and we worked out six days a week. When the test came around, I did nine pull-ups.”

After passing the exam, Anne found herself missing her training sessions. “I got in touch with Jérôme again. I knew that some of his clients did body-building and asked if he’d train me for competitions,” she said.

Bodybuilding competitions have a range of categories, and Jérôme and Anne decided to enter her into the Bikini Body category. “I have a natural athlete’s body, so it’s the one that suits me best,” she said.

“But I sometimes get a little jealous of the girls who build more muscle – they look beautiful.” Anne’s first competition – the Natural Fitness show in Paris – took place in October 2016, just eight months later.

“There were 40 competitors in my category, so when I came in the top 10, I was delighted,” she said. “I was nervous before I went on. But being on stage felt natural.”

She came second and third in her next two competitions – but then faced her first serious disappointment at the MuscleMania competition in Paris in October 2017. “I didn’t place,” she said. “I was so disheartened.”

Not wanting to finish the season on a low, Anne decided to enter another competition, the GP Heracles 2017 in Avignon, two weeks later. “This time I kept it really quiet,” she said. “And I couldn’t believe it when I came first!”

Anne also took home the trophy for overall competition winner. “It was such a high,” she said. “And I hope to continue my success this season.”

While training for the European Championship UFE in London in September, Anne was also working with Jérôme on a new product for shows. “We’ve been working with laboratories to create a tanning product for competitions called Centaure,” she said.

“It’s been a lot of fun, but hard work. It’s a really exciting time. We’re really happy about our new adventure.”