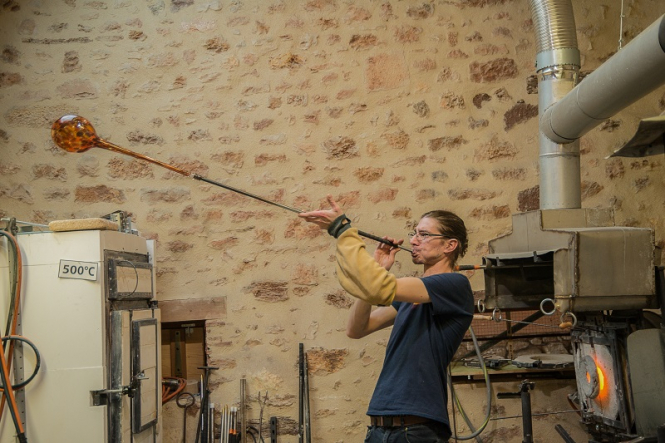 Artisan glass blower Thibault Lafleuriel creating another work of art in his workshop in Terrasson, Dordogne
By Jane Hanks

“I had always been interested in design and my bac was a bac pro arts appliqués,” he said. “But I was frustrated that what we drew and imagined never became anything concrete.

“So I planned to try out different materials by taking a series of CAPs (certificats d’aptitude professionnelle) in different subjects. The first one I did was glass-blowing and I needed to look no further.

“I was not particularly good at first. It takes an awfully long time to master the skills. They say it takes 10 years, though I managed a little quicker.

“One of the most complicated tasks is making a wine glass with stem and base. That can take up to five years to learn.

“After the CAP, I needed to learn more and so I studied for a BMA (brevet des métiers d’art).”

Today, Mr Lafleuriel has a workshop in Terrasson, Dordogne, which he spotted when the local mairie was looking for a glass-blower to attract tourists to the old town.

“In the summers I found jobs with glass-blowers and did several internships, which gave me a breadth of experience.

“This meant that, eventually, I was confident to set up on my own, and was lucky to find the workshop at Terrasson.

“It is a long way from my home town of Strasbourg, but it has worked out well for me.”

His signature product is a decorated glass ball with a long thin tube which can be filled with water and put into plant pots to provide an attractive controlled watering system.

He also makes Christmas baubles, animals, and water barometers to sell to tourists, as well as fine artistic pieces, often based on ocean life.

He mends clients’ favourite pieces of glassware, and gives half-hour lessons to anyone over seven years old.

Passers-by are enticed into his shop by the coloured glass and the spectacle of a man transforming a fiery blob into the shape of his choice.

However, he makes most of his money around Christmas, when he goes back home to sell glass decorations at a Christmas market in Alsace.

He says he loves glass because of its versatility: “There is a freedom to make anything you want, to be creative, and there is a rapidity in the result.

“You make something directly without having to add any finishing touches later.”

The first is the hottest, at around 1,300C, and contains molten glass.

The second is used to reheat a piece while working on it.

The third is at 500°C and is used to slowly cool the finished article, over a period of a few hours or days.

The initial step for the glass- blower is to collect a small amount of molten glass on a blowpipe from the first oven, which has a permanent supply.

It is then rolled on a thick flat sheet of steel called the marver, which cools the exterior of the molten glass and shapes it.

Colour can be added by rolling it in small pieces of coloured glass. More glass can be added to make bigger items.

Then it is time for the souffleur to blow into the pipe and create the desired shape.

Not many people take up the profession. Mr Lafleuriel said there are about 15 students on each CAP course.

He likes explaining his craft to the public and particularly children: “CAPs and crafts are not given a high status in schools and I like to make young people aware of the possibilities that exist.”

Much of his time is taken up producing articles to sell, but when he has the time, he likes to experiment and produce fine pieces. He has had several works in exhibitions.

Until the 1980s, glass-blowers were often employed in industry, making glassware for homes.

There are an estimated 300 glass-blowers in France. Some still work in laboratories or industry. As with a wide range of crafts, there is a CAP in glass-blowing, lasting two years, which you can do aged 16 after the Brevet, or in one year following a Baccalaureate.

They can all be followed by a two-year BMA souffleur de verre, including internships.

After that, you can do a three-year DN MADE (diplôme national des métiers d’art).