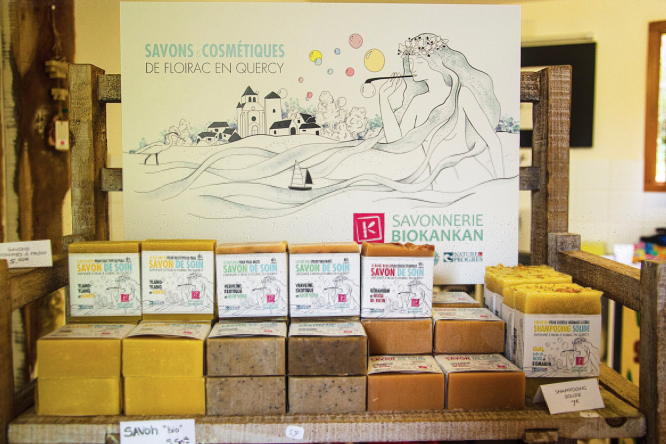 After four to six weeks of drying, the soaps are finally ready to be sold in local shops, at markets and through Anne Kandel’s website Pic: Jane Hanks

Anne Handel started her business in 2015 in Floirac, a picturesque village in the Lot, and is now sufficiently established to make a living from her craft.

Six years after launching, she says she still gets a thrill watching the magic of the chemical reactions at work when oils or fats are mixed with caustic soda to create her products – a process known as saponification.

Ms Kandel’s soaps are made entirely from organic ingredients and use environmentally friendly methods. This gives her accreditation from two associations backing natural cosmetics, Nature & Progrès and Slow Cosmétique.

The cold method, savon à froid, is favoured by artisanal soap makers. None of her ingredients is heated, as they often are in industrial soaps

“Heating the mixture speeds up the process, but when the mixture is left on its own, the same reaction will take place, it’s just that it happens over a longer period,” Ms Kandel says.

“It makes a better soap because the natural properties of the oils and fats are not altered, and a by-product of the saponification process, glycerine, is retained in the soap, which helps protect skin.

The ingredients are poured into a rectangular wooden frame lined with paper, which holds 7kg. It is left overnight, and by the following day it has solidified, but is still soft. The soap is then cut vertically into three lines, and horizontally to make several bars. These are left to dry out for four to six weeks before they are finally ready to be sold.

Ms Kandel uses shea butter, coconut and olive oil in her soaps. The former comes from fair trade producers in Upper Guinea and, she says, has remarkable moisturising properties, as well as hardening the soap. Coconut oil helps to produce lather.

After the saponification process, any fat or oils that have not been transformed into soap after contact with caustic soda are called surgras, which makes the final result more nourishing. Anne Kandel’s soaps have between 6%-8% surgras.

“That is higher than most industrial soaps, but any higher and the bar becomes too soft. It is all about getting the right balance,” she says.

She has created a range of recipes for different skin types, adding other oils, fats, essential oils and natural colours.

For dry skin, for example, her soap has hemp and castor oil, goat’s milk, red and white clay, and geranium, mint, cloves and blueberry essential oils.

Ms Kandel used to work as a computer graphics designer in Toulouse, but decided to move back to the country after the birth of her first child.

“I had always been interested in looking at product ingredients and realised most used in industrially produced soaps are not good news, and so I started making my own, although only for family use.”

A book, The Truth About Cosmetics by German journalist Rita Stiens, who was one of the first to highlight the use of potentially dangerous ingredients in cosmetics, persuaded Ms Kandel to learn more.

She did a short course with Leanne Chevallier, one of the pioneers of cold soap making in France.

“I loved it, but realised that producing enough to sell is very different from a few bars in the kitchen,” Ms Kandel says.

She started investigating formal training schemes but found there were none, although some private schools offered expensive courses.

“I decided the best way to learn was to work with an actual soap maker.

“I discovered Anne-Sophie Martin in Dordogne, who had founded a business, En Douce Heure. She was incredibly kind and helped me set up my company, Biokankan (biokankan. fr). I have since helped a young soap maker in the same way.”

One of the biggest challenges, says Ms Kandel, is conforming to the regulations.

“They are very strict and a huge dossier has to be filled out for each soap and verified by a qualified doctor or pharmacist with special training in this field. The labelling is highly regulated, using English or Latin names which often do not mean anything to the average consumer. I add a separate list in plain French.”

She said it was difficult at first to find the best way to sell her products. Now she goes to a few organic markets, is stocked in local shops, and finds internet selling – from her own website or specialist cosmetic sites – works well.

Ms Kandel is hopeful the market for her soaps will continue to grow as more and more people become aware of the benefits of artisanal cosmetic products, and she has an increasing number of informed clients who know what savon à froid is.

At €5.50 a bar, the soaps are more expensive, but she can justify this by the high quality of her ingredients and the fact that you are not paying for water, as you do in a supermarket shower gel.

“I get a great deal of pleasure from my job,” says Ms Kandel.

“Working with my hands has almost become an addiction, as they seem to have their own intellect, and I am continually improving my skills.

“It is very creative coming up with different recipes and playing with shapes, colours, scents, textures and designing labels. There are so many aspects to being an artisan. Even the admin can be interesting.

“Though it can be very hard work, with only a very small salary, it is very satisfying to create what I know is a healthy, natural and beautiful product.”

Banker to cheesemonger: ‘I want to be an ambassador of this heritage’