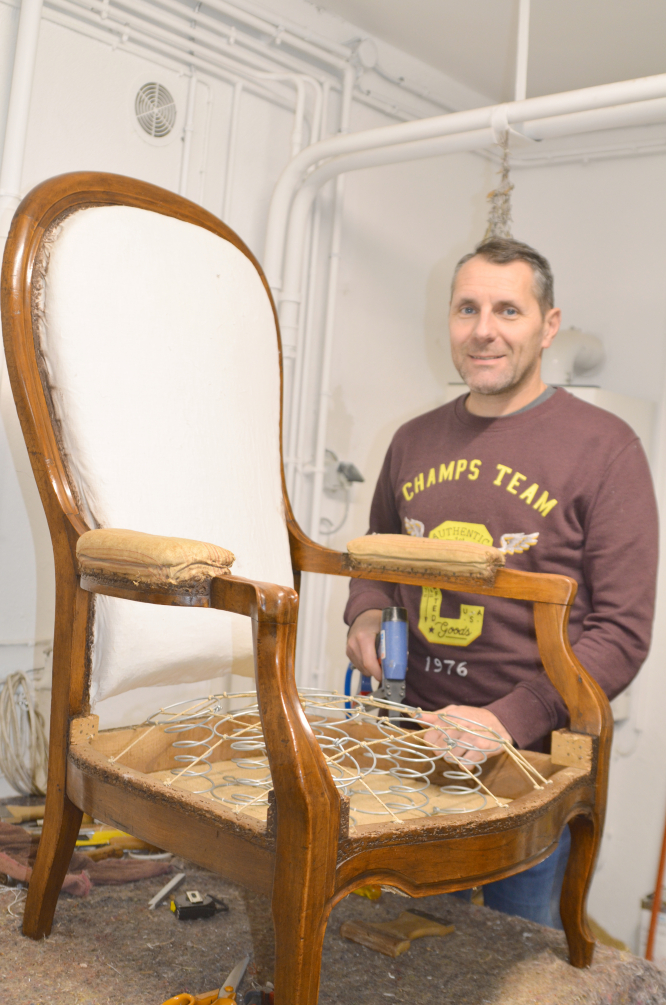 He runs his own business in Brive-la-Gaillarde, in the Corrèze, and is one of five upholsterers in a town of 45,000 people – proving there is work to be had.

He restores and creates chairs, armchairs and sofas. He likes working with antiques but also with contemporary furniture, and his shop is full of colour, from the bright and cheerful materials he favours.

“I became an upholsterer because it was my father’s job,” he said. “When I was young, I loved watching him work and knew I wanted to do that when I grew up.

“I learned everything from him. I only studied for one qualification, a CAP in sewing, because I wanted to create my own modern furniture, where you often have to sew, as well as tack material on to a frame.”

Many people have quality pieces of furniture in their homes that they want to restore rather than throw away.

A lot of his work comes from word of mouth and he says it is always a pleasure to hand over a chair he has worked on which now looks like new.

He said: “The client has to have confidence in you because he is handing over a part of his family history and when you have done a good job, it is satisfying because the client is happy with the result, because something precious to him or her can continue to be used for many more years.”

He says people worry about cost, but taking a chair to an upholsterer is around the same price as buying new from a quality furniture store.

So you pay the same and get, in effect, a new piece of furniture, but you have something more valuable because it already has its own history.

On average, a chair will take him two days to upholster. “You need a lot of patience and to work slowly and carefully. I would not say I am an artist but a craftsman who knows how to use his hands.

“You can go to college and learn how to do it, but really the only way is to get as much practical experience as you can. I love the work because it is so varied.

No two chairs are the same. I may upholster several Voltaire chairs in a year, but they are always slightly different in style and materials.”

The term tapissier décorateur, or tapissier d’ameublement, is not restricted to chairs and sofas but applies to curtains, cushions and wall-hangings.

Although most of the work is with furniture, the definition given by the Institut National des Métiers d’Art is “working with materials to create interior textile decorations”.

Nearly half of their work (40%) is restoration and the rest is working on new furniture. They work mostly for
private clients.

Most tapissier décorateurs (68%) work for themselves. If not, their businesses are small with up to three employees. It is a job which attracts women and men in equal proportions.

You need an artistic flair and a sense of colour, and you must be good with your hands. As it often involves restoration, you need to know about the history and the different styles of furniture – the difference between a Louis XV and a Voltaire chair, for example.

You need patience and dexterity and there is a great deal of technique to learn – using hammers, tacks, needles, various threads, scissors, different materials from leather to fine silks, and a sewing machine.

It is a manual job and uses very little machinery.

The upholsterer often has his own workshop, which can include a shop where he sells what he has made or restored direct to the public.

Often, he is called to someone’s home to look at a piece of family furniture which needs restoring to give a quotation.

If your first job is working for someone else, you will start on the smic, the minimum wage.

You do not need to have any formal training to set up as an upholsterer, but there are plenty of specific training courses.

Further studies are for a diplôme des métiers d’art, and the highest qualification is to become an Artisan Tapissier de France, which is awarded by a jury to someone who is highly qualified and shows he or she has produced work of a very high standard during his or her career.