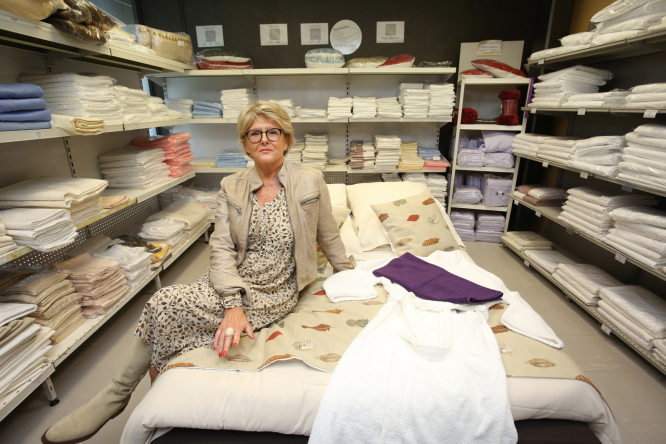 Ms Ciria launched Du Beau Linge in 2016. The firm buys used linen from hotels or industrial laundries, sorts it, cleans it and then transforms it, if necessary, to offer it a second life.

It was personal curiosity rather than a moneymaking opportunity that originally inspired the recycling scheme.

“I became aware, when I was in hotels, of the high quality of most of the linen provided,” said Ms Ciria, whose business is based at Saint- Yrieix-sur-Charente, near Angoulême.

“When I looked to see if I could buy some for my personal use, I discovered it wasn’t an option for individuals.

“I found that used linen was instead bundled up and sent abroad for destruction.

“It seemed such a waste that I thought there must be a business model to do it differently.”

Not all items can simply be washed and resold, especially when there are tears or stains.

Instead, damaged towels are cut up and made into bath gloves or flannels, for example, while sheets can be turned into pillowcases.

Some of the sewing work is done by a group helping women with disabilities find work, as well as trainees from a specialist lycée in Angoulême. Where linen is deemed beyond resale potential, it is washed, ironed and given to local charitable organisations, including animal shelters, which use it for bedding.

Only the most damaged items are thrown out.

The business receives 96 tonnes of linen each year, of which 30% is sold after cleaning, ironing and repackaging, 30% is transformed into new items, 20% is donated, and 20% is destroyed.

It took Ms Ciria some time to persuade hoteliers to take her seriously.

“They did not see the benefit of sorting things and sending the best to me instead of just using the usual rag merchants – until they realised sending it to me was a benefit under their social and environmental responsibility charters.”

She has opened two showrooms and a website to sell the linen, and is doing well, with plans to move into larger premises.

“People buy for themselves, but also lots of people with gîtes, chambres d’hôtes or Airbnb properties, that sort of thing, are interested in purchasing” she said.

“It is linen designed to be comfortable and made to last.”