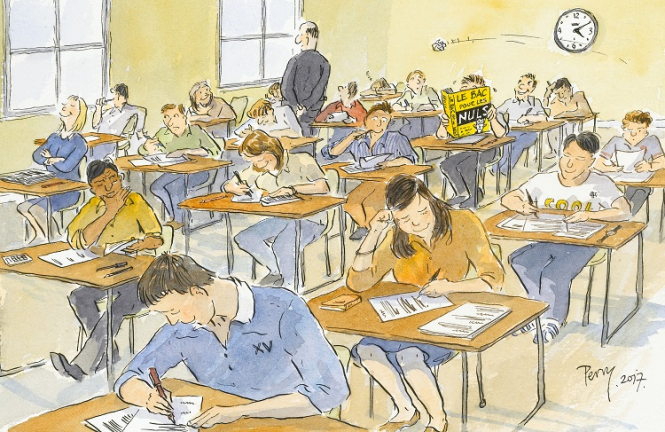 It may have been started under Napoleon but the name baccalauréat has much older roots.

In fact its origins are the same as for the English word ‘bachelor’ (used in the UK for first-level university degrees) and in the Middle Ages it referred to a trainee knight. A person who has passed le Bac is called un bachelier or une bachelière.

The Bac has a specific vocabulary to understand how it works (see end of the article).

Firstly, there are three main types (filières) for students to choose from: general, technological and professional (‘pro’).

Pupils need to plan ahead starting in troisième (generally age 14-15), discussing plans with teachers and parents as the choice of filière may affect the lycée they transfer to in seconde.

Studies for the vocational Bac pro start straight away in seconde while for those who will take a general or technological Bac, seconde is a year of broad-based studies, with a final choice of the type of Bac to be studied being made at the end of that year.

There are plans to reform the Bac in time for 2021’s exams.

This may include halving the final exams to just four, focussed on the candidate’s main interests studied in greater depth, plus the use of continuous assessment.

Roughly half of those taking the Bac do a general one which is aimed at going on to higher education and they all continue with core subjects such as French, PE and modern languages and all take philosophy in terminale. Since 1993 there has been a choice of three types or séries of the general Bac: littéraire (L), scientifique (S), économique et social (ES).

The Bac L focusses on languages and literature, history, geography and arts. Students may also choose a ‘speciality’ such as a third modern language, law or even maths, taken on top of the core elements. The latter include science in pre­mière but its ‘coefficient’ (weighting) is low, meaning marks obtained in it do not count strongly in the calculation of the Bac’s final mark.

Bac S focusses on scientific theory and practice, including experiments, while Bac ES centres on economics, sociology and current affairs as well as history, geography and maths.

Students may also take up to two ‘options’, which may boost the final mark or make up for a weak subject (all the ‘superbacheliers’ that we hear about in the press when the marks come out – obtaining more than 20 out of 20 overall – have done options. These often include Latin or Greek (which are awarded a particularly high weighting). Other ones available vary around the country and include such subjects as hunting (at a lycée in Aude), surfing (in Tahiti and Biarritz) or chess, plus minority regional languages such as Breton or Basque.

If a student’s favourite option is not taught in their lycée it is possible to register as a candidat/e libre and prepare on their own.

Vocab of the Bac

Série (series) – sub-types within a filière, such as Bac L for the general Bac, or STL (sciences et technologies de laboratoire) for the technological one

Some lycées offer the Option internationale du baccalauréat (OIB), a bilingual/bicultural Bac course studied partly in French and partly in another language. It should not be confused with the International Baccalauréat, which is not a French exam.

Certain schools also offer one of several ‘binational’ Bacs, such as a Franco-American one.

In addition to general academic studies, those doing a Bac technologique focus on a technical or applied science field, such as lab work, renewable energy or music and dance, with a view to higher vocational studies. There are eight ‘series’ to choose from and within some of these there is a choice of ‘specialities’. For example within the management series students may choose to focus in terminale on finance, marketing, HR or IT.

The Bac pro, aimed at going straight into work, combines general study (French, maths, languages...) with study and placements in one of  around 80 ‘specialities’ as diverse as forestry, cooking or dental prosthetics.

Pupils with eight overall may try to raise their mark by taking oraux de rattrappage. The candidate chooses two of their subjects and undergoes an oral questions session. If their mark is better than the one from the written exam it takes its place.

There are nine or 10 obligatory exams (some written and some oral, or both) plus the options.

The ‘speciality’ of the Bac pro is tested mainly by continuous assessment and its requirements (written exercises or practical tasks) vary; candidates also take formal exams in the common academic subjects.

Candidates with high marks obtain merit awards (known as mentions). These are assez bien (quite good) for 12/13, bien for 14/15 and très bien for 16 or more.