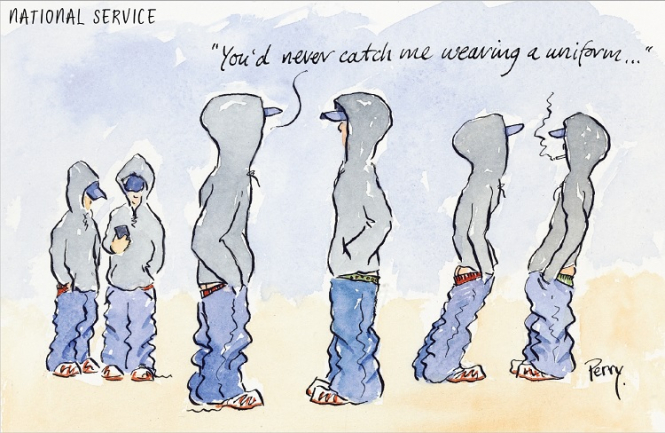 President Macron believes a Service national universel for young people will encourage them to take a part in the life of the nation and promote social cohesion.

He wants it to be in place by the end of the year after a public consultation.

If it happens, it will be a return to form for France, which had national service for two centuries. It mostly consisted of service in the armed forces, also commonly known as service sous les drapeaux (‘under the flags’).

What used to happen

There was compulsory military service for young French men from the Revolution until 1997. It varied over the years from one to five years and, in 1965, was termed service national, though service militaire was still being used in everyday language in the 1990s.

In its final form it was for 10 months, or 20 for conscientious objectors who could take the option of alternatives like working for a charity (latterly there were also options of serving in the police or gendarmerie).

It was obligatory for men but women could volunteer. In 1996 three men were judged by a military court in Marseille for having ‘deserted’ their civil service after 10 months.

After it was abolished...

It was replaced, in favour of an all-professional army, by the much less onerous Journée défense et citoyenneté (JDC), a one-day course for all young French men and women.

This is meant to inform young French people about their rights and obligations as citizens and about how national institutions work. It has to be completed between age 16 to 25 following the young person’s official registration at the mairie (recensement). It includes an explanation about national defence and ways in which it is possible to give service (see below).

Showing a certificate of completion is required for taking the Bac or a driving test.

In the 2000s laws were passed promoting voluntary service for charitable or government bodies, called service civil and then, in 2010 under Nicolas Sarkozy, service civique. The current scheme (service-civique.gouv.fr) is open to young Europeans for six months to a year in accredited projects in sectors such as aid to the needy, emergency services, education, culture, sport or the environment, in France and overseas. They receive a monthly allowance of €473-581 plus an expenses amount of at least €108.

It is possible for young French nationals aged 17-27 to sign up for volontariat dans les armées, which consists of a one-year contract (renewable up to four times) to join the forces on a temporary basis. They receive pay and lodging and can rise in the ranks. There are also two forms of military ‘reserve’:

A further option called Service Militaire Volontaire (SMV), was launched under François Hollande, for young French men and women, aged 18-25, aimed at those lacking qualifications and direction. It has been trialled since 2015 in several locations. The young people receive board and lodging and €313-675 net/month. It lasts a year and combines a taste of military life (including wearing uniforms and living in barracks) with broad training meant to improve employability. It is in partnership with the private sector and includes work placements in firms. A few thousand people have taken part and an evaluation is due at the end of 2018.

What is happening now?

The terrorist attacks in Paris in 2015 gave rise to calls from MPs on the left and right for reintroducing military service, with some suggesting making the SMV (above) compulsory.

Connexion sought to find out from the Elysée and Defense Ministry if the SMV is being abandoned due to Mr Macron’s plans, but we have not yet received an answer.

Nor is it clear if there will be any change to other schemes like the JDC or Service civique or if Mr Macron’s scheme will be open to non-French people in France, either on an obligatory or voluntary basis.

No previous scheme of a ‘military’ nature has been open to non-French people however Mr Macron’s plan is not exclusively military.

He has repeatedly said he wants compulsory national service but details had been vague until recently.

According to France Info, which saw a leaked report, the latest suggestions involve a one-month phase, obligatory for all young French people and a second voluntary phase from three to six months.

People would have to complete it before age 25 and it might include experience with the military or in another sector such as with a charity.

The first phase would be at age 15-18, probably in the holidays. It is proposed there would be two weeks in a residential centre, centred on team spirit, manners and values, including learning about ways of being involved in defence and security.

It might also include doing sport, learning first aid techniques and about how to act in an emergency.

It would be followed by a two-week ‘group project’.

The residential session could also allow for checks on health and skills and to find out if people have family or social difficulties, France Info said.

The plans should be firmed up in the autumn after consultations with young people but 14 youth organisations said in Le Journal du Dimanche that making public service obligatory is wrong and there is more value in choosing freely to commit oneself.

Others have pointed to difficulties for apprentices and university students to take time off for this.

Questions have also been raised over funding and who is going to be responsible for teaching these young people as military personnel’s time is already under pressure.