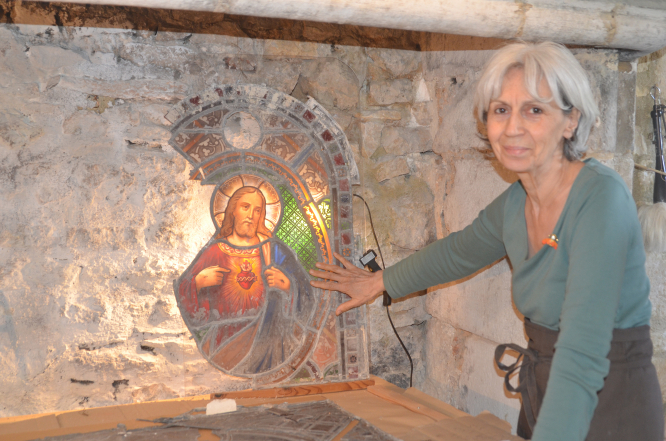 France has more stained glass windows than any country in the world, which means there are opportunities for stained glass experts to work on restoration projects as well as modern creations.

At present there are 450 businesses with 1,100 maître verriers or vitraillistes and around 80% of their work is in restoration. Their skills are recognised around the world.

Chantal Jean has her workshop in the oldest house in Rocamadour, Lot, close to the sanctuary and its seven chapels and has taken care of all the recent stained glass restoration work at the site.

She is now working on a 19th-century window with a figure of Christ and says it will take about a month to complete. “I keep as much of the original as possible, and if there is a break I prefer to patch it up rather than replace it with a new piece of glass.

“It is conservation work in the strictest sense of the term.

“Most of the stained glass I restore dates from the 19th century as, in general, works will last for around 150 years before they need attention.”

The stained-glass craftsperson has to master many skills. First, he or she must make measurements, and tracings and then make an exact drawing of the final image. The shape for each piece of glass can then be cut out and used as a template for cutting the glass, using a diamond or tungsten carbide implement.

It is a delicate job. The craftsperson taps on the glass with a special hammer to release the required shape and uses pincers to trim it.

In churches the faces, hands and feet of biblical characters are often in clear glass with the details painted on to them with a paint made from metallic oxides fired in a kiln at 630°C so the colour will penetrate into the glass.

Then, the whole piece has to be constructed using lead, but also other metals to reinforce junctions and the application of a special mastic.

Ms Jean says it is a very fulfilling craft because there are so many different skills: “You have to be methodical, precise, know the techniques, have a sense of the ethics of restoration and a respect for the work before your eyes.

“You also have to be able to draw and have a sense of design. A sense of colour, too, but that is very personal and everyone has their own vision of what they think works.”

As well as restoration she creates windows and light fittings for private clients: “This is my creative work and I would say it is my recreation after the rigorous restoration work.”

There is a two-year CAP which can be full-time or part-time. You can then go on to do a Brevet des Métiers d’Art, BMA (two years), or a FCIL, Formation Complémentaire d’Initiative Locale (one year), both equivalent level to the Bac and after that a two-year Diplôme Des Métiers d’Art, DMA. Professional qualifications can be taken once working; CQP, Certificat de Qualification Professionnelle. For adults there is a one-year CAP course run by GRETA, at Chartres.

Ms Jean is an example of someone who made a successful career change. She used to work in the luxury hotel world but gave that up at the age of 38: “It is difficult to describe why but there was a moment, in my mind, when I had this fixation that I had to become a stained glass craftswoman. It was a very deep conviction.”

She says she has always drawn and that she has always had a fascination for the multitude of colours that are reflected in glass. “I don’t know why, but I have always been attracted to stained glass. I did a six-month course for adults at a school in the Alpes-de-Haute-Provence, which no longer exists. That was 25 years ago.”

She was looking for premises to work from when, by chance, the mayor of Rocamadour said he wanted to do something with the oldest house in the famous historic village, which was empty and was falling into disrepair.

He offered it to her for a rent of €260 a month and, as the house opposite was also for sale as a home, it seemed that fate was on her side.

“It was hard at first. Not everyone was jumping at the chance to buy stained glass and for three years, I was not sure I had made the right decision but now I know I have. I have continued to do additional training courses, as six months is not long to learn a craft.

“I am passionate about it and love every minute, but I would say that anyone who wants to have a career in stained glass must have a deep and profound desire to do so.”