Sailing into the future of freight transport 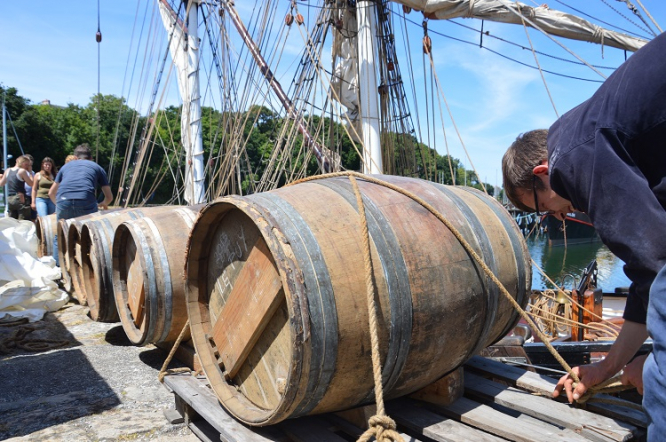 Wine barrels are strapped on board for a voyage from Bordeaux while the Grayhound, below, crosses to the UK
By Samantha David

“We’ve added routes to Bordeaux and are planning to sail to Madeira and Porto next,” says Guillaume Le Grand, the founder of TransOceanic Wind Transport (TOWT) in Brest.

He started TOWT five years ago and it now uses 12 sailing ships to transport 155 tonnes of goods a year – including wine, beer and new potatoes – between France and the UK.

Gradually new destinations were added, including the London port of Tilbury, and now they are in the process of designing their own vessel.

Mr Le Grand said: “It’s a marathon task but the design is coming on and we’re in the process of putting the finance in place. Obviously, transporting freight is a green alternative to conventional shipping but it also personalises international trading.

“People are often waiting for our arrival, they know who we are and what cargo we’re bringing. And everything we ship is labelled with a consignment number so consumers can trace exactly where things came from, which vessel they travelled on, even which sailing.”

Shipping by sail is labour-intensive (goods are loaded and unloaded by hand) making it a bit more expensive than in typical large containers but for consumers of organic, speciality and eco-friendly goods, it adds value.

“One of the ships we use, the lugger Grayhound, takes five tonnes of cargo, mainly bringing artisanal British beers and taking back French wine - and now, we are offering passengers the chance to sail on it and help.”

A new warehouse in Brest means TOWT can amalgamate cargoes. Mr Le Grand said: “Basically, we can ship anything for anyone.”

He is enthusiastic about working internationally: “We love having a strong British connection.

“Brits love the concept of shipping by sail, they love the romance of the sea, the adventure of it, the novelty. In contrast, the French tend to be risk-averse, and less optimistic about new ideas. But we love building our shipping community, making connections between Brittany and Great Britain.

“Our business is all about connecting people - and that is exactly what happened last year when The Connexion wrote an article about us!”

Linking the quality of his products to the land on which the grapes are grown, he said: “Ecological issues are close to my heart. Finding a green way to transport my products was on my mind so when I saw an article in The Connexion about TOWT running  sailings between Brittany and the UK, I contacted them immediately.”

Three days later, he was loading crates on to a boat in Bordeaux. “It was a bit of a panic but we shipped products to Falmouth on that sailing, and have been working with Guillaume and TOWT ever since.”

One recent project involved loading two ex-Sauternes barrels of gin onto a sailing ship with the plan to leave them onboard from May until September to age the gin.

“The barrels will give the gin a Sauternes finish. The boat’s movement travelling to and fro across the Chan­nel will age the gin and the sea air will also add something to the taste.”

He says it is rare to age gin but hopes for a great result for the resulting limited edition of 600 bottles.

A first experiment, with Isle of Arran whisky finished in ex-Sauternes barrels, was a success. “It was financially risky and a steep learning curve but it worked so we plan to age other products in the same way.

“Finishing in white wine barrels is less risky than red wine casks, and Sauternes has a slight sweetness to it.”

As for the idea of shifting freight by sail, he said: “It’s exciting, amusing, very now. It’s sustainable and links France with the UK in a real way and references our shared history. It fits with Thompsons because I make products that are personal, small-scale. I’m doing a Channel crossing with them this summer, and may perhaps get to taste the gin and see how it is doing!”