Modern apprenticeship from the Middle Ages 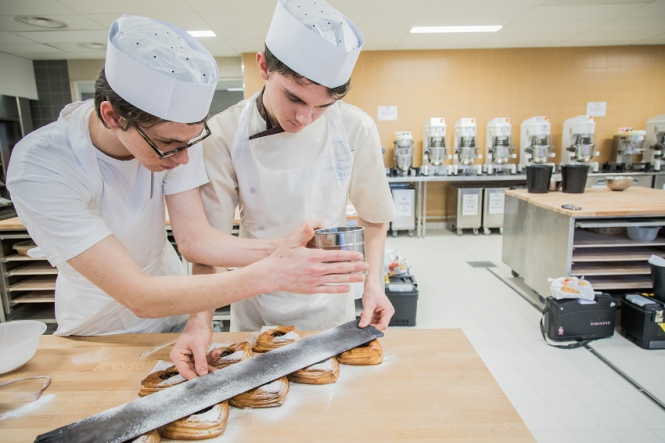 Over the past eight centuries, Les Compagnons (compagnons-du-devoir.com)  have been involved in the building of cathedrals, the Eiffel Tower and many other landmarks.

In the 21st century, they have moved with the times and train people in the skills of today and the future.

Unesco has included the organisation in its Intangible Cultural Heritage list, which includes practices that are considered to be part of a place’s cultural heritage.

It is a unique form of education in France.

Anyone with a passion for one of 30 skilled trades, including bakers, mechanics, carpenters, stonemasons, roofers, shoemakers and metal-workers, and the motivation to learn as much about their trade as possible can become part of it.

It is based on a system of apprenticeship where professionals pass their savoir-faire to the younger generation.

First, you have to have an initial professional diploma, which can be a CAP or a Bac Pro, either taken in a Compagnons du Devoir centre or in another school.

Those who study in a Compagnons du Devoir centre will immediately understand the philosophy behind the organisation. They will work for six weeks and study for two, when they will often be taught by Compagnons.

The initial courses are open to students straight from college or those under 25 who have started other studies but have decided to change direction. The centres also provide other post-CAP and Bac Pro courses. After the initial qualification, the next step is to embark on the so-called Tour de France as an ouvrier itinérant, or itinerant worker, which can last on average between four and six years.

Those on the Tour will spend a minimum of six months in each placement and then move on to a business in another part of France, abroad in Europe or sometimes further afield.

During that time they will be salaried, and they will live in one of 60 Maisons des Compagnons spread around the country. As well as working, they will study with professionals in their trade in the evening.

The Maisons des Compagnons are run by a prévôt, a Compagnon who has taken a break from his trade to undertake this task.

He has 60 ouvriers itinérants on the Tour de France staying there, plus 30 studying for a CAP or Bac Pro.

He said: “Our training is based on three principles: the job, because the person will be a serious worker; the journey, because during the Tour de France the trainee will meet, discover and learn about all the regions he goes to, as well as aspects of his trade; and the passing on of experiences and knowledge.

“Sharing and being open to the world is an important part of being a Compagnon, and so we have the Maisons where, instead of students going home to an apartment on their own, they will live with other people who are going through the same learning experience as they are.”

It is also different from other systems because the person is paid, and lodged, so lack of finances is not a hurdle to this form of study.

“We will want to know why the person has chosen this job and just how much determination he has to go the furthest possible in knowing everything there is in his field, as dedication is an absolute requirement if you want to follow this path.”

There is no time limit to finally becoming accepted as a Compagnon.

When a person is ready, they have to present either a model, a finished piece of work or a detailed dossier of research to show that they have assimilated as many aspects of their job as possible and are willing to push the boundaries to create something new.

“In our Maison, we had a builder who came up with a method for creating beautiful staircases in concrete in a new and simple way, which I think could change the way people work,” said Mr Mailhol.

“We also have a saddler who was an apprentice with Decathlon, and who designed a rucksack prototype and researched the methods of how to make it, and he has now been asked to go to China to organise its production from A to Z.

“He is just 23, and one strength of our system is that you get pushed to take responsibility very early on.” This piece of work is near equivalent to a PhD thesis in the academic world.

There are 15,000 Compagnons in France and 3,200 ouvriers itinérants at present on the Tour de France.

Atelier Bretel is a family cabinetmaking business in the Dordogne, where both father and son are Compagnons.

Xavier Bretel trained for 10 years before he joined his father’s business. Four of those years were spent on the Tour de France, and that was when he learned the most about the different techniques and skills of his trade.

He said it is tough as you are away from your home for years, rather than just months, moving around and never settled. You have a lot to do, as you are both working and studying. His father Pierre says not everybody makes it through to the end.

He said: “As a Compagnon, it is my duty now to train up young people. I have an apprentice Compagnon working with me now, and twice a week he has to stay on with me until 10pm.

“He then has to drive back to his Maison, and he is back with me early the next morning to start work again. You have to be really dedicated.”

Both agree that it is the best way to become a highly skilled and competent craftsperson.