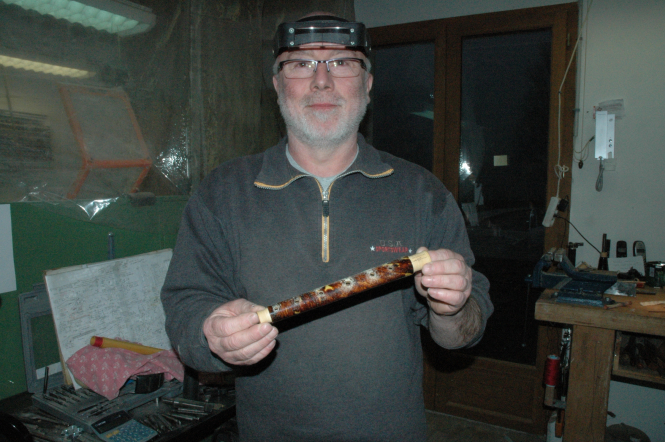 Mr Holmblat, 62, learned the basic techniques when he studied mechanics and draughtsmanship at school and on an instrument repair course – then went on to develop much of his art by trial, error and persistence.

He fell into the business as a young man when a flute he was learning to play needed
expensive repairs and his teacher suggested he fix it himself. He went on to get a qualification to mend instruments and opened his shop in Pau, in the Pyrénées Atlantiques.

His love of the recorder also came from his teacher.

He said: “One day he gave me a disc of someone playing the recorder. It was a revelation. I instantly fell in love with this instrument.”

So he started making them: “The first one was a simple, three-hole traditional flute. Fortunately, it played well.

“From then on, I worked at it. When you make instruments, you have to remain humble because you can never learn all there is to know about making the perfect instrument.

“To be an instrument-maker you do not have to be a musician, but you do have to have a real love of music.

“You need to be good with your hands and have a good technical and mechanical knowledge to know how to put things together. You need to be meticulous.”

Mr Holmblat’s recorders, made in the workshop at his home near Pau, cost from €200 to €1,870 depending on the materials, complexity and time needed to make them.

He said: “I think it is important to go and see your musicians face to face, so that takes time away from the workshop, but it is important to spend time building relationships with the people who are going to play your instruments.”

Mr Holmblat makes about two instruments a month, and he has four on the go at any one time.

Choice of wood is important. Most of his are made from boxwood from the Pyrénées, which has to be cut at the right time of the year and during the right phase of the moon.

His preferred wood grows at altitude, which he says makes it denser than faster-growing boxwood found on the plains.

One of his most extraordinary recorders, made in 2010, is in tortoise shell and ivory, which is a replica of an 18th century one he saw in a museum. He had to adhere to the strict regulations in force for these precious materials and had to learn how to work the tortoise shell, which few people in France know how to do. It is a remarkable, beautiful piece.

His reward is hearing his recorders, each one of which is unique, played sympathetically by a musician who really understands and appreciates the instrument.

“When I go to a concert where someone is playing one of my recorders I am always concerned that something will go wrong with the instrument. But when I hear it, it is an immense pleasure,” he said.

French wind instrument- makers are regarded as among the best in the world. The Institut National des Métiers d’Art says that 90% of professional musicians play French instruments.

The main competition is from Asia but as their makers concentrate on beginner and amateur instruments, France still dominates the high-end market. Three-quarters of woodwind instruments made in France – from bassoons and clarinets to recorders and oboes – are exported.

There are a few semi-industrial manufacturers, such as Buffet Crampon, Rigoutat, Marigaux and Selmer, but most woodwind instrument-makers in France are sole-trader
artisans, making, repairing, and restoring instruments.

A maker must master several disciplines - from knowing the type of wood to use, how to season it and work with it to having the skills to produce each instrument’s distinctive shape, using precision tools.

Making the borehole through the main body cylinder is important to achieve the sound required. Understanding the mechanics and the science of the instrument is vital to be able to make the finger holes the right size and the right
distance apart.

The maker must have musical knowledge to be able to fine- tune the instrument. Finally, as many instrument-makers work on their own, they must be able to sell their finished result, which can include making contacts with musicians, creating websites and going to trade fairs.

There are opportunities to learn the craft but available courses are designed more for repair and factory work than for being an independent maker.

This can be followed by a two-year Brevet des Métiers d’Art called BMA Technicien en facture instrumentale, option instruments à vent, which introduces more techniques but leads to work in a factory.

After this there is a two-year DMA (Diplôme des Métiers d’Art), the equivalent of a BTS, called DMA de facteur d’instruments à vent.

The Institut Technologique Européen des Métiers de la Musique at Le Mans is one of the best-known places to study.

However, no one needs a qualification to make and sell instruments. Most instrument-makers learn by getting in touch with a maker and by watching him or her at work.