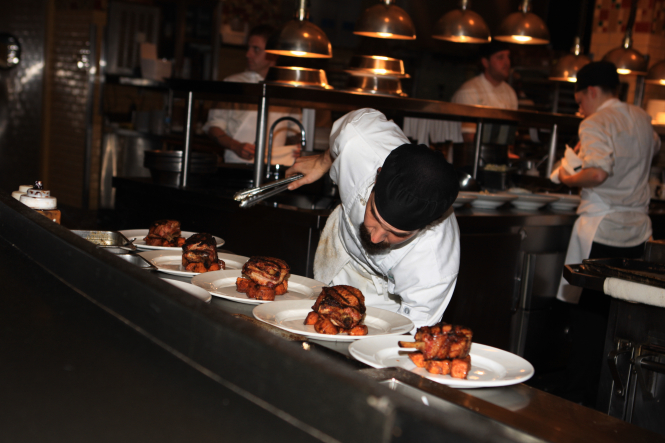 With temperatures often passing 40C in the kitchens of busy restaurants, it is little wonder that tempers among members of staff can fray
By Brian McCulloch

Unemployment in France stands at 8.7%, and the rate is in double figures in many towns – but restaurants still struggle to find staff.

At the end of last year, the state jobs agency Pôle Emploi said there were 286,000 unfilled jobs in the sector.

Now the main employers’ union in the industry is trying to make restaurant work more attractive to job hunters, and not just by boosting pay.

Projects include setting up a new form of digital work contract, called a contrat de mobilité.

This will allow employees to have permanent (CDI) equivalent contracts but allow them to move between restaurants, listed on a dedicated website, according to each outlet’s needs.

“There is a real demand and limited supply so most people, once they have proved their worth, end up with more than the SMIC,” he said.

Prompted by the government, UMIH published five measures it will take to try to improve the attractiveness of the industry.

The other four are practical: aiming communication at students in collèges to encourage them to think of restaurant work as a career; strengthening relations between restaurants and training establishments; implementing the contrat de mobilité; and finally encouraging restaurants to pay more.The extra pay could come from a currently unfashionable system that was widespread shortly after its introduction in the 1930s.

Workers were paid a proportion of their salary as a percentage of the day’s takings – paid for by a “service” levy on the price of food and drinks.

This method of boosting staff pay is now maintained only in a few Parisian bistrots, but UMIH said it could be reintroduced nationally.

Talks are taking place with the government over the contrat de mobilité.

It has been a point of contention with some chefs that no qualifications are required to open or work in a restaurant, while in other sectors, such
as hairdressing, only qualified staff or those in training programmes can be employed.

Even so, the jobs in restaurants are not attractive. Many people in temporary work have, at some time or other, worked in restaurants.

Few have nice things to say.

Alex, 35, has worked in four restaurants in the south west: two fast-food, one high-level and one mid-level.

He said: “The main problem is that the bosses are almost all bad.

“They shout and scream, and on occasion they have even thrown things at me. Then they complain that no one wants to work there.

“One even tried to make trouble for me at the Pôle Emploi, saying I was lazy, which isn’t true. It’s not surprising no one wants to work in the kitchens.”

Working in a restaurant means shifts at odd hours.

But he said he was prepared for that, and liked the later start to the day.

“It gets hot in the kitchen – often over 40C – and you are physically very close, so if someone is disagreeable you cannot just walk away to cool off. It is much better doing other work if you can get it.”

Hotel union boss Mr Jan said the image given by Alex was now out of date. “There might be one or two bad apples but most restaurants now make a big effort to give a good image to employees.

“It is in their interest to do so, because word of trouble soon gets around,” he said.

“Our members are finding it more and more difficult to recruit, things must improve soon.”

Karim Guyomard, who runs four restaurants at Saint-Brieuc, Côtes d’Armor, said he has found it increasingly difficult to recruit staff – notably sous-chefs – over the past three years.

He said: “I put in about 100 job ads with Pôle Emploi, but I only had five replies, and they were all negative.

“Now, out of 40 members of staff, I have 13 that I am training on the job, instead of employing people from catering college.

“All the trainees come from overseas. Many of them are refugees, from Malaysia, Guyana, Bangladesh, and other countries.

“It may be in part because the restaurant trade has a bad reputation for working conditions, but people looking for work with Pôle Emploi won’t even come to find out what the conditions are.

“The young today in France seem to want money, but are not prepared to work unsocial hours to get it. The refugees are all keen to work hard and learn.”