How to keep noisy and messy pigeons away from our French garden? 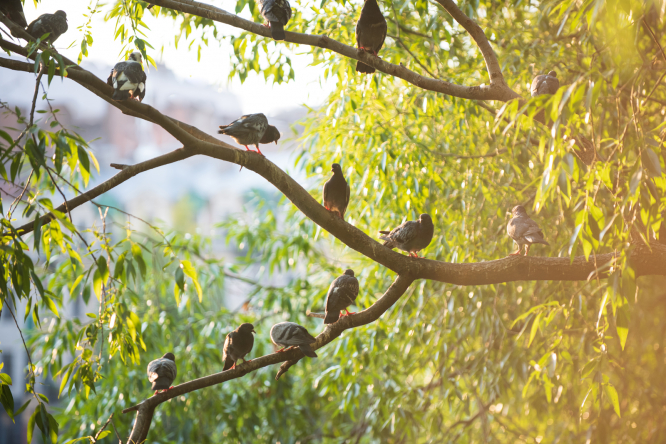 Several communes also work to deal with pigeons, which they class as nuisibles (harmful animals), so ask if your mairie has similar policies Pic: Igor Kovalchuk / Shutterstock

Reader question: We have too many pigeons in our garden in France: I counted hundreds in the trees. They make a mess and a noise. How can I keep them away?

There are several solutions proposed by different firms, one being installations meant to scare them off, such as outlines of birds of prey, mini-windmills, or bells.

They can be found with a search online for effaroucheur de pigeons. Home-made solutions include hanging up reflective items such as old CDs. A similar system is ballons répulsifs, large balls with eyes marked on them, which can be hung up.

Mixed success is reported from users of such devices, but they may be worth a try.

An alternative is an ultrasound device – ultrason à pigeons. A variety of these are sold online, though we note that one that comes up easily with a search has many poor user reviews on Trustpilot.

These devices can also be bought in garden centres, which may be a safer bet. They work by emitting sounds meant to be too high-pitched for humans to hear.

They should not be confused with other répulsifs sonores which make a noise that people can also hear. Check the effective range claimed for the device.

Repellent sprays (spray répulsif pigeon) are more suited to spaces such as balconies as are dissuasive stretched-out wires or spikes (pics anti-oiseaux) to stop them perching.

Several communes also work to deal with pigeons, which they class as nuisibles (harmful animals). For example, Cannes set up municipal dovecotes to attract the birds away from homes. This also allows the town to reduce numbers by destroying eggs and also to check for diseases. Neuilly-sur-Seine uses falconry to scare pigeons away. Toulouse captures and sterilises the birds.

It may be worth asking if your mairie has similar policies. Some communes also fine people for feeding the birds.