Should I take French nationality?

Barbara Heslop replies: You are habitually resident in France so the French rules for succession and inheritance tax will apply on your death.

In accordance with these rules, your children would be automatically entitled to receive two thirds of your estate on your death in equal shares (so one third each).

Assuming neither of your parents is still alive and you do not re-marry, your children would in fact share your whole estate in the event of your death.

However, you could make a French will leaving the one third of your estate which would not automatically pass to your children under the reserved portion, to some other relative, friend or charity.

In terms of French tax, your children would each be entitled to receive the first 100,000 of their share of your estate tax-free and inheritance tax would then be payable by them on a sliding scale (between 5% and 45%) on the balance of the value of the assets that they each received.

It makes no difference from a succession or tax perspective if you were to become a dual British- French national. Becoming a French national would not entitle you to any preferential tax treatment. However your British nationality allows you to make an election of British succession law if you wish. This would not change if you took dual nationality.

inheritance
nationality
tax
More from Your Questions
More from Connexion 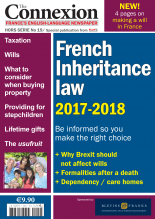