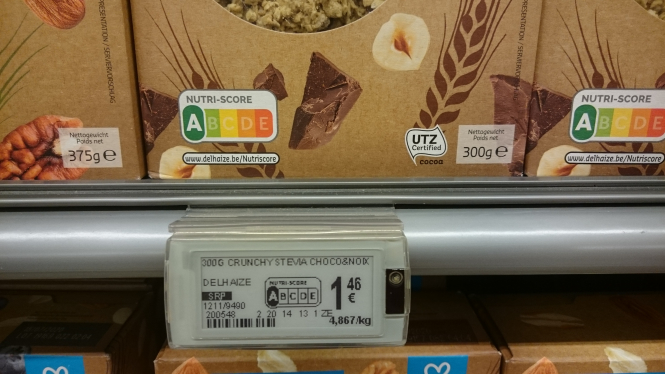 The Nutri-score system, meant to show you at a glance how healthy and nutritious a food is, was adopted by the Health Ministry in 2017 and offers colour and alphabet-graded coding for food, with green and A for foods judged to be the most healthy and red and E for the least.

It works by assessing how much of the food’s weight is made up of elements that people are encouraged to eat more of, such as fibre, protein, fruit and vegetables, and those that should be eaten in moderation, such as saturated fats, salt, sugar and anything very energy-dense (therefore high calorie).

The system has since been taken up in Belgium, Spain, Germany and the Netherlands and has been praised by the European Commission and the World Health Organisation.

Not every food package has the label, though, because the European Union has not yet agreed that Nutri-score should be part of the standard requirements.

Neither the Health Ministry nor the Finance Ministry, which has responsibilities for consumers and fraud, was able or willing to give information on the state of talks with the European Union, nor to predict when Nutri-score would become obligatory on food packaging.

A number of manufacturers, including Kelloggs, Danone, Nestlé and French supermarket chain Auchan, have pledged to use the labelling. In February, Pepsi Co said it would adopt it for its Alvalle soups, Lay’s crisps, and Quaker breakfast cereals.

For manufacturers, apart from the benefits of giving customers clear advice, one attraction is that the rating is quick and easy to calculate using guidelines from the UK Food Standards Agency nutrient profiling system.

Italy, however, is opposed, fearing that several popular – and healthy – products, including oily fish and olive oil, will be adversely affected because they have a high fat content, which would give them a D or E rating.

food and drink
healthcare
More from Your Questions
More from Connexion