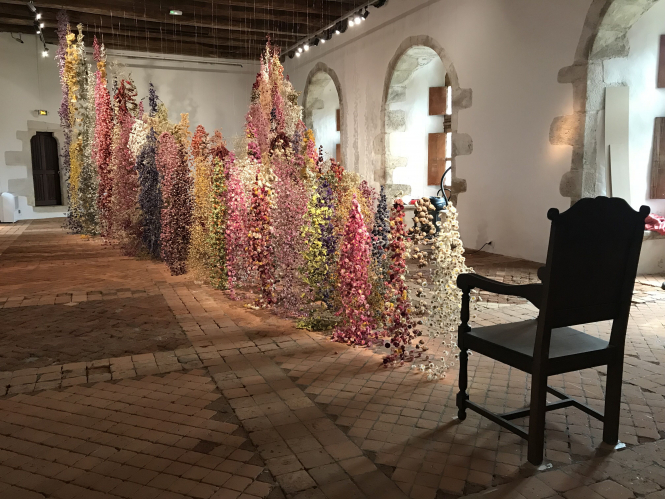 Rebecca Louise Law who has been making artwork out of fresh and dried flowers since 2003 was invited to create a piece called the banquet for La Roche Jagu Château in Normandy.

She chose to use old French dried flowers saying she was inspired by the original architecture of the chateau.

The chateau was originally a fortress which was re-built it in the 15th century. It was then renovated in 1968 to become a place for exhibitions and cultural shows.

With the help of 19 people including volunteers, Ms Law, 38, took six days to install her work. The everlasting flowers – which include helichrysum, rodanthe and carthamus – came directly from a local farm.

“I love exploring why we feel like we need to be close to nature and [using flowers] is like bringing fantasy to life”, said Ms Law.

Her primary source of inspiration is nature itself, she said.

She grew up in Lode, a village in Cambridgeshire before settling in a studio in East London for 15 years. She has now moved to Wales, where she can be “closer to the nature”.

She has always been around flowers as her father was a gardener and her mother used to make art and decoration with dried flowers. She studied fine art in Newcastle.

As she used to paint flowers, she said: “I was a painter and I wanted to be able to paint in the air. […] Suspending [flowers] gives a sense that you are walking in the painting.”

She already exhibited in a chateau in the Loire Valley but she was “fascinated” by La Roche Jagu Château in Brittany, where the exhibition is held from May 11 to October 6.

Fifteen other artists take part in the exhibition named Arte Botanica, including photographers, videographers and sculptors.

More information on the exhibition here.

art
exhibition
More from Our Pick
More from Connexion