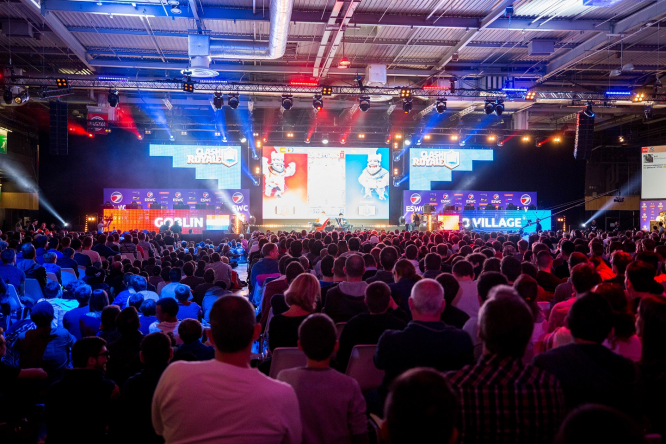 They can play games suitable for anyone from age three upwards, discover new products and trends and learn what jobs are available in this fast-expanding sector. Last year 304,000 people attended the Paris showcase for the video game industry.

Esport competitions, in which audiences go to arenas to watch other people playing on huge screens are becoming increasingly popular. The International Olympic Committee is considering including esports as an Olympic discipline at the 2024 Paris Olympics.

According to Emmanuel Martin, who is both head of the union of Video Game Publishers, SELL which organises the fair, and Secretary General of France Esports, which aims to develop the competition aspect of gaming, one in two people in France play video games at least three times a week.

“We are a country of gamers,” he said. “The image of video games is beginning to change so that it is acceptable as one of the leisure activities people take part in just like playing football, reading or going to the cinema. We are talking about all aspects of video games, from those played at home to those played on line. It is becoming more and more popular and every year we have around 300,000 people attending our annual Paris Games Week.”

The average age of players is 35, equal numbers of women and men who play, and since people began playing on line gaming is beginning to lose its image as an activity for lonely teenage boys, shut away in bedrooms, he said: “It is, above all, sociable as people enjoy playing together, either in the same room or online when they can communicate with people all over the world.

“The possibility of streaming now means it is also becoming a spectator activity where people watch others playing and take great pleasure in doing so.”

“However, tests have shown that playing can improve brain capacity because you learn to manage several different procedures at the same time and deal with complicated situations. There is often a lot of strategy involved and it can certainly require a lot of intellect.

“If you see your son or daughter with a strange expression after playing it is because they have been concentrating very hard. We say that these games are easy to play but very hard to master.”

France was one of the first countries to give esports a legal status in 2016. This introduced regulations in the industry and also differentiates video game competitions from gambling.

So when does a video game become an esport and what does that involve?

“Some people make a very good living from it, but it is a very small proportion and you have to be exceptionally talented and work very hard to succeed. Usually potential players are discovered online as they climb the ladders in their game and are seen to be winning more than others.”

The Media Team for the International Olympic Committee told Connexion that the Olympic summit of October last year concluded that “Competitive esports could be considered as a sporting activity, and the players involved prepare and train with an intensity which may be comparable to athletes in traditional sports.”

It also said that a recommendation in the Olympic Agenda 2020, was to make the Olympic Programme more flexible “by moving from a sport-based to an event-based programme.” For the 2020 Olympics at Tokyo games five sports have been added - baseball/softball, karate, skateboard, sports climbing and surfing. IOC President Thomas Bach has said that these additions were included to attract young people: “With the many options that young people have, we cannot expect any more that they will come automatically to us. We have to go to them.”

At the 2018 Winter Olympics at PyeongChang in South Korea the IOC drew up a partnership with Intel who put on an international tournament of the game StarCraftII in the lead up to the Olympics and during the Games their official licensed Steep Road to the Olympics game was on offer, with opportunities to play throughout the Village.
Esports were included as a demonstration sport at the Asian games in Jakarta and Palembang, Indonesia in August and September this year, with six video games featured, including League of Legends. They were played as competitions, but without medals. There were promises they would become a medal sport in the 2022 Asian games, but this is now uncertain, with a suggestion the games need an International Federation first.

Mr Martin said he is convinced esports will eventually become part of the Olympics, if not at Paris in 2024, then at the 2028 games in Los Angeles. “After the Rio Games the Olympic Committee were disappointed in the poor turn out of under 25s and they know that video games attract young audiences, so I am sure it will find its place at the Olympics.”

Whether esports can be regarded as a sport in the same sense as athletics, though, he said, is a philosophical point: “It depends whether you think sport should include a physical element. However, as regards the Olympics, there is nothing to say they should just include physical games. It is a question of the times. In the original Olympics in Ancient Greece, I have read that poetry competitions were included, so why not now, in a different era, esports?”