Wacky race of bosses and workers on mopeds at Le Mans 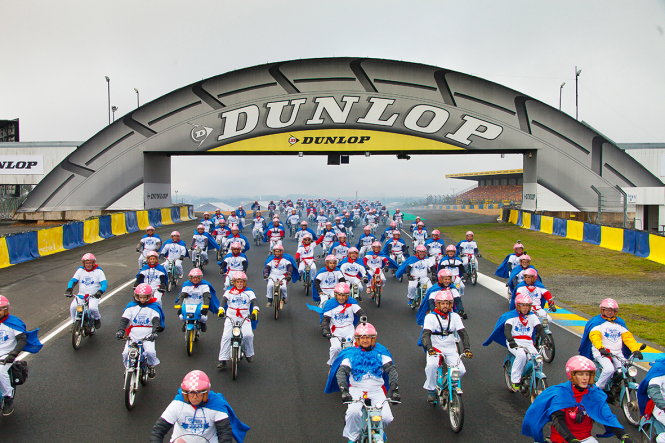 The race is known as La Meule Bleue Grand Prix – meule meaning moped and bleue in reference to the blue capes worn by competitors.

Franky Zapata, the Frenchman who recently made headlines for crossing the English Channel on a jet-powered hoverboard will be there to start the race on his flying machine.

The race is one of many held since 2014 when Philippe Maindron, the former director of a masonry company, organised the first event as a way to bring together his company’s employees, customers and suppliers.

The first event was a motorcycle race which featured 150 racing teams. Two years later in 2016, 450 business leaders and their teams raced down the Champs-Elysées, which was closed for the occasion.

The race is designed for small, medium or large companies who want to experience something other than the daily grind of work with each other and alongside other entrepreneurs. Each company can either buy and renovate their own vintage moped, or hire one from the Meule Bleue association complete with fuel, insurance and technical assistance.

The aim of the annual race is to strengthen team cohesion and bonds between co-workers whilst giving everyone a chance to let their hair down and have fun together. So far, 850 vintage mopeds have been restored and more than 1000 business leaders accompanied by over 20,000 of their employees have taken part.

However, this Grand Prix weekend, held at the Bugatti racing circuit in Le Mans, will be the last Meule Bleue event.

Mr Maindron has announced he wants to create a different eccentric event for the future but wanted to finish the story of La Meule Bleue on a high before moving on to new ventures.

To celebrate the retirement of the Meule Bleue annual race, the weekend will also include the opportunity to camp by the racecourse, a parade, concerts and a DJ.

Tickets to watch the race cost €12 and can be found on the Meule Bleue website at http://www.meulebleue.fr

race
events
More from Our Pick
More from Connexion

16 hours ago
3
Coronavirus: Daily updates on the situation in France