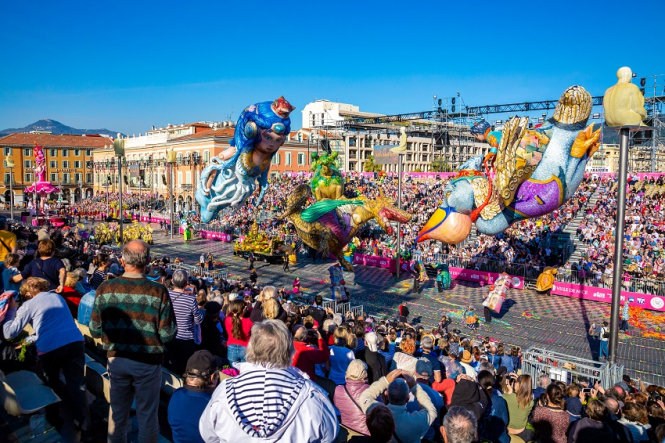 The theme for this year’s world-famous carnival is ‘King of Fashion’, so you can expect to see extravagantly dressed royalty rocking outfits intended to make you reflect on the history and nature of fashion.

As well as the float parades – which will be displayed on giant screens for all to see – there will be two light parades and a flower parade, in which flowers are thrown to the public.

This tradition dates back to 1876, when the initial idea was to throw flowers to entertain tourists.

Today, the parade is intended to pay tribute to the local flower farmers, with 80% of the flowers used being produced locally.

This music festival features 35 artists in a series of concerts across 26 venues.

It begins with a bang thanks to the ‘Jules Box’ musical quiz show, where the audience will be divided into blue and red teams and will compete with buzzers to identify music played by an orchestra.

It will feature performances by a rock pianist, a beatboxer and a four-piece band who can play 35 instruments between them, to poetry set to music, stories told in concert and musical theatre.

This festival celebrates the mimosas that flower in the region every year from January to March.

There are eight days of activities and celebrations to take part in, starting with an inauguration of the year’s ‘Queen of the Mimosa’ at the Notre Dame des Mimosas chapel.

There will be evening shows, nature walks and daytime parades as well as a possibility to learn about  locally made mimosa perfume and the chance to create some for yourself.

This market for wine-growers and local cuisine will feature 1500m2 space of stalls showcasing more than 40 exhibitors.

Here you can taste the best wines from all over France and find the best deals on authentic produce.

On entry you will be given a glass for tastings with no obligation to buy, so that you can test and purchase the best products for you without breaking the bank.

This international games festival features something fun for all types of players, from chess, draughts and Scrabble to video games, simulated reality games and board games.

You can meet the creators of your favourite jeux in demonstrations, tournaments and autograph sessions, as well as authors at publishing stands.

If you are new to gaming, you can take part in beginner’s classes in the key disciplines of parlour games.

All the hottest games of the moment will be featured at the festival, with an award given to the best game of the year based on its creativity, diversity, mechanisms, rules and fun factor.

The violet festival of Tourrettes-sur-Loup has been held since 1952.

Since 1880, violets have been one of the main agricultural products grown in the area and the festival developed to celebrate the end of the season each year.

Although only the Victoria variety is still grown, the town still recognises the beauty of the flower with music, dancing and a flower battle, in which anyone can participate.

As well as this there are demonstrations and workshops of all kinds where you can learn to do things such as turning violet flowers into violet sugar. There is also a market where various fresh produce items will be available to buy.

The fair runs for just over a week and welcomes nearly 700,000 visitors every year. Split into four sectors, the fair focuses on crops and plants, agricultural services and professions, animals and produce from France as well as from around the world.

There are thousands of things to do at the show, from cheese-making workshops, sheep-shearing demonstrations and quizzes to wine tasting sessions, musical performances and documentary screenings.

It is a great place for children, as they can pet thousands of animals of all kinds as well as join in treasure hunts, agility games and drawing competitions.

Created in time for the 500th anniversary of the death of Leonardo da Vinci, this exhibition highlights the latest historical and scientific research on his works.

It features 120 miniature models made from Da Vinci’s original manuscripts, of which there were around 6,000. It has been put together by an expert team of engineers, historians, graphic designers and craftsmen. See Big Picture, page 24.

This exhibition focuses on the cultural role of the wolf over the centuries, looking at questions such as where the reputation of the wolf came from, how a fear of the wolf developed in the West and how the image of the animal has been constructed from fables and fairy tales.

A collection of ancient works, pieces of art, music, paintings and natural history specimens as well as popular French prints will be on display to enrich your experience of getting to know le loup.

This exhibition features scientific and artistic work to help visitors discover the truth behind the feeling of love.

You can learn about the latest research concerning what love really is, how it manifests itself, how sexuality evolves and how attachments are formed, as well as seeing depictions of love through a multitude of art forms.

In the lead up to Valentine’s Day, Strasbourg opens its doors to all of the romantics by offering love-themed events as part of its ‘Mon Amour’ festival.

The event attracts around 20,000 visitors a year with activities such as dance parties, opera concerts, carriage rides and improv comedy nights.

More than 40 events in total will feature in the programme, highlighting the romantic atmosphere of the city of Strasbourg in winter with its canals, bridges, half-timber houses and cobbled streets.

This medieval fair attracts around 10,000 visitors a year from all over France, who arrive in Normandy to step back in time.

You can expect at least 250 stalls displaying all things medieval, as well as concerts, fights staged in the medieval style, games and competitions.

The main competition of the event concerns who has the best costume, so many will be dressed in the medieval fashion making the experience more authentic.

The Menton Lemon Festival attracts around 200,000 visitors every year.

This year’s event takes place over 15 days and will feature parades, a garden full of citrus sculptures, a crafts fair and an orchid garden.

The sculptures made for the festival can be up to 10m high, with some requiring up to 15tonnes of fruit for their construction.

Each piece of fruit is individually placed, meaning the sculptures take thousands of hours to create. At night these sculptures are lit up to become the ‘Garden of Lights’, while parades with brass bands, orchestras, folk groups and dancers bring citrus-themed carnival floats to life.

The Connexion works with local tourist offices for the information on this page.

Due to possible last-minute changes to programmes and event timing we recommend that you always check with individual organisers before making a trip.