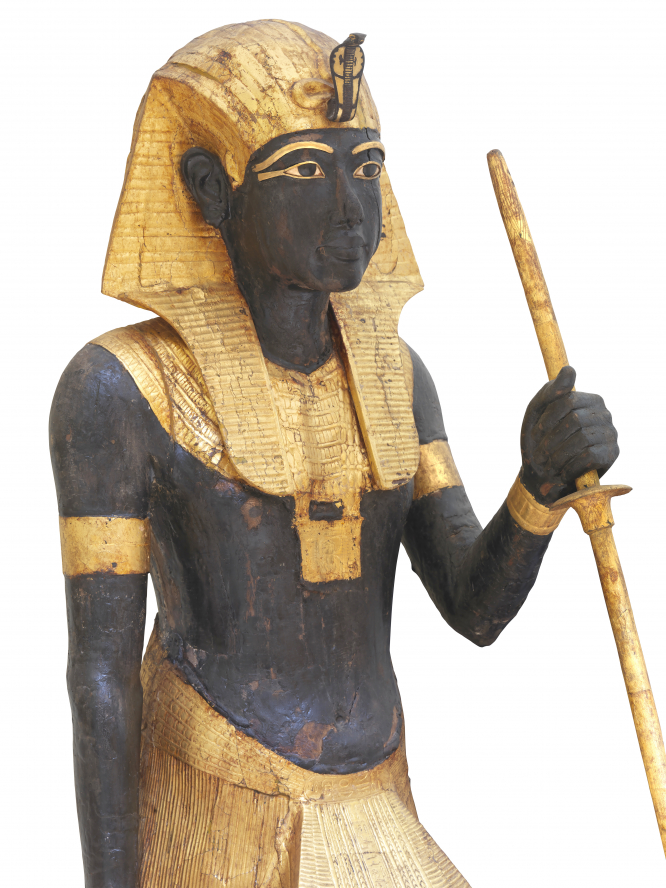 Historical treasures land in the capital

There is no Pharaoh more iconic than Tutankhamun, his turquoise striped death mask a blazing symbol of the Egyptians’ wealth, culture and advanced civilisation. For the first time in the history of Egyptology, more than 150 pieces from the treasure chest of the boy-Pharaoh are on display in La Grande Halle de La Villette to mark the 100 year anniversary since British archaeologist Howard Carter uncovered the tomb from the Valley of Kings in Egypt’s sun-baked south.

Amongst the jewellery, sculptures of deities and ceremonial coffins, visitors are taken on a journey through the intense rituals and beliefs of a scarcely understood civilisation. Fifty of the objects on display have never before left Egypt and at the exhibition’s close, will be housed permanently at the Great Egyptian Museum, currently being built in the Giza Plateau.

These precious treasures are the pinnacle of humanity’s cultural heritage: from splendid death masks of the guardians who guarded the Pharaoh’s sarcophagus to impossibly detailed statues crafted from lapis lazuli and gold. On loan from the Louvre is the speckled diorite statue of the god Amun, the boy King’s protector and namesake. Entry tickets are pricey but in light of each artefact’s life span and miraculous preservation, this impressive exhibition is well worth the cost.
lavillette.com/programmation/toutankhamon_e185

This four-day celebration of words sees over fifty French and international authors descend on Nantes to debate some of the most pressing questions facing society and share their literary ideas.

In addition to the actor-led book readings, talks with authors and themed discussions, it is a great place to pick up some new, intrepid reading material by authors from over 20 different countries.

Foie gras has garnered negative press – largely outside France – but in the Périgord, delicacies made from goose liver are relished by the population and this weekend is in celebration of the region’s culinary traditions.

Stock up on local produce in the market, held in the Place de la Liberté and watch as a gaggle of geese are guided through the medieval town.

There are cooking demonstrations, tastings of Périgourdine soup made from a goose carcass and an elaborate banquet, featuring an all-goose menu.

Chariots, costumes and parades bring life to the city’s majestic streets, where the Bordelais throw themselves into the fun from the banks of the Garonne.

Since 1996, the carnivalesque atmosphere welcomes the arrival of spring to the Aquitaine and an energetic cocktail of dance workshops, a grand parade at 14:00 and musical performances awaits.

As well as huge digital displays, carnival goers can now download an app for an augmented reality festival experience.

This hike through the remote beauty of the Massif Central really is a moveable feast. Combining the gastronomy of the region with mountain air, Les Traces allows ramblers to discover the old slate-roofed cheesemaking cottages known as a burons.

At each, there are tastings of regional Laguiole cheese, Gentiane – an apéritif made from a local wild flower – and vin chaud. The routes depart from two ski resorts, Le Bouyssou at Laguiole and Brameloup and three distance options (12, 18, or 21 km) prevent things from becoming too taxing. At the end reward yourself with a hearty portion of cheesy aligot and local Aubrac meat – renowned for its quality –  at Le Royal Aubrac,
a grande dame of a building surrounded by snowy countryside.

Outside, the sun might be shining and the flowers blooming but inside, the nation’s cinemas are paying homage to France’s rich history of moviemaking.

For just four euros, indulge in the nostalgia of New Wave pioneers such as Jean-Luc Godard and Jean Cocteau or the magical realism of Jean-Pierre Jeunet, famous for Amélie. Cinemas across France participate in the weekend.

This winning combination of skiing and music sees some 28,000 festival goers flock to the 650 km Portes du Soleil area.

Ski every morning before heading to the live afternoon concerts where tunes blare out at an altitude of 1,600km. The line-up of French and international rock-pop groups includes Charlie Winston playing in Morgins, Switzerland and Franco-American Gaëtan Roussel in Champéry.

Come nightfall, DJs mix beats in après ski bars, while the peaks of Alps in the backdrop add to the high drama.

Engines growl at this annual classic car festival that brings the retro flair of over 2,600 vehicles to Provence’s theatrical city.

Held at the Parc Expo, amateurs and professionals unite to watch car demonstrations and neck-to-neck races.

Admire 100 years of Citroën’s iconic production while chatting all things automobile. Some cars are for sale, so this a great place to bag yourself a sports car for the summer.

As part of Printemps des Poètes, the Théâtre de l’Usine in idyllic Saint-Céré (Lot) combines poetry with music for
the evening, letting you appreciate the sonority of the two art forms, regardless of your level of French.

This low-key music festival draws people of all ages through its cleverly designed programme of live concerts, some held in intimate café settings, others on bigger outdoor stages in the park.

French artists from all genres perform around Lyon blending pop, hip hop and folk flavours into their popular music.

Each weekend for a month, numerous musical concerts take place in prestigious venues throughout the city.

Discover the prinicpality’s splendid Oceanographic Museum amidst the music of a South African quartet or enjoy the splendour of the Opéra Garnier, accompanied by traditional Mongolian throat-singers.

Visual art displays and talks with artists compliment the music, which combines classical with experimental sounds.

Borrowing its title from Stefan Zweig’s novel, this exhibition at the Musée d’art moderne et contemporain takes viewers through a narrative that oscillates between the banal and the fantastic.

Both oddly familiar and emotional, drawings, sculptures, photography and designs from 135 artists, collected from 1833 to 2019, reveal a glimpse inside the lives of hundreds of women.

As the snows begin to melt in the mountains, a Venetian carnival pops up in the Alps, of all places, organised by the Annecy’s Italian Association. Annecy is known as the Alpine Venetia thanks to the series of waterways that criss-cross the charming town, but blissfully it is free from crowds.

During the festival women wearing beautiful masks and dresses flitter around the lake like colourful birds, taking part in a series of parades and twilight walks. Befitting the setting, the atmosphere is refined and elegant;
a marked difference from the rowdy raucousness of France’s Mardi Gras
festivals in February.

Forget the brass bands and cider-drunk crowds; these masked individuals are completely silent and glide through Annecy’s old town before pausing at the Jardin de l’Europe, overlooking the lake.

Photo opportunities abound here in streets uncluttered by the tourist-tat that clings to the streets of the real Venice carnival. For something a little special, reserve a seat at the lavish banquet, held on the Saturday night.

Fortunately for those who eagerly await Le Tour de France each summer, the Tour de Normandie cycliste means cycle-lovers can get stuck into racing a few months early.

The professionals get back in the saddle for the seven stage race which conjures up a tricky route. Totalling 1,131.5km, the route covers a distance roughly one third of that raced in Le Tour de France. It is both good training for Alpine climbs and a fun way to explore the region.

The Grand Départ takes place at Juno Beach in Calvados where the péloton shoots out of Courseulles-sur-Mer, taking in the rugged coastline before heading inland towards historic towns, via climbs as steep as 7.8%. Each morning, join the cycle-enthusiasts in the stands to cheer off the competitors before trying a more leisurely ride of your own.

The first Tour de Normandie cycliste took place in 1939 but took a pause between the 1950s and 80s, before becoming an annual event once again in 1981.

2 hours ago
4
Covid-19: What is known about the Indian variants in France

G’day Sheila could have been b’jour Bruce
16 August 2019
More from Our Pick
More from Connexion
Get news, views and information from France
Join the newsletter
Subscribe to The Connexion