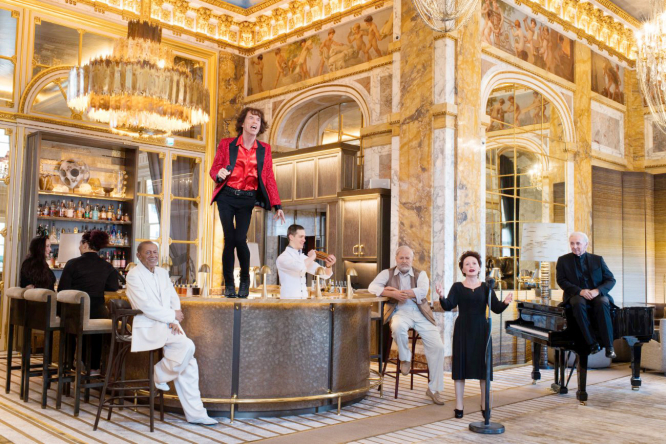 Imagine Edith Piaf singing La Vie en rose in the hotel’s former bistro, with Aznavour and Hemingway admiring her while Mick Jagger struts his stuff atop a piano
By Connexion journalist

Stars at the Crillon, Paris until November 25

To mark the first anniversary of its grand reopening after a multi-million euro renovation, the historic Hôtel de Crillon on Place de la Concorde is putting on a free photo exhibition featuring nine imagined scenarios with noted former guests. These are not living, breathing former guests, however, but waxwork versions from the city’s Musée Grévin, photographed by Emanuele Scorcelletti in a project run by the Polka Gallery.

In one picture, imagine Edith Piaf singing La Vie en rose in the hotel’s former bistro, with Aznavour and Hemingway admiring her while Mick Jagger struts his stuff atop a piano. In another, see President De Gaulle outside standing next to his presidential Citroën...

For its 115th edition, the Salon d’Automne at 2 Pavillons on the Champs-Elysées in Paris will exhibit around 900 artists, from 45 different countries.

The event brings together not only artists with art world professionals but also it places art closer to its potential buying audience. A cultural programme, including concerts, conferences, roundtable discussions, readings, performances and a fashion show, enriches the exhibition over these four days. Meanwhile art from all disciplines is on display, from engraving, to sculpture, photography to digital art.

‘Everyone at the restaurant’ is, for foodies, the must-attend event of the autumn. It provides a unique opportunity to discover or rediscover the diversity, vitality and creativity of French restaurants by enjoying a ‘buy one, get one free’ meal at eateries ranging from Michelin-starred venues to cosy bistros and local brasseries.

The initiative was the brainchild of Alain Ducasse (see page 12 for some of his favourite recipes from his new book, Bistro). All bookings must be made through the website:

“For me, a painting should be like sparks. It should dazzle you like the beauty of a woman or a poem,” said Catalan artist Joan Miró, who is the subject of one of the major exhibitions to hit Paris this autumn. More than 150 of his works, gathered from the greatest European and American museums, as well as from private collections, feature in a retrospective moving from Fauvism through to Surrealism.

Subtitled ‘Entre les deux tours’ (Between the two towers) which refers to its tower-flanked portside location, this year’s jazz fest will be dedicated to its late artistic director, Didier Lockwood, the violist who died suddenly in February. The festival will celebrate his life with his musician friends like Biréli Lagrène, Benoît Sourisse, Diego Imbert, Olivier Hutman and violinist Fiona Monbet, as well as his brother, Francis Lockwood.

This multi-disciplinary arts festival, now in its third year (it is the result of the merger of two former festivals), sees the Nouvelle Aquitaine city come alive with theatre, dance, circus, music and visual arts in public spaces and venues, with the theme of this year’s being ‘paradise’.

The festival is keen to be socially pertinent and looks also to promote and support local talent, with great emphasis being placed on artists from the Nouvelle-Aquitaine region.

The 35th running of the Limousin Francophone festival in and around the capital city of Limoges, as well as Vicq-sur-Breuilh, La Souterraine and Tulle, is the place to enjoy artistic expressions of the French language.

The French capital will light up for a Saturday night to remember, with the return of the city’s ‘White Night’. Art lovers can enjoy installations around town or join in one of three tours, all related to the capital’s emblematic sights, running from 19.00. to 07.00.

Every year, the first weekend of October sees the cream of the racing world and attendant equestrian fans flock to the illustrious surroundings of Hippodrome de Paris Longchamp, Bois de Boulogne.

The flat race returns to a renovated Longchamp in 2018 after two years at Chantilly, with the main race for horses of at least three years old.

During the race weekend, jockeys and owners will compete for prize money approaching €10million.

Since its creation in 1990, this ‘Week of Taste’ educational event has been conveying the pleasures of taste to all gourmet audiences. It brings together 200,000 children, as well as professionals from ‘the land to the plate’ (producers, local authorities and restaurateurs).

One aim is to make children aware of the concepts of terroir, seasonality of products and a varied, balanced diet. A focus on seeds and plants will be on the menu this year and also there will be be low-cost menus laid on around France.

For the eighth year, the sublime grounds of Château de Chantilly, Oise, welcome green-fingered visitors seeking shrubs and plants. Over 200 growers specially selected by a committee will be supplying the greenery – from collection plants to the great classics –while there will also be tool and furniture suppliers on hand displaying wares to ease the gardener’s life.

In 1947, Pablo Picasso went to live in Vallauris on the French Riviera, and stayed until 1955. During this time, he created many sculptures and paintings including War and Peace, which was one of the major artworks of the period.

As a freeman of the town, Picasso greatly contributed to the renaissance of the Vallauris pottery industry in the 1950s, as a new exhibition at the town’s museum dedicated to him reveals.

The images reveal the surrealist’s creative process and a deep friendship between the two men, and intertwine intimate moments from 1950 to his death in 1989 with sculptures, prints and sketches from the artist’s collections.

With both seafood and farm produce aplenty, few regions come alive with autumn food festivals quite like Normandy. And given that this is prime cider country, apples (with some cheese for good measure) take pride of place at Conches-en-Ouches’ annual jolly.

Set in a lovely arboretum, this major event will promote for the tenth year running the region’s traditions, with a market of local producers and craftsmen, gastronomic tastings, demonstrations of know-how, exhibitions of farm animals and folklore groups.

Visitors can also enjoy the fruits of regional competitions for cider, honey and gingerbread, join in some fun and educational walks as well as traditional Norman games. Local culinary specialities will feature prominently on the catering front...

Organised by the Confrerie du Piment et du Axoa de Veau d’Espelette, the festival began in the 1960s to celebrate the end of the harvest and takes place every year during the last week of October.

There are 200 stands with Piment d’Espelette, other regional products and artisanal goods for sale. It is lively and colourful with plenty of Basque music from the Bandas who perform in the streets, houses decorated with cords of chillies, a traditional Basque dance show and a Pelote game.

On the Sunday, members of local Confréries (brotherhoods) form a procession in their different costumes after a Mass to bless the Piment and there then follows a ceremony in which new members are sworn in – they might be honorary guests such as chefs, local people or Basque sportsmen and women.