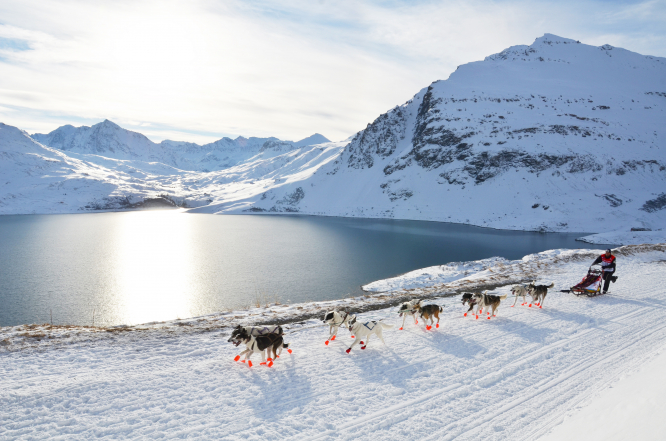 The Alps’ breathtaking scenery forms the backdrop to this high altitude dog sled race which sees the best mushers in the world go neck-to-neck over the course of 12 days.

Plunging through more than 700 kilometres of thick snow, the exhilarating race weaves through France’s Savoie and Haute-Savoie regions, taking in 22 different ski resorts before finishing in the Savoie gem of Val Cenis Lanslebourg.

La Grande Odyssée is classed as one of the most challenging races of its kind, both for the tough conditions and the different speed challenges for each leg of the journey.

After a firework display, the race gets underway at Samoëns passing through the Col du Mont Cenis Base Polaire at 2000 metres, Megève and Les Gets on 15 January.

At each village, spectators can feast on giant tartiflettes and mulled wine cooked up by local restaurants, while watching the 14 dog-strong sleds fly by in a flurry of snow. Snowshoeing and wintery walks are on offer or snuggle up with the pups at the end of their long day of racing.

The fire of the Andalusian dance pulls Nîmes out of its wintery hibernation, bringing flamenco’s evocative music and impassioned dancing to the Théâtre de Nîmes and other venues.

The city has been showcasing musicians, dancers and singers for over 20 years, featuring both emerging and established artists such as Arcángel (above).

Arrive with castanets and a volley of “Olé” because this is one not to miss.

Justin Hurwitz’ jazzy soundtrack is brought to life by a 75 person-strong big band playing live as blockbuster La La Land shows on the big screen. The Yellow Socks Orchestra accompany the six time Oscar winning film  – including one for the best original soundtrack.

Sit back and be transported to the land of showbiz as Emma Stone and Ryan Gosling tap-dance their hearts out on the silver screen.

Saraceno’s visionary installations are closer to science than they are art. In this immersive, multidisciplinary exhibition, he continues to examine humanity’s relationship with airborne ecosystems – carbon dioxide, cosmic particles – and ethically reconfigure our interaction with the planet. Step inside the silver bubbles, spidery cobwebs and geometric shapes of this eco-art project, where workshops, concerts and public talks transform the dream-like space into a “cosmic jam session.”

Become a veritable bee connoisseur at this fair, dedicated to the joys of honey.

Organised by the Rhône Bee-keeping Union, the show covers everything you could ever need to know about the sweet sticky stuff, including tastings, demonstrations and presentations on the world of apiculture.

From the highlands of south-west Vietnam, an impressive performance of dance, gymnastics and traditional culture comes to Le Quartz stage.

Nothing says winter in France like days spent racing down pistes then fireside nights with a fine bottle of red.

Combining the best of skiing and oenology, every evening of winegrower’s week promises an abundance of good food, wine and company. As well as the art of the bottle, there’s visual art too and winegrowers are more than happy to share their sommelier knowledge.

In the heart of the Périgord, spend a weekend in celebration of two prized French delicacies: the black truffle and foie gras.

Wander around the market, pausing to notice subtle differences in truffle varieties (usually by their aroma) and watch the fungus sell for eye-wateringly high prices.

Cooking workshops reveal the secret to concocting truffle-flavoured dishes and demonstrations explain how specially trained dogs hunt for them, known as the ‘cavage.’ French cuisine does not get more rich and flavoursome than foie gras, so expect to return home well satisfied.

Since 1974, visitors have been flocking to Angoulême in celebration of France’s 9th art.

From satirical comics for adults to children’s educational fiction (a copy of Astérix and Obélix can be found in every French home) the ‘BD’ as they are known, have a cult following both in France and in many countries around the world.

Inside huge festival tents, there are comic book signings, debates, workshops, conferences and artists unveiling their latest projects while illustrated concerts are dotted around the city.

Each year this travelling festival is held in a different village in Burgundy, hence the name ‘tournante.’ The festival of wine dates back to the Medieval era and this year, Burgundy’s winegrowers will unite in the idyllic village of Vézelay, to thank the patron saint of the wine harvest.

It is a great chance to discover some of the region’s lesser known – but equally good – vintages.

The ski resort of Gérardmer in Vosges turns into an unexpected cultural hub when 100 showings of fantasy films are projected across the big screens of four movie theatres.

European and Asian films are shown in their original versions with subtitles and it is a good opportunity to catch new material pre-release.

There are also sculptures, literature, theatre and fantastical street performances, as well as video gaming and speciality make-up booths.

Picasso said “Chagall will be the only painter left who understands what colour really is” and his colourful paintings provide the perfect break from wintery weather.

Chagall was part of many artistic movements, from Cubism to Fauvism and Expressionism, working with an astounding diversity of techniques.

Inside the magnificent 18th century Hôtel de Caumont, 130 works of art from the second half of Chagall’s life explore his oscillations between intense colour and monochrome etchings.

Short, bite-sized performances of 45 minutes come with a very reasonable price tag while for enthusiasts or for budding enthusiasts, there are plenty of opportunities to chat with composers and musicians.

The festival also pledges to support emerging musicians. Since it started in 1995, La Folle Journée aims to make classical music accessible to the widest possible audience.

This year’s edition is dedicated to musical creations born during travelling, modelled on Mozart’s symphonies that were inspired by his voyages across Europe, in particular to Prague and Paris.

In addition to Nantes, this year the music can be heard in concert halls across 11 towns in the Pays de Loire, from January 25 to 27. La Folle Journée has also taken place in Spain, Poland and Japan.

Inside the iconic waterfront building, the plethora of ways in which the human body can move are explored through film, documentary, sound tracks, ethnographic clips and sculptures (left).

It is a relaxing experience: stand up, lie down or sit down in the immersive exhibition space.

Dance is traditionally practiced in world cultures, employed in contemporary parties and is a natural part of human movement and social exchange.

It is as prevalent in the every day as it is in raves, formalised choreography and carefully rehearsed performances.

The exhibition takes the three pillars of space, time and body to ask the question ‘how do we dance?’