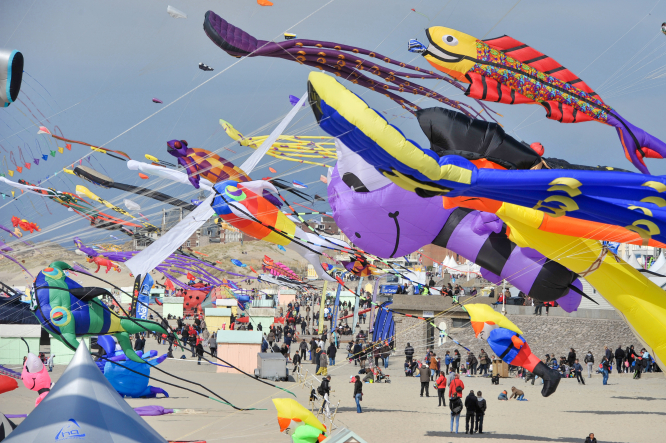 Festival des Jardins, Côte d’Azur, until April 28
Explore temporary Riviera gardens set up in different venues such as Nice, Menton, Grasse, Cannes and Antibes, with this year’s theme of dreamy escapes around the Mediterranean sea.

This new two-day ‘Veloshow’ event in the Gard combines cycling and music. While biking people will be able to see BMX and music shows along the route, on Sunday night, different music artists will perform in Sommières.

On the first day, bikers will cycle from Sommières to Cavisson and on Monday, to the famous Pont du Gard, where the last concert will take place. Multiple activities related to bikes and concerts will be organised at the Esplanade of Sommières throughout the weekend.

To take part in the cycling you need to reserve a place in advance. www.veloshow.fr

Art Paris Art Fair, Paris, April 4 - 7
Around 150 art galleries will pop up under the roof of the splendid Grand Palais. The international exhibition aims to make contemporary art accessible to everyone by mixing styles from all around the world. Twenty different countries including as Brazil, Mexico and Cuba will be represented as well as several European countries.

The exhibition is themed around Latin America but will also highlight some French female artists. www.artparis.com/en

Les Rencontres Internationales de Cerfs-Volants gathers more than 500 professionals from all around the world to offer a spectacular show of colourful kites filling the sky.

The international event brings thousands of visitors every year from all over France for a whole week of demonstrations and outdoor spectacle. People can practise together on the beach but also just enjoy the kite show. This year the theme of the kites is travel, poetry, dreams and magic.

A new feature is the ‘wind garden’ on the beach where water mills, flowers and animal figurines created with recycled material will offer a show on their own thanks to the movement of the wind. It involves 20 people, making the beach look more lively than ever.
Illuminated kites and fireworks close the free festival on Saturday. www.cerf-volant-berck.com

It is the perfect moment to eat a pomme d’amour (toffee apple) or some barbe à papa (candy floss) while winning a teddy bear with some handy rifle shooting. https://tinyurl.com/y5ea8vfe

Paris-Roubaix Challenge, Roubaix, April 13
The well-known cycle race with different levels and paths of 70, 145 and 172kms is dubbed ‘The Northern Hell’, due to its difficulty included riding over cobbles.

It is open to all riders with professional cyclists racing the next day – when everyone is invited to watch.

It is the perfect opportunity to discover more about records and meet fellow enthusiasts. Lots of record shops will be open, offering their best and rarest records while music will be celebrated with some free concerts. www.tinyurl.com/y2yobe49

Andy Summers’ photography exhibition, Pavillon Populaire, Montpellier, until April 14
The exhibition called ‘Une certaine étrangeté, Photographies 1979-2018’ by Andy Summers is a mix of private photographs related to the career of former bassist of The Police.

Not only a musician but also passionate about photography, he reveals his backstage life through images. He chose 400 images and composed his own background music for this exhibition. www.tinyurl.com/yxn9c6b4

Here is an unmissable event for keen twitchers and nature lovers based in northern France: Abbeville in Somme hosts a nature and bird festival each springtime, the best time to observe the animals in situ.

Nature trips, craft activities and tours with expert guides can be enjoyed during the 10-day event, and you can explore the wider Baie de Somme area on horseback, bike, boat or by foot. Almost 40 outdoor activities are organised throughout the festival while there are also games and shows for children, notably at the ‘Zoizillons’ space in Emonville’s park.

A fun option for an exploration of the history and the nature of Saint-Valery-sur-Somme is from the back of a tuk-tuk.

Given its photogenic surroundings, the event is a big draw for photographers and film makers, and more than 20 photography classes will be held during the event. At the end of the festival, a film and photography contest will reward the best picture and movie.

Elsewhere, forty art exhibitions, including paintings, sculptures and photography, are also organised in the towns around Abbeville. www.festival-oiseau-nature.com

Printemps de Bourges, Bourges, April 16 - 21
The music festival announces the beginning of spring in Bourges (Cher). With over 150 different groups and artists, Le printemps de Bourges is one of the most popular festivals in France.

From hip-hop to rock and electronic music, different musicians from all around the world share the stage for five days. Among them, famous French singers like Zazie or Maître Gims are as eagerly anticipated as much as new artists like the rapper PLK or Muddy Monk.

Other free concerts will take place in the city centre of Bourges. www.printemps-bourges.com/

The market has four sections: antiques, old books, contemporary art and design decoration while around 250 town’s shops take part in the foire to show their most beautiful items in the streets.

Experts are available to give advice and more information on the origin of items. www.foire-isle-sur-sorgue.fr

Marathon de Bordeaux Métropole, Bordeaux, April 27
Bordeaux’s marathon is a popular event where people meet in front of the Palais de la Bourse and start running when the sun goes down.
Different paths can be chosen: relay race, marathon, or half marathon.

The different routes take runners all around the city and its monuments while also going through famous local vineyards. Thousands of visitors come to watch the runners during the night. www.marathondebordeauxmetropole.com/

Europajazz, Le Mans, April 27
Europajazz is a jazz festival organised by different associations in the Sarthe capital. As part of the festival, they take over the streets of Le Mans and play music all day long. Wherever you are in the city, walking, shopping, or having a coffee you will be able to enjoy live music being played nearby.

A music village including stalls selling vinyl records will also be set up on place de la République. www.tinyurl.com/y4u9m3n6

The light show in Chartres starts at the end of the month. The event offers a magic show every night by lighting up several monumental buildings in the city centre. Twenty-four streets and buildings are illuminated in different ways from the beginning of Spring to Autumn.

The renowned Notre-Dame cathedral, the fine arts museum and its garden, the Apostrophe library and the theatre are some of the best spots to enjoy the show. As you walk from one street to another, you can enjoy the illuminations and music shows on the town’s bridges.

While there is no special route to follow for the event, the city does offer guided tours every Saturday night as well as night train tours which start at the cathedral.

Every year, around one million people come to visit the city en lumière and while the event is free, prices of guided tours can vary between €6.50 for children and €17.50 for adults – according to the month you choose. www.chartresenlumieres.com/en

Claude Monet lived in the Normandy village until he died in 1926. His house and his garden are now part of the Fondation Claude Monet, and are open to visitors. www.tinyurl.com/y2gpp4ts