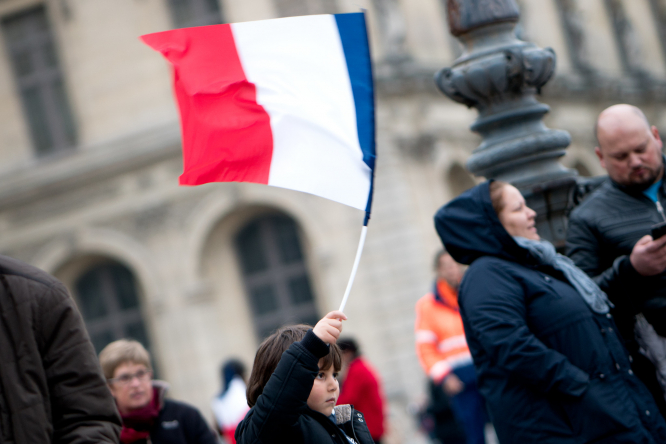 2017 French election celebrations for Macron's victory at The Louvre, Paris
By Simon Heffer

In just over a year the French electorate will start choosing whether Emmanuel Macron serves a second term as president, or whether the Elysée Palace passes to a new incumbent.

The fight has begun, but most commentators seem to think that the field, although technically large, is really about two main participants.

The recent tradition in French politics is that the electorate can be relied upon to vote tactically, with a protest vote for the Le Pen candidate – either the present leader of the Rassemblement National or her father when he led what was then called the Front National– but nonetheless ensuring they do not win when it comes to the second round.

However, those days may be over.

In February, an Ipsos-Sopra Steria poll’s prediction for the second round was M. Macron winning by 56% to 44% but the Harris Interactive poll had him winning by just 52% to 48%.

That is within the margin of error: One recalls, for example, that the exit poll on June 23 2016 in the UK referendum on EU membership called it at 52% to 48% – for Remain.

Within hours it was clear Leave had won, by the same margin.

M. Macron has had a rough passage in recent months. His handling of the coronavirus pandemic has attracted huge criticism, notably for France’s slow roll-out of the vaccine.

Nor did he do himself or his credibility any favours when he petulantly claimed that the Oxford vaccine did not work for those over 65 – an assertion marred only by the fact that there was, and still is, no evidence for it.

'The pandemic and its woeful effect on France’s economy – which will have to be put right – are not M. Macron's only challenges'

Since the horrific murder last autumn of Samuel Paty, the schoolteacher who had showed his students cartoons of Mohammed, M. Macron has been pressed to improve his administration’s defence of republican values.

The pressure has come from two directions: From a public disturbed by the high incidence of terrorist activity in their country, and who feel the state is failing in its duty to protect them, and from an opposition in the shape of the RN, who have been arguing for a hard line on this since before M. Macron went into politics.

The Macron team know they ought to win the election next May, but those who are honest know they have done pitifully little to merit such a triumph. They continue to be well served by the low profile, or near invisibility, of the other main parties – Les Républicains, La France Insoumise and the Parti Socialiste.

The last two of these continue to do M. Macron and Mme Le Pen the service of splitting the leftist vote, thereby ensuring a left-wing candidate does not reach the final round.

Indeed, France’s best chance of a government embracing a few socialist principles seems these days to be to elect Mme Le Pen as president, given the highly interventionist and regulatory view she and her party now take of many business and economic questions, with the apparent intention of charming France’s influential syndicalist movement.

Les Républicains, who were on course to win the 2017 election before scandal submerged François Fillon, are a distant third in the polls.

Still rebuilding and smelling of disunity, they are only likely to vie for a place in the last two if they can come up with a Technicolor candidate – such as Rachida Dati who, for all her charisma, experience and glamour, divides opinion in party as sharply as every other prominent player – to challenge M. Macron.

The proximity of Mme Le Pen to M. Macron in the polls is even more worrying for the president than it seems.

First, she appeared to have buried herself more or less for good in 2017 when she performed poorly in the televised debate with him.

Second, she has been prevented from doing one of the things she is really good at – widespread public campaigning – by the restrictions imposed by the pandemic.

Third, the RN’s performance in the municipal elections last year was unimpressive.

Fourth, since a newspaper disclosed last autumn that Mme Le Pen had obtained the necessary qualifications to be a cat breeder, there has been sniping that she was busy preparing for a congenial career after her inevitable defeat in 2022.

'It turns out that Mme Le Pen’s enforced, and before that tactical, low profile has erased her shortcomings from voters’ memories'

What is more the pandemic has not been an ideal time for a politician in France or anywhere else to have high visibility, given the inevitable desire of the public to apportion blame for the equally inevitable mistakes that are made in handling the first such public health catastrophe in 102 years.

Her resurrection has instilled desperation in some of her opponents, notably the interior minister, Gérald Darmanin, who in a television debate in February accused her of going soft on Islam in order to re-brand her party as one not of bigots and neo-fascists.

She is not the Algerian War paratrooper her father was, with all the views that go with it. However her instincts are clearly to defend French values and the French way of life unequivocally, and M. Darmanin’s foolishness in accusing her of doing otherwise caused him to be turned on even by his own party, some of whom sought a retraction and warned him up to shut up and not say such a thing again.

There are still 14 months to the poll and much can happen. But it is at such times that an incumbent, in particular, is at the mercy of events.

That, more than Mme Le Pen specifically, should worry M. Macron - especially because one suspects that, so far as the pandemic and militant Islam are concerned, the story is far from over.