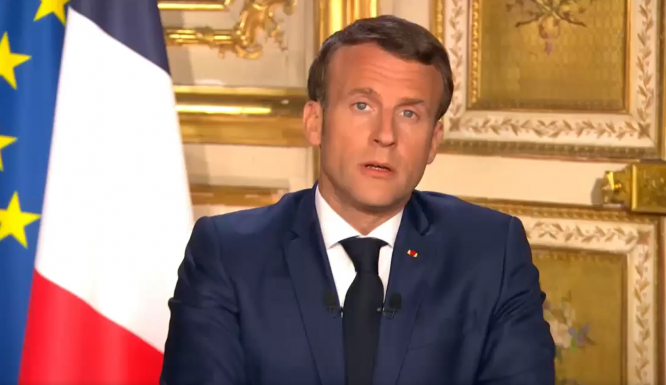 Although few Britons watched President Macron’s televised address on the evening of 13 April, they heard and read reports of it afterwards with a certain envy.

The President, unlike his British counterpart, gave his people a clear understanding of when lockdown would begin to end; and suggested a skeleton timetable for how the return to normal life in France might evolve until mid-July and beyond.

The British have had no such indications from their leaders. For much of April the Prime Minister, Boris Johnson, was hors de combat.

He had given a pretty poor lead before he went down with the coronavirus, blustering for much of the time and missing vital cabinet committee meetings.

While ill, he appointed a deputy, but failed to give him the requisite authority to do his job; which caused several cabinet colleagues to start squabbling.

By contrast, what has happened in France has been a cakewalk.

How it might develop up to and beyond May 11 is, though, anyone’s guess. By mid-April, as the evenings became lighter and the days warmer, trouble broke out in Parisian banlieues and elsewhere because of supposedly over-zealous police enforcement of lockdown restrictions.

The authorities refuse to admit there are any no-go areas in France for the police; but there are.

The anger some in the banlieues feel about the police enforcing lockdown is what they feel all the time about them coming anywhere near these areas.

France’s existing social problems, which the powers that be like to pretend either don’t exist or are blown out of all proportion, are being exacerbated by the need to deal with coronavirus.

Containing them in the days and weeks to come could severely stretch not just the resources of the French state, but its credibility.

Although the law in Britain, passed in an emergency in March, allows courts to fine those breaking lockdown, these measures have been used only rarely.

In keeping with the often amateurish conduct of the crisis by the British government, the guidelines for interpreting the law were vague, and largely remain so. Hence the outrage when the chief constable of Northamptonshire warned reporters that police could start checking shopping trolleys: there was no such provision in the new law.

An apology and retraction were forthcoming.

In France, fines have been levied extensively and, unlike Britain, attestations are needed to leave home, to ensure people do not stay out, for example, for more than their allotted hour for exercise.

In a state where bureaucracy is a less dirty word than in Britain, these strictures have been accepted; had they been tried in Britain, civil disobedience would almost certainly have resulted.

As things are it cannot be ruled out, especiallyif the UK government continues to infantilise the public by avoiding a Macron-style plan for the end of the present nightmare.

However, it is unlikely to be plain sailing for Mr Macron. The French economy, like the British, will be in a fearsome state when lockdown ends; but we must remember that it was in a worse state than Britain’s in many respects before the crisis.

Unemployment was already nearly twice the rate of Britain’s; the currency was overvalued and, withoutthe agreement of the Germans, incapable of being devalued; and France is famously over-regulated, especially in retailing, compared with Britain.

As in Britain, a proportion of the small businesses that have closed are unlikely to re-open, at least under their former proprietorship.

In a country that depends far more heavily on tourism than Britain does, the elimination of half or three-quarters of the normal high tourist season could have a catastrophic effect on local economies with no other obvious means of support.

President Macron’s suggestion that there might be a slow return to normal by mid-July would, if it turns out to be true, at least enable something approaching a tourist season.

If it goes on beyond that, whole areas of France could suffer an economic devastation that would be beyond the wit of the greatest imaginable government to repair quickly.

Speculation is that bars and restaurants may re-open as early as June 15; but the industry has pointed out that if social distancing means they must run at half their previous capacity, their business model will break.

This is the sort of issue about which difficult decisions must be taken. The president and Edouard Philippe, his prime minister, will have to make a judgment that plays off casualties of this pandemic with what is already likely to be the worst economic downturn since the 1930s, and the carnage that could cause.

The president’s address on April 13, at the best part of half an hour in length, certainly constituted a full and frank exposition to the French people and, more to the point, the French electorate.

He could scarcely have been more thorough; but then, unlike his British counterpart, he has a command of detail and a serious work ethic.

Whether these unquestioned virtues are sufficient to allow him to ride out the waves of criticism that will come when the full extent of the economic wreckage becomes clear, like so much else in this entirely unpredictable climate, must remain to be seen.

In the next few weeks, especially, the greatest threat to the future stability of France is not the further deaths that might result, not least from France’s failures – shared with Britain – in testing, but from people living in cramped conditions who have had enough of confinement, and wish to protest about it.

And they will be followed by middle-class shopkeepers and restaurateurs who see their livelihoods standing on a knife edge.

The most challenging phase of this crisis is yet to come for all of us.