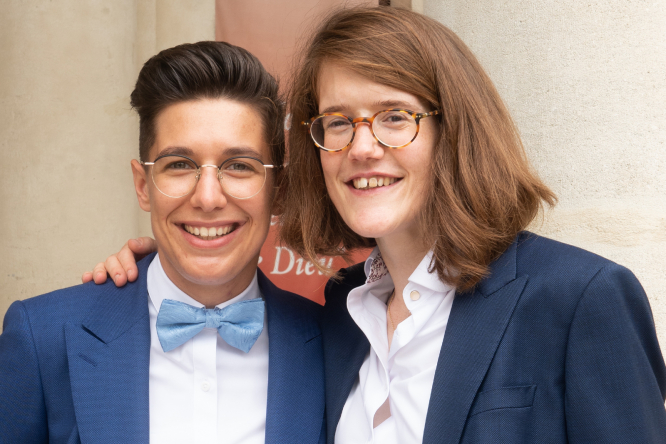 The world is moving on and churches have to keep up, say women pastors Emeline Daudé and Agnès Kauffmann, who recently got married.

Their civil service in the mairie at Jacou, Hérault, near Montpellier, was followed by a blessing in the city’s Temple de Maguelone.

The Eglise protestante unie de France, the country’s main Protestant church, has allowed same-sex marriages since 2015, but they remain rare and this was the first time two female pastors were blessed.

“After such a long period of being banned, it’s not surprising that people don’t think of it,” said Ms Kauffmann.

Ms Daudé added: “Obviously, we didn’t get married as a publicity stunt, but afterwards, we decided to talk to the press about it to demonstrate that these days it is increasingly normal for same-sex couples to have their marriages blessed in church.”

In France, it is not possible to be married in a church. All marriages take place in a mairie, but are often followed by a religious blessing in a church.

The Catholic church does not give blessings to same-sex unions, and neither do all Protestant churches.

“Most evangelical Protestant churches in France do not have women pastors in charge, and do not bless same-sex marriages,” the couple said.

The Eglise protestante unie de France is the result of the 2012 amalgamation of the Reformed Church of France and the Evangelical Lutheran Church of France. It has 450 parishes and more than 1,000 places of worship spread over nine regions.

It was important, said the couple, to show the world that it is entirely possible to be not just a female pastor, but a lesbian one too. “We also wanted to honour the people who have struggled before us, who have made this possible – all the people who supported the fight for samesex marriage, and people in the church who fought to establish that love is not a sin or a disease. Same-sex love does not need to be healed.

“In the past, people couldn’t get married, but now they can, and we celebrate that.”

As religious ministers themselves, it was important to the couple to have their union blessed in church.

Like the majority of couples, they wanted their wedding to be official – and public.

To that end, it was significant to them that during their blessing the door of the church was left open, as a sign that this was not secretive or shameful or in any way to be hidden.

“We want to show that not all Christians are old-fashioned conservatives, but there are churches which are open, modern, and progressive, and which support changes in our society. We would like to see same-sex marriage become completely normal, just like it is for opposite-sex couples.

“Who knows when it will happen, but we hope it will.

As pastors, although they work in different parishes, they both say that blessing other couples is a joy, in particular same sex ones.

“We see their gratitude to be able to celebrate their marriage in public.”

There is no formal record of how many same-sex couples have been blessed in France, but Ms Daudé believes the number is low.

“We had a lot of support from our families, and also from within the church. But in the past, churches have maltreated gay people, and in some places they still do. So we have to keep working and let people realise they can come back to more progressive churches.”

15 hours ago
4
Covid-19: Rules for travel to and from France

Exploring mountain refuges and cabins in France
19 October 2021
More from Opinion
More from Connexion
Get news, views and information from France
Join the newsletter
Subscribe to The Connexion