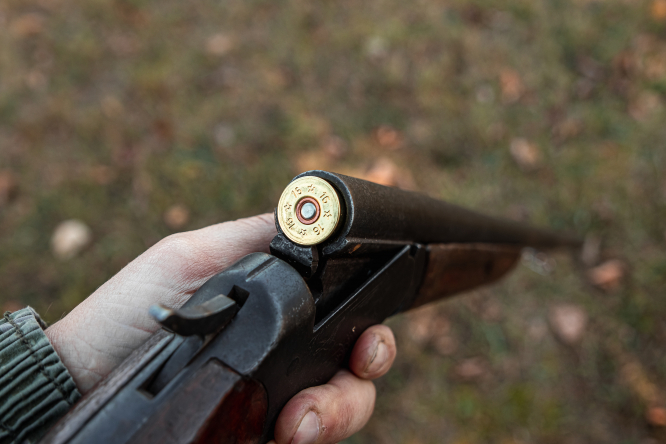 In France, you have to do two theory classes and two practical classes before you are able to do your exam to get a hunting permit Pic: Marko Aliaksandr / Shutterstock

Getting a hunting permit in France and training

I first went to the federation website that handles hunting for the department in which I live and printed out the application forms for a hunting licence and started writing cheques.

A few weeks later, I received a letter informing me of the dates that I will have to be at the classes and training sessions in order to get the hunting permit.

I thought that it would be on the weekends but nope, not at all. It was all scheduled during the week and the training was during work time. The classes, at least, were after work.

The way it works in France is that you have to do two theory classes and two practical classes before you are able to do your exam.

For the theory part, there are two DVDs that you have to watch.

One is for gun safety and one is about animals, their habits, which ones are protected, etc.

There is also a book with all the animals and all the questions that they can ask during the exam. There are 414 in total – but only 10 will be asked during the exam, with one question being a disqualifying question.

The other part of the exam is practical. You have to do a 'parcours' –  a walk-through, with a loaded shotgun (shells with just the primers without lead), while observing all the security rules etc.

I went to the first theory class and it was all being presented by volunteers. They made it clear that their job was to help us pass the exam and teach us about gun safety and security – not to teach us how to hunt.

Having not yet received my book or DVDs, it was quite an eye-opener about which questions would be asked, etc. For example, what is the mud bath in which a boar rolls itself in called? Or, on a deer, what is the name of each branch of the horn? Also all the dogs and what type of hunting they are used for, etc.

Luckily, I had more than a month between my first and second class and applied myself to it. My wife and daughter now also know all the animal names and their habits because I would put it on the TV in our room every night before bed and every morning while getting dressed.

At the second theory session I did well and right afterwards we had a firearms session where they would show all the guns that we would be using etc. They had side by side shotguns, over and unders, semi-automatics, drillings, express, etc.

The next day was the first practical session. It was in an area around 100km from my house and I had to put in a half-day of leave at work.

I got there and went through all the explanations. Then it was time for the first parcours.

French gun security demands that you unload your weapon when you get to an obstacle, like a ditch or a fence. Always make sure that you point your gun in a safe direction when unloading and loading.

Then when you have crossed the obstacle you have to check the barrels to see if you might have got dirt in them, load them and close the gun in a specific way by tilting it and then lifting the gun in a safe zone.

During the parcours you also have to 'shoot' at clay pigeons with the unloaded shotgun shells while making sure that your shot is in a safe zone, i.e. not where you can't see what is behind, not in the direction of the cars or in the direction of a human silhouette that pivots.

Also, the clay pigeons have different colours and the red/orange one is supposed to signify a protected species. You can even shoulder the weapon if the red one comes out and it is at random.

Then you carry on and at the end of the course, you must pack the shotgun away in either a case or a bag. Over and unders have to be broken up if they go into the case. During the exam, it is the examiner who will tell you where to put the gun.

After that, you must shoot two real shells at clay pigeons. You don't have to hit. You just have to do it in accordance with the security rules. Then all the way back to the start and unload the gun before handing it back to the examiner.

The next step is to shoot at a simulated running boar in the driven hunt situation.

It works more or less like this: You get taken to your post – you indicate where it is safe to shoot and where not. Then you signal yourself to your neighbours on both sides, in this case, two model humans. You then have to measure out your 30-degree angles on each side. Five paces to the side and three forwards, you then place a marker, on both sides.

You then go back to your post and indicate that you hear the signal of the start of the drive and have to remove the bolt from your gun, check the barrel and put the bolt back if it is clear.

You then get handed three dummy bullets that you have to load into the gun and unload again. Then you get another dummy bullet and two bullets loaded with soft plastic points that don't shoot further than 200m.

The dummy goes in first and then the other two. You then close the bolt while pointing the gun to the ground, check the safe zone and bring the gun up.

You place yourself towards the area the boars are supposed to come from and indicate to the person that you are ready. You then have to say: "I hear a sound. I check what it is, it is a boar", then while turning and waiting for it to clear the 30 degree angle, you shoulder your weapon and shoot at it.

You don't have to hit it, but everything has to be done safely. Then it must be repeated with the second bullet. Then you have to announce that you hear the trumpet that signals the end of the drive, unload your weapon, keeping the bolt open and pick up the cases and put the markers back etc.

I had to go for the practical training twice and much too soon it was the date of the exam. I spent the whole morning at work on the internet passing mock exams (shhh, don't tell the boss).

I got there an hour before I was supposed to but better early than late.

I had to sit under a tree outside while the wind was howling, and it was rather cold. There were people that started an hour before us and the signs were not good. Two of the three people failed.

One failed because he went over the first obstacle with a loaded weapon. When the examiner told him that he can go back to the hut because he failed, he started talking loudly which soon escalated into shouting and trying to intimidate the examiner. After failing, you have to wait a year before trying again.

Soon it was my turn – I got the instructor that just failed the guy.

I went inside and gently said Bonjour and shook hands with him. He looked at me and asked me why I'm so big and have an accent. I told him I'm from South Africa and I play rugby. It turned out his daughter lives in the town for which I play and he's played there before.

Off we went and the guy interrogated me about hunting in South Africa. He commented on my ease with which I handled firearms and asked if I did a bit of poaching. I told him I started hunting with my father at age five.

The parcours went well and then it was time for the running boar part.

I made a slight error when one bullet slipped from my hand and into the chamber while I was loading it. I couldn't shake it out, so proceeded to completely unload the weapon and then recharge it. I lost one point for it. After that, everything went perfect, and my two shots passed without incident.

You sit in front of a computer and 10 questions come up and you have to answer within 10 seconds. I only made one error, confusing one species of owl's call with another.

The examiner then tallied everything and congratulated me. I passed the whole exam with 29/31.

He made out a temporary permit and told me where to have it validated.

I only learned later that politeness counted for 3 points – saying bonjour and shaking hands and not being rude.

I went to the federation to have my license validated and had to buy insurance as well. All in all it cost €110 – and I am now able to hunt big game all over France.

But having the permit validated doesn't give you the right to start shooting where and when you want.

You must join the hunt in the area where you want to hunt and that costs a few euros too.

I wanted to join the hunt in the village next to where we live. They said that it will be €120. But when I gave them my address they changed their mind because I live in another village. They said it would cost €350 instead and it would take one month for it to be validated.

So I joined the hunt for the village in which I live – it was €100, which was half price because I joined late in the season.

Ray’s name was changed for this article as he did not want to face discrimination for being in favour of hunting. He is 41 years old, originally from South Africa and now lives in the Bouches-du-Rhône department in southern France

La chasse 2021: How to block hunters from using your land in France

Artisan soap maker: 'After six years, it still gives me a thrill’
22 October 2021
More from Your views
More from Connexion
Get news, views and information from France
Join the newsletter
Subscribe to The Connexion