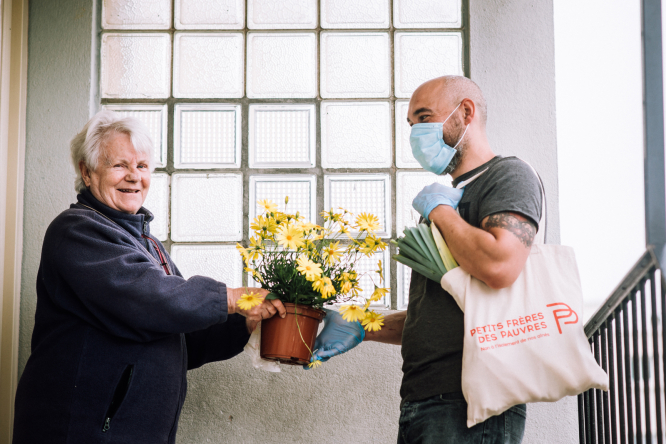 Petits Frères said it is not big enough to help everyone, and wanted to alert the public so all people can play their part Pic: Petits Frères des Pauvres

Charities fear increased poverty and loneliness following the epidemic will hit hard at Christmas after a study found twice as many over-60s with almost no social contact with family, friends or neighbours as in 2017.

In addition, 36% of elderly people, about 6.5 million in all, say they feel lonely frequently and 14% are lonely every day.

The charity’s Meryl Le Breton said it was an alarming increase in four years: “It is partially because of Covid-19 and lockdown, but there has been no improvement since the worst of the health crisis was over, and figures are also high because of rising numbers of the elderly in the population.”

Petits Frères said it is not big enough to help everyone, and wanted to alert the public so all people can play their part: “We all have a role to play. We developed a chasseur de solitude kit giving advice on the best ways to make contact with a solitary elderly person.”

Every Christmas, charity volunteers take gifts and spend some time with those who cannot leave their home, and organise festive meals and tea parties for those who can. All who want to help can contact their local branch to see if they need volunteers.

Secours Populaire Française also helps people in poverty and its annual study, done by Ipsos, shows that this year 55% know someone who is poor, 32% have difficulty paying the rent, and 30% cannot afford three healthy meals a day. Half those questioned said they had seen their income fall in the pandemic and it had pushed many into poverty. Today in France, nine million live below the poverty threshold.

Every Christmas, it sends out green-suited Santa volunteers to collect money, food and toys to help the less well-off enjoy the festive season.

Anyone who would like to put on a green bonnet and participate can get in touch with their nearest branch.

You can also contact your local Croix-Rouge branch to see if they need volunteers at Christmas.

Les Restaurants du Coeur feeds those in need, among its many other activities, and seeks volunteers in December to raise money by wrapping presents in shopping centres.

Find sites here where you can help.

charity
Croix-Rouge
elderly
More from Your News
More from Connexion

Can I pay a UK cheque into my French bank account?
22 January 2022
More from Your News
More from Connexion
Get news, views and information from France
Join the newsletter
Subscribe to The Connexion