France's Gilets oranges feed the world all year round 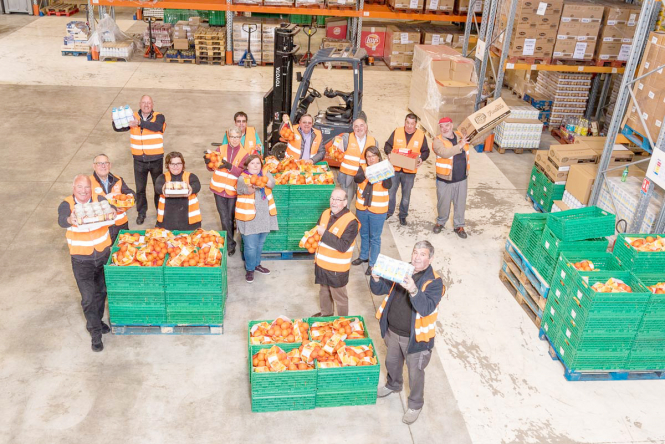 They work for a little-known but vital charity that collects food from supermarkets and farmers, then distributes it to the needy in a co-ordinated network across the country.

This is the Banques Alimentaires, which provides half the food given out for free in the country every year. It ensures that two million people get decent meals they would not otherwise be able to afford.

With around 100 warehouses across the country, it relies heavily on its 6,000 volunteers, the gilets oranges, who make up 90% of its workforce.

The organisation, the first food bank in Europe, was set up in 1984 and modelled itself on initiatives in Canada and the US.

Sister Cécile Bigo issued an appeal in the newspaper La Croix: “Man has invented ways of going to the moon. Cannot his heart invent a way to put an end to food waste and feed all of humanity?”

President Jacques Bailet, himself a volunteer, says that not many people realise the huge logistical effort behind fetching and sorting the food: “The aim of our organisation is to fight both against food waste and lack of food for some people.

“Unlike other organisations, such as Restos du Cœur, we do not buy any of our food. We collect 113,000 tonnes every year, of which 73,000 tonnes would otherwise be destroyed.

“For example, a supermarket cannot sell a bag of clementines if one of them is rotten. But we can open the bag and use the good ones.

“Supermarkets place orders for ready-made sandwiches every morning, but the sandwich makers cannot know what the order will be in advance and so they make more than necessary. Sometimes we can pick up as many as 4,000 sandwiches which would otherwise be thrown away. We also get food when the public donate during national collection days.”

Mr Bailet says the work of the association saves a needy household €92 a month on average, which is vital to help the poorest people meet their bills at the end of the month.

He says being a volunteer with the Banques Alimentaires is rewarding: “I find I meet people I would never have met otherwise and it is something that we enjoy, as well as helping others. We welcome all kinds of skills, from driving lorries, working with computers, logistics, sorting food or going to companies to persuade them to hand over their food waste to us. A centre may be processing 4,000 to 5,000 tonnes of food a day so we always need help.

“You can come for half a day a week or every day... just whatever suits you.”