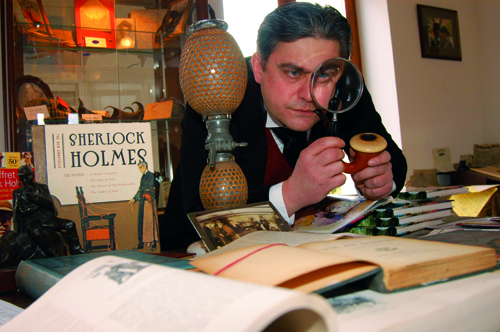 President Thierry Saint-Joanis believes he is onto something

A French club celebrating London’s most famous detective, the Société Sherlock Holmes de France, boasts more than 2,500 members. The club’s motto is: “The one thing Sherlockians should be serious about is not taking themselves seriously.”

Anyone who is curious can sign up for free on their website and benefit from a wealth of varied information touching on the biography of Arthur Conan Doyle, the original works and the several films, TV series, other novels and even video games that have been inspired by Sherlock Holmes.

Members meet up to discuss their hero and once a year will get together to re-enact a scene from one of the books in period costume and, if possible in the actual place where it took place.

The club hopes to set up a museum dedicated to the work of Sir Arthur Conan Doyle and the life and methods used by his fictional character.

The French club has existed for 23 years. It is one of 300 in the world, with most being situated in the US. The first one began in 1934. Members in France decided to create their own branch in 1993.

Club president Thierry Saint-Joanis cannot understand why the British cross the Channel to live in France as his dream is to live in the UK. At his home he has a recreation of Sherlock Holmes’ sitting room at Baker Street: “Of course we would welcome English-speaking members. Anyone who likes reading the stories, or likes detective books in general, is interested in crime solving methods, likes any of the films and TV series or is interested in the Victorian period can join.

Mr Saint-Joanis travels the world meeting up with other Sherlock fans. This year he will be in Dives-sur-Mer where he has created an elaborate detective quiz for the anniversary of the Battle of Hastings where Sherlock Holmes has to find the treasure left by one of William the Conqueror’s comrades-in-arms in the 11th century: “Though the story is of course fictitious I researched the historical detail to make it as realistic as possible.”

He has also looked back through records which he thinks makes it certain that Sir Arthur Conan Doyle was a descendant of one of the French families who crossed over to England in 1066: “I am convinced that French blood flowed in his veins.”

He is also impressed by the fact that Sherlock Holmes spoke impeccable French and has even researched what accent he might have used during an incident in one of the books which takes place in Montpellier.

Mr Saint-Joanis says it is always a pleasure to meet up and discuss Sherlock Holmes with other members and the re-enactments are always very interesting: “When you put on the clothes of the time you get a much greater understanding of the story. We went to Dartmoor and could really feel how difficult it must have been to have run after the Hound of the Baskervilles in tweeds and the heavy leather shoes of the time.

Find out more on www.sshf.com